As the generation of Holocaust survivors ages on, we are bereft of heroes who withstood the worst time in our collective Jewish history and lived to role model the character, strength, and emunah that forged the renewal of our Jewish nation. This past week, klal Yisroel once again found itself at a loss as we mourn the p’tirah of an ishah chashuvah, Fran Laufer, aleha ha’shalom, who personified all of the ideals of an eishes chayil both in the personal and public arenas. 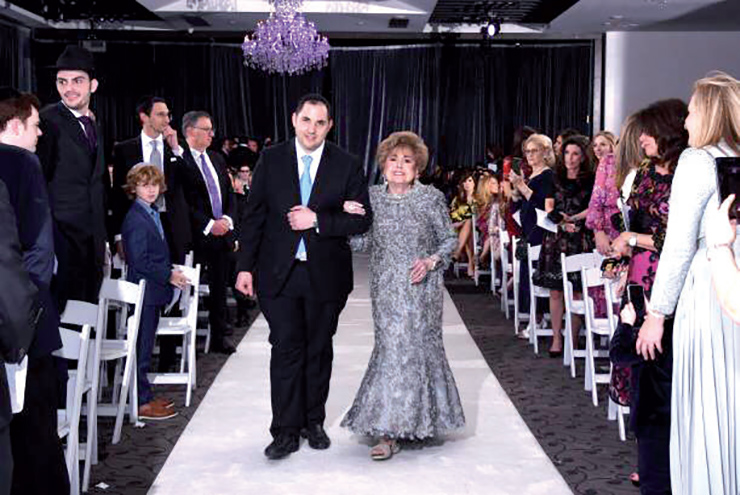 Frimit (Frimciu) Fuchsbrumer was born in Chrzanow, Poland, 96 years ago. She had an idyllic childhood enjoying a close, loving relationship with her beloved parents, Reb Shlomo and Zlata (Lotta), and her brother Benek and sister Golda (Goldzia) and aunts, uncles, and cousins. The family was very comfortable, successful in business, and devout in their religious observance. This utopian existence abruptly crashed in 1940 when Chrzanow was incorporated into the Third Reich and was cut off from Krakow and the Nazis (yimach sh’mam) instituted laws that drastically changed everything. The Germans took over the family business and did not allow her parents to work there, but they recognized Fran’s business acumen and had her work the business, while turning over the revenue to the Reich. In 1943, her parents and aunts and uncles were rounded up and taken to the waiting trains, never to be heard from again. At the young age of 17, Fran was left with the awesome responsibility for her 15-year-old brother and ten-year-old sister, and not long after that, she lost them, too, in an action; but Fran managed to escape and was left alone to survive. After that aktion, Fran was sent on a train and began her journeys through Poland to different labor camps. She worked hard and survived, though barely. Upon her liberation in Bergen-Belsen, she was emaciated and sick with typhus. She was literally at death’s door, but managed to stay alive – and there she met her knight in shining armor, Shimon Laufer, a fellow survivor who fell in love with her and promised to be her father, mother, sister, and brother. 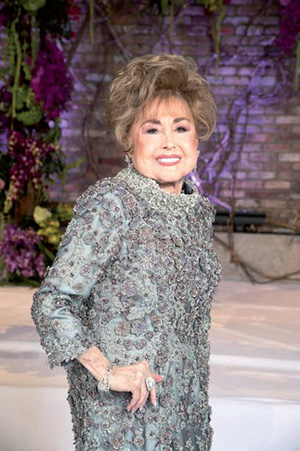 Shimon and Fran married on October 15, 1945, the first wedding since the liberation of Bergen-Belsen. They lived in Celle, Germany, until they were able to immigrate to United States in April 1947, and they started their American life in the Brownsville section of Brooklyn, New York. Both Fran and Shimon worked hard in whatever jobs they could find, and eventually their entrepreneurial spirit propelled them towards the American dream. Despite her great fears that her illnesses during her incarceration would not allow her to have children, Fran and Shimon were blessed with three daughters, Lottie (Morgenstern), Suzie (Rozner), and Gayle (Yashar).

Shimon and Fran were blessed with happiness and prosperity in America, and enjoyed a wonderful life, and always looked to help those less fortunate than them, and to build yeshivos, shuls, and communities. Hashem rewarded them for their chesed and they continued to prosper. They bought their first home in Hillcrest, Queens, and worked together with Rabbi Sholom B. Kowalsky to grow the community. Fran became President of the Sisterhood, and Shimon the President of the Young Israel, and together they spearheaded and accomplished the building campaign for the new building of the Young Israel. This dynamic couple was nicknamed Mr. and Mrs. Young Israel of Hillcrest for their invaluable contribution to the shul and to the community. 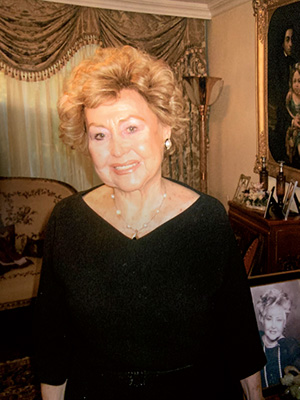 Fran continued to move forward, and attended the NY School of Interior Design where she excelled. Her penchant for beautiful things led her to open The Fran Laufer Collection at 200 Lexington Avenue in Manhattan, and she was represented in design centers across the USA. It showcased handpicked, beautiful objects d’art, furniture, and lighting from all over the world. Once again, her acute business acumen and impeccable taste led her to success as she was awarded the International Society of Interior Designers Distinguished Service Award in recognition of her dedication to the trade.

As Fran was always moving and forging ahead, she decided to move on to Great Neck, New York, where there was another Jewish community to grow and build. They became active in the shul and involved with Israel Bonds, where they were selected to host a dinner in their home for Yitzhak Rabin, and raised substantial funds for this important cause. From Great Neck, the Laufers moved to New York City, fulfilling the ultimate American dream, living in the City, in the Upper East Side’s Trump Plaza, where they joined the Fifth Avenue Synagogue and became involved with the Synagogue’s Sisterhood and Women’s Club. It was not long before Fran became the President of the Women’s Club. The Laufers became very close friends of the Synagogue’s Rabbi Dr. Sol Roth and Cantor Josef Malovany.

In addition to building and growing communities, in 1965 Fran founded the famous Rivkah Laufer Bikur Cholim in memory of her beloved cousin Rivkah Laufer. This wonderful organization is devoted to dispatching volunteers to hospitals to visit the sick and needy, offering social assistance, advice and companionship, kosher meals, and facilities to religiously observant people who could not travel long distances to visit ill family members. All of this required money, so Fran spearheaded an annual fundraiser to provide this medical and social assistance to those who could not afford it. That fundraiser grew from a garden party in her backyard to an annual event hosting more than 600 women at Terrace on the Park, in Flushing. This organization has no administrative overhead as all personnel are volunteers, and for over 50 years, 100 percent of the proceeds are allocated to this important tz’dakah. 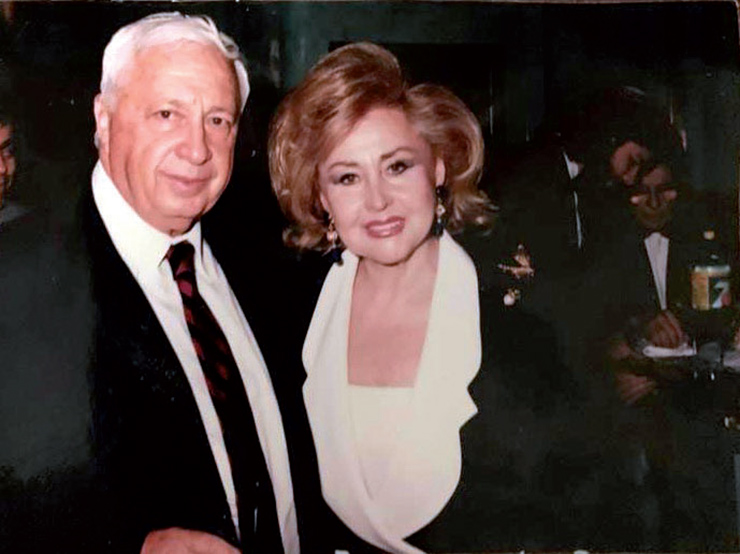 On the day that her parents were put on the train and taken from her forever, someone pressed a piece of fabric into her hand. It was torn from her mother’s dress and on it she had written in her own blood “Hide and Live!” Fran vowed to obey her mother’s wishes and has fulfilled this vow in every sense of the word. She has lived: She has built Jewish communities, endowed synagogues, namely the Young Israel of Hillcrest, the Young Israel of Deerfield Beach, Shaar Shimon of Bobov, the Rema’s shul in Krakow, and the Great Synagogue in Jerusalem; and she has made it her life’s mission to keep the lessons of the Holocaust alive in the world’s collective memory. She has spoken to thousands of audiences, comprised of both adults and children, who are equally captivated to hear her story of survival and triumph. She has given testimony to Spielberg and Yale University, and she has joined the legions of survivors whose collective testimony will ensure that this mantra of “Never Again” will endure. Fran narrated her personal story on a fascinating video for Torah Café, which is often screened on the Public Broadcasting System. Fran wrote her memoirs in a book she titled A Vow Fulfilled, to honor her dear mother’s directive to her to “Hide and Live.” Fran defined living by dedicating her life to helping and building klal Yisrael.

On August 22, 2019, Fran was reunited with her parents, brother, sister, and relatives, whom she yearned for and dreamed of since they were taken from her during the war. Her beloved Shimon was undoubtedly waiting for her at the gates of Shamayim to welcome her to her rightful place in the Olam HaEmes. There she will surely receive her ultimate most deserving reward for all of the great work and accomplishments that she gifted the world in her lifetime. 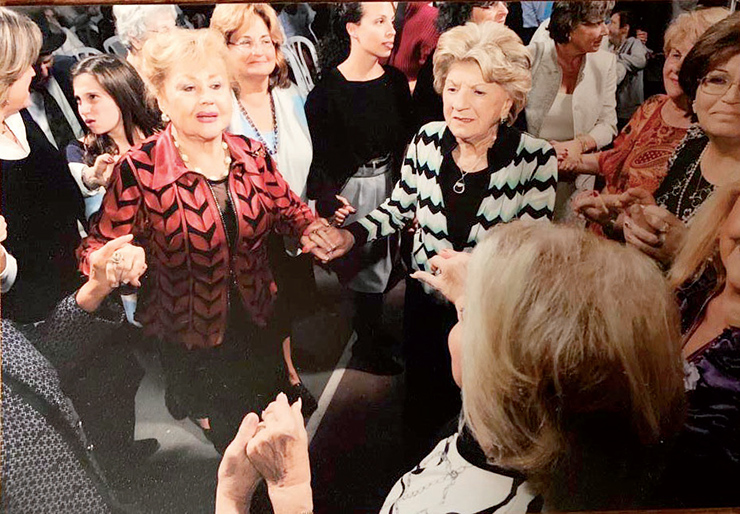