Whew! The marathon is over. What, you didn’t know there was a marathon? Well, we at Netzach Outreach felt like we were running one this past summer. The summer of 2019 was a whirlwind of activity and accomplishments for the Jewish public-school students of Queens, New York. Baruch Hashem, we feel that due to their hard work, the Queens community surely has significant merits to bring to the fore when Rosh HaShanah arrives – in less than two weeks.

Where should we start in describing the details? Well, let’s begin with what went on here on this side of the ocean. In Queens, New York, we ran the Summer Intensive Program out of five locations: Kew Gardens Hills, Fresh Meadows, Forest Hills, and two places in Jamaica Estates. For eight weeks, 150 public school boys and girls were spending their vacation time studying Torah, five days a week. The schedule was packed with davening and learning (and food and breaks) for three and a half hours each morning. At night, there were an additional 25 boys and girls learning from 7:00 to 8:00 for four nights a week. All in all, we chalked up 11,300 hours of Torah learning and davening! 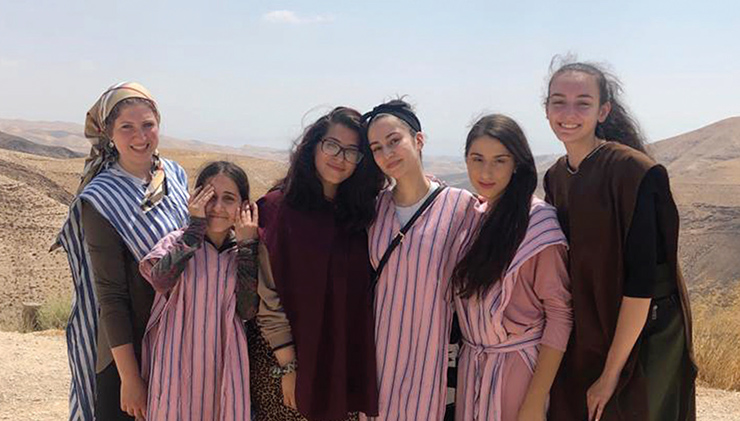 Pretty cool, but that’s the less exciting part of the story. This summer, something totally above and beyond went on. Namely, 13 of our Netzach boys and six of our Netzach girls (all public school students) went to learn through the summer in yeshivah in Eretz Yisrael! These 19 students are doing so well during the year with us that we decided to send them off for four to eight weeks to continue learning in the Holy Land, away from all the distractions of America. While there was indeed the huge summer initiative going on back in Queens, we felt that this group would benefit from something even huger – Eretz Yisrael. The boys spent the first half of every day learning in Yeshivas Birkas HaTorah. We spared a few rebbeim, and also arranged for some of the Yeshivas Birkas HaTorah staff to join in to guide the boys to flourish. The girls joined a similar program on the Neve campus. The outreach staff there expertly catered to their needs, providing each girl with the mentor she needed to grow on her level.

In the second half of each day, we took these teenagers on trips. Rather than being simply trips where they could have fun, these trips were meant to reach, teach, and inspire. The Kosel was obviously on our agenda, but we also went to a sofer to learn about how the Torah is made, we went to k’varim of g’dolim from our past, and we also went to g’dolim of our present generation!

Here are two excerpts from our summer newsletters. They describe two special stories, one from this side of the world, and one from Eretz Yisrael.

Ryan attends public school in Queens and attends Torah classes given by Netzach a few evenings a week. He started coming last year, although not really because he had any interest in the Torah. His friends told him about the monetary incentives they receive for attending and studying, so Ryan signed up. He even went so far as to tell the rebbe, “I’m not here to learn. I’m here to earn money.” The rebbe wisely chose not to argue. “That’s fine” he said. “So you’ll come and earn some money.”

But what do you think happened? “The light in the Torah brings them back.” Ryan sat through his money-making classes with all intentions to not absorb one word. But his rock-hard façade was slowly chipped away by the mighty jackhammer of Torah.

Fast forward a year later – to a week and a half ago. Ryan approaches his rebbe after a class where they learned about maaser – the mitzvah to give a tithe of one’s earnings for charity. The required amount is one-tenth, and the righteous give, if they can, one-fifth. “Rabbi,” Ryan began, “I want to start giving maaser.” Working to conceal his astonishment, the rebbe responded, “Oh, that’s wonderful!” Ryan agreed, and then added, “But I don’t want to give one-tenth.” “What do you mean?” his rebbe asked. Ryan explained, “I want to give one-fifth!”

The rebbe could no longer conceal his astonishment. “Aren’t you the same Ryan who told me a year ago that you’re only coming for the money?” Ryan smiled and calmly responded. “Nope, I’m not. I’ve grown and matured.” Putting his arm around his student’s shoulders, the rebbe proudly stated, “You’re on a higher spiritual level than I am! I only give a tenth!”

Rav Shteinman granted them over a half hour of his precious time. Through a translator, the boys peppered him with questions that exemplified their yearnings to become better Jews. One of the questions they asked him was as follows: “We know that all Jews have to do the same mitzvos. But don’t we know that each person has his own purpose? How is each person supposed to know his unique purpose in life?” Rav Shteinman patiently explained that Hashem grants each person drives and interests, and that each person finds that he is satisfied by different areas of work and growth. The Rav explained that it is in those areas that Hashem wants a person to focus his time and energy. The boys then went on to ask the Rav how studying Gemara all day – as boys do in a yeshivah – will make a person into a better human being. Once again, the Rav clearly and kindly explained that learning Torah is not just a work in acquiring knowledge. Rather, he said, it’s about finding k’dushah and connecting to HaKadosh Baruch Hu.

After the visit with Rav Shteinman, the boys went on to visit Rav Chaim. They first met and spoke briefly with the gabbai, who then let them in to the Rav himself. Rav Chaim’s schedule did not permit them to get more than a blessing for brachah and hatzlachah (no small potatoes!), but the impact it left on the boys was tremendous.

Ask yourself: How does an American teenager, a product of the public school system, come to feel this way? How does he come to feel that meeting with a gadol – for the time span in which he can receive an abbreviated blessing – is the holiest experience he could possibly have in Israel? The answer is simple. The Yiddishe neshamah is hewn from underneath G-d’s throne. It comes from a place of holiness, and it knows holiness when it sees it.

So now you got a glimpse of what went on in the Netzach summer program. It was definitely a marathon, but it was truly accomplishing, worth every penny, and definitely something to bring to the table when Rosh HaShanah arrives.

Shaya Winiarz is a student of the Rabbinical Seminary of America (Yeshiva Chofetz Chaim), as well as a mohel, lecturer, columnist, and freelance writer. He is also the author of Making a Difference: The Story of Reb Dovid Winiarz, Let There Be Time: The Meaning and Messages of the Jewish Months, and an upcoming sefer (39 Things You CAN Do on Shabbos). He can be reached for bris milah, speaking engagements, or freelance writing at This email address is being protected from spambots. You need JavaScript enabled to view it..