With the passing of over 70 years since the events of the Holocaust, the Jewish people are at a critical juncture in their history. The events of the Holocaust are close enough that we can speak to witnesses and survivors and hear stories of horror, hope, and liberation, yet they are far enough that it is challenging for today’s generation to truly comprehend its magnitude. With tremendous foresight, Yad Vashem was established in 1952 with the goals of educating the world about the Holocaust and mining through history to create a comprehensive understanding of the world during the 1930s and 1940s. Perhaps the most important part of Yad Vashem’s mission can be explained in one word: education. 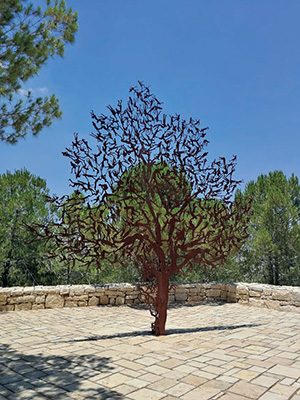 Yad Vashem’s mission has made a forceful impact in the world. The institution collects artifacts, testimonies, pictures, and documents at an impressive rate and has storage rooms filled with thousands of pieces of history. They share their historical wealth with the public in their Holocaust museum, art museum, and photography museum. They have spent decades videoing and documenting survivors, as well as searching for anyone with a connection to the Holocaust. Their campus is a touching source of comfort with beautiful monuments and exhibits, as well as a source of knowledge with their extensive archives and research libraries.

In addition to these efforts, Yad Vashem runs seminars on a continuous basis for people from all over the world. The organization also has a vast amount of online resources that are easy to access and free to the public. This summer, they hosted a conference specifically targeted to Jewish day school educators, with the goal of teaching educators how to teach the events of the Holocaust with sensitivity and accuracy.

The two-week seminar started on July 2 and attracted educators from all over the world. Educators traveled from all parts of the US, as well as Canada and Panama. These 33 educators were classroom teachers, administrators, and community leaders of all different ages and experiences. They came together with the goal of learning about the Holocaust, increasing pedagogical understanding, and refining their teaching in the area of Holocaust education.

The area of Holocaust education has been a challenging one, as it elicits a strongly emotional reaction that makes it difficult to separate fact from our personal and heightened feelings. At the same time, we recognize the importance of teaching about and learning from the events of the Holocaust. At the opening ceremony of the Holocaust History Museum at Yad Vashem on March 15, 2005, Elie Wiesel said, “All we know is that it happened. [...] what should we do? Weep? No! We never try to tell the tale to make people weep. It is too easy. We did not want pity. If we decided to tell the tale, it is because we wanted the world to be a better world – just a better world – and learn and remember.” Yad Vashem has established learning and education at the forefront of its mission, and has developed a clear pedagogical approach to Holocaust education in order to create “a better world and learn and remember.”

Part of Yad Vashem’s policy in regards to Holocaust education is to honor the victims, remember the heroes, and create a legacy of learning and hope. They have spent years improving their pedagogical approach and are always willing to refine and improve their techniques. In introducing their approach, they also implemented it in our own classroom learning. The approach will be outlined below with a clear explanation and how it was embedded into our own learning experience.

The Jewish Victim – Who were the Jews during this time? What was their life like? What did they care about? What did they believe politically and religiously?

The Bystander – How do we reconcile our understanding of human nature with the people who stood by and watched the Holocaust? For example, a diary was found, written by the conductor who drove the trains to the concentration camps. What role did he play in the larger picture of the Holocaust?

The Perpetrator – We have a perception of Nazis as monsters and refer to Nazis as “them.” However, they were also human beings; how did human beings progress to the point of mass murder?

Age-Appropriate – Children are developmentally ready for knowledge in stages. Having a clear understanding of a child’s emotional and cognitive ability is what leads educators in their approach to the topic in the classroom.

Inter-Disciplinary – Children have different interests and learning styles. The Holocaust is not a history lesson; it is a story of people that can be approached through art, poetry, writing, artifacts, song, and story-telling. 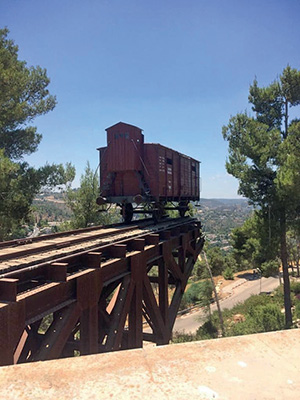 The Role of the Educator – The most important element of the Holocaust in the classroom is the educator. The educator is the facilitator of the conversation and reads the responsivity and readiness of the students.

The seminar’s agenda was developed in a manner that followed the six-point approach, and we were immersed in this methodology throughout the course. We began with an in-depth view of the Jews of Pre-War Europe by Ephraim Kaye, Director of International Seminars, and were given an interactive approach to learning about the Jewish world using art, role-play, imagery, and collaboration. We were given a sample of the rich political, religious, and cultural life that the Jews of Europe lived. We were then given a thorough history of anti-Semitism, as well as the specific brand of Nazi anti-Semitism. Nazi anti-Semitism was specialized in that it was based on race ideology. Most traditional anti-Semitism was based on religious and often superstitious beliefs; modern anti-Semitism introduced the concept of equality, based on the ideas of equality that fueled the French and American Revolutions and consequently made Jews an inner part of society. However, Nazi anti-Semitism introduced elements of both: It played on the fears of the superstitious and the rationality of science and race philosophy.

We learned about the development of the plan that we now know as the Final Solution and the people who resisted the Nazi horrors in a myriad of small and big rebellions. We were brought to a British DP camp that made us come to the shocking realization that survival did not necessarily bring about a happy ending. Survivors had to confront a variety of practical, emotional, and physical issues in order to start rebuilding their lives. And finally, we learned about the tremendous strength and grace with which people went on living life after living death. We were introduced to three amazing survivors whose stories were so different and paths after the war sharply veered away from each other in both lifestyles and philosophies. However, the most important thing we learned was to be ambassadors and messengers for them.

Throughout the seminar, we were introduced to tremendous amounts of mediums. We learned about the Oneg Shabbos archives that provided a rich source of information about life in the ghetto. We read poetry and studied diaries, drawings, and photographs that were drawn, written, and created by people who lived during this time. We studied the art of artists like Felix Nussbaum, whose famous painting The Refugee portrays the feelings of utter loss and hopelessness people felt when they were forced to leave their countries and had no homeland. We learned about “Fierce Females” from Sheryl Ochayon, Project Director of Echoes and Reflections, who gave us wonderful insight into female resistance fighters and spies who helped. We learned the story of the Warsaw Ghetto Uprising, a dramatic affair that ended in death for so many rebels but brought hope to so many Jews.

Each experience was carefully tailored to expand our knowledge as well as provide anchors and emotional connections to the events of the Holocaust. While some days were intensely hard with the type of knowledge and the depth of feeling, we always had a safe place to reflect and some more light-hearted activities to help balance out our feelings and responses. In this way, our own educators made sure to provide appropriate education, promote deep thought, give us emotional anchors, and facilitate important conversations.

After experiencing such a wonderfully thought-out and sensitive seminar using this approach, the idea of using this methodology in the classroom is both inspiring and overwhelming. However, the amazing part is that there is a tremendous community of teachers and educators who understand the urgency and importance of this type of education.

Why is Holocaust Education so Important?

As an educator, I believe in the power of children. Children are our past, present, and future. This philosophy is deeply embedded within our religious life, with hundreds of ways to encourage children to ask, think, learn, and love their Yiddishkeit. As parents, we are given the soul-searching responsibility to raise our children to be reflections of the inherent values of the Torah. However, at the same time, the story of the Holocaust is the antithesis of everything we hold sacred and dear. It seems shocking to teach this cruel and unbelievable story to children: How can we make them feel safe and trusting when there is such evil in the world? Why introduce this dark element into their lives when it happened so long ago and could never again? Parents and educators seek to protect, and these reactions are normal for any parent or educator. But to understand the importance, we need to think deeply about the type of people we want our children to be.

From a young age, children are taught the Golden Rule: Treat others as you would like to be treated. The entire Torah was paraphrased with this maxim by Hillel, and is something we repeat to our children when they are having a fight with a sibling or are upset with a friend. We teach them that sometimes, as human beings, we need to step outside of ourselves and treat others with compassion and empathy, especially when it is hard for us. As children get older, they learn more difficult concepts and encounter issues of morality and ethics, and we hope that they continue to apply the Golden Rule to every aspect of their lives.

The story of the Holocaust is a story of the Golden Rule. People had to make life-altering decisions in the midst of a group of people with their own political, racist, and cruel agendas. We can focus on the evil, but we can also focus on the unbelievable acts of strength and kindness people committed. People risked their lives and sacrificed themselves for loved ones – especially for the children.

Mothers and fathers did everything within their power to make sure their children lived; older siblings sacrificed for younger siblings, and strangers protected children they never knew before. Why would adults want children to live in such a world? Because their children were the epitome of hope and kindness in an otherwise cruel world. Their children had been taught the fundamental values of humanity and would be able to reintroduce this humanity into the world long after the Nazis lost their power.

Children are entrusted with the ultimate power of standing up and fighting for what is right in the world. During the days of the ghettos, they were lovingly referred to as “tiny warriors” because of their active role in resisting Nazi infiltration. Children maintained their hope and humanity, and we can see this in their writings, drawings, poems, and stories. There are beautiful drawings created by children living in squalor; children refused to give up what was important to them and sought to recreate their fundamental values and truths.

In telling the story of the Holocaust, we empower our children and give honor to the countless parents who trusted their children to continue our unbelievable legacy. As parents, educators, grandparents, aunts, and uncles, we need our children to know that our humanity lives and breathes in the hands of these “tiny warriors.”