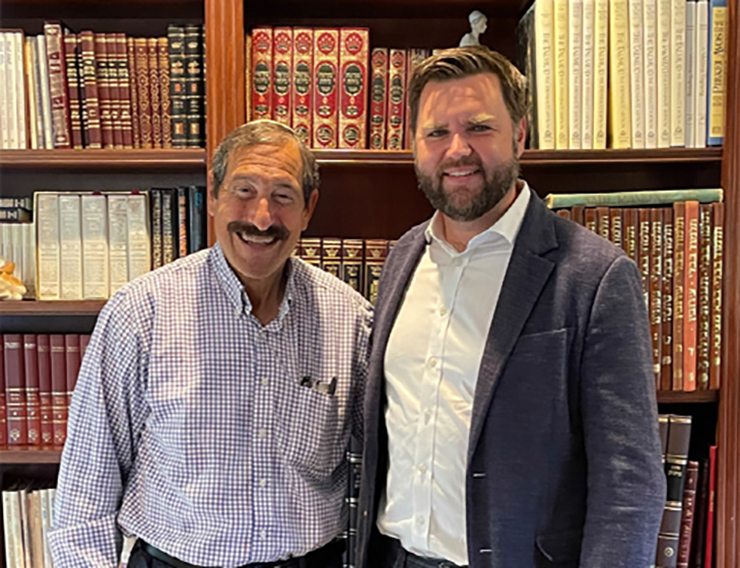 Robert Portman was the Republican senator from Ohio for the past 11 years. He was a reliable and accomplished Senator and a great friend of Israel. As an example of his support of Israel on May 14, 2021, in the middle of Israel’s latest war against Hamas he issued the following statement. “The almost 2000 Hamas rocket attacks on Israel from Gaza violate the international law of armed conflict and must be roundly condemned by the United States and the rest of the international community. In response to these attacks Israel has the right to defend itself. There is no equivalence between the deadly indiscriminate rocket attacks by Hamas and the defensive actions taken by the government of Israel.”

This is just one of the many ways Senator Portman helped Israel and the American-Israel Alliance.

After a difficult primary that saw $80 million dollars spent and my friend Josh Mandel defeated, Senator Portman’s heir was chosen. JD Vance emerged the victor and I believe he will be every bit as strong a defender of Israel as his predecessor. At 38 years old, he has a bright future. His endorsement by former President Trump assured his primary victory.

Getting to know Vance, one realizes he is a towering figure in his own right. I had a chance to meet him, courtesy of Dr. Ben Choake and NORPAC. I have to thank Stanley and Trudy Stern for hosting him.

JD Vance is the “real McCoy” in every sense. He grew up in a broken and impoverished home in Appalachia, moved to Middletown, Ohio, then made his way to Ohio State University and eventually to Yale Law School. In his bestseller Hillbilly Elegy: A Memoir of a Family and Culture in Crisis, which was later made into a movie by Ron Howard, he describes the struggles encountered in Appalachia. His poor and difficult upbringing has only made him stronger and more courageous. He served as a Marine in Iraq from 2003 to 2007.

Although he grew up an Evangelical Christian, he recently became a Catholic. He said that Catholicism borrowed many practices from Judaism and gave him a better understanding and appreciation for the Jewish Religion.

Although always a fervent supporter of Israel, Vance said that his views and advocacy really crystallized on a recent trip to Israel sponsored by CPAC. He said he went from an “intellectual” attachment to an “emotional” one when he saw firsthand the Land of Israel. When asked about the view of Israel from Appalachia, he said that one of the reasons Israel gains the support of those he grew up with is the fact that Israel has a strong army and is not afraid to fight if it has to.

While in Israel, Vance said, “I will be as strong an advocate for the US-Israel relationship as anyone.” It is “an expression of deeper things, of cultural affinity, and a shared heritage and values.” He further said, “The Iran Deal was a disaster, Israel is our most important ally and [former President Donald] Trump was right to move the [Embassy] to Jerusalem.”

America has a great future with its new face: JD Vance.