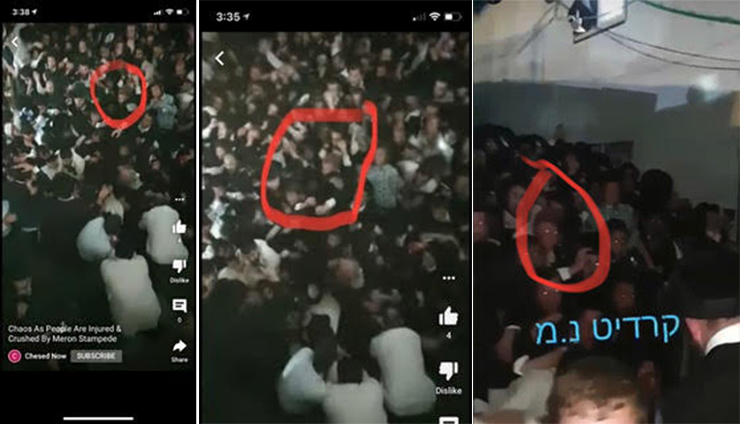 It’s every parent’s nightmare to get a text message where you know immediately that something is wrong. When we received a voice note from my son from an unknown number, we right away got a bad feeling.

Ben and some friends had gone to Meron for Lag BaOmer. We were getting videos from Ben all day saying how “insanely amazing Meron was” – how beautiful and spiritual the whole atmosphere was. Our hearts were full. Ben was having the time of his life – an experience he would always remember.

I assumed he was fine and exaggerating a little. He texted and asked me to call his friend Zev’s mom and tell her they were okay.

By 7 p.m., the news was everywhere about Meron. We were still getting voice messages from this unknown number. “There’s no service, there was a terrible stampede. I was basically at the bottom of the pile. I don’t know how I got out. People are dead, lots of them.” His text messages were taking forever to come and not making much sense.

“We were trying to exit and couldn’t because it became a stampede. I don’t want to talk about it right now. I’m fine. I don’t know how, but I’m going, because I have to sit in a different room, just don’t worry I’m fine.”

When I finally got Ben on the phone, he was crying hysterically; he kept insisting there were dead bodies and I tried to reassure him that he couldn’t know that –people may have just been injured badly. But he responded, “Mom, they were on me. I know when someone is dead. They were dead.”

The boys were now in a Hatzalah tent. They wanted them to go to the hospital to be checked out for internal bleeding or broken bones, but the boys were a mess emotionally. We found out that the other boys they had been with had left earlier and were safe.

Ben began to tell us what happened. Immediately after escaping the stampede, they had to pull each other out of a pile of unconscious people. They were then able to escape into a room that had just opened up. Ben was the first person in there and was receiving medical attention; but over the next couple of minutes, others kept getting brought into this room and medics were constantly trying to resuscitate them. Five minutes later, eight people were pronounced dead as Ben sat there trying to regain his breath and strength. He was the only person in that room who had not passed away or needed a medic. Zev had escaped a different way and found him sitting in this room and immediately told him he had to leave that room.

The news was now out that Donny Morris z”l – a Shaalvim student – was missing, and that hit Ben and Zev incredibly hard, knowing they had been in the same place as Donny just a little while earlier.

Ben then told me then that he got out of the crowd because he was following some huge guy. He said, “The guy was a hero, Mom; we have to find him. He was huge and he was like a linebacker, and he just kept helping people over and over; he kicked down a railing to make room for people and he was lifting kids up and passing them.” The crowd was so dense and thick that if you were short, you wouldn’t have air to breathe. Ben said there were three kids he was helping, and he kept saying one of them was a 13-year-old and he was sure he didn’t make it. I told him there was no way to know that and to hope for the best. I said you made it out so let’s wait and see. The 13-year-old boy Ben was describing was Azi Koltai z”l.

At this point, T’hilim groups had been started for Donny Morris z”l. It was so distressing to know these parents hadn’t heard from their son in at least ten hours.

It was now 4 a.m. in Israel and there was a tremendous difficulty getting thousands of people off the mountain. Shuttle buses were taking small groups down to bigger buses, but it was a very slow process. Ben and Zev were exhausted mentally, physically, and in shock. They found a group from Mevasseret and asked to stay with them. They finally arrived back in Jerusalem around 1:45 p.m. – 19 hours after that first text message to us.

We were in shock and couldn’t fully understand what had transpired. Ben explained that the police started to close entrances as too many people were coming in and they wanted to stop more from coming. There were only two exits, and as people were leaving, they were pushed forward by the mob who just kept coming from behind but had no way of knowing that at some point, while the crowd was trying to get out, people had started falling, water was being thrown from above, and people were slipping. The people behind kept coming and compacting the people at the front who couldn’t get out because there was now a buildup of bodies piled up blocking the exits. The force from behind with nowhere for the people up front to go, and the crowd just getting denser, was what caused the people to start panicking and pushing and stampeding. They couldn’t see that the front was blocked, and at this point, no one was getting out.

Friday morning, we heard that Donny hadn’t survived, and Ben and Zev lost it. The survivor’s guilt was just too much for our boys and for us as parents. The boys kept asking, “Why Donny?” Why not them?

Saturday night there was a kumsitz for Donny, and Ben said he was afraid to go. He had been medicated all Shabbos and only woke up to bentch Gomel, but he felt he had to be there. He sat off to the side, and as soon as he saw his best friend from Florida, he lost it. They cried and held each other throughout the whole service.

Zev and Ben told us that they kept each other alive. The boys couldn’t move or breathe normally. Ben had lost complete feeling in his body and couldn’t even move his fingers. They were pinned between people horizontally. The men in the crowd were screaming “we are dying,” and people were throwing water bottles from above. A water bottle landed on Zev’s shoulder, and he was able to grab it and pour water into Ben’s mouth. Ben said that water was what kept him energized, as before that, he had told Zev, “I’m too tired; I can’t breathe much longer.” He said he wanted to give up and couldn’t fight to breathe anymore. The bond Zev and Ben have from that night is inseparable.

By Monday, there were rumors that the police had stopped people from leaving and weren’t helping. Ben got very defensive when he heard that. He asked a person, “Were you there?” She replied, “No, but I had a birds-eye view and know the police were to blame.” Ben said he saw police tearing down metal barriers with their own hands, doing everything in their power, trying to pull people out and help anyone they could.

For me, Lag BaOmer was always a day where people started to celebrate again. I will always look at Lag BaOmer now as a day of thanks. If I could bentch Gomel every year I would. We made a kiddush hodaah last year and may continue that tradition yearly. It breaks my heart that on what used to be such a joyous, fun day, so many people will be saying Kaddish and lighting a yahrzeit candle. I still get a sick feeling when I think how different that night could have turned out for us, and I am truly grateful to Hashem and the Israeli police who did everything to get Ben and Zev out safely.