In an era where President Trump is constantly accused of his rhetoric endangering the lives of millions of people without any evidence, the left is mysteriously silent about what is happening in New York City. Mayor Bill de Blasio has repeatedly spewed anti-police rhetoric, and a new generation of video-taking teenagers are trying to make a name for themselves by essentially daring the police to arrest or shoot them by pouring water on patrolling officers. This pattern of disrespect leads all the way back to the top.

It’s not a coincidence that this began after de Blasio’s performance at June’s Presidential Debate. De Blasio, who is polling at the bottom of the pack at less than one percent, said, “There is something that sets me apart from all of my colleagues running in this race, and that is: For the last 21 years, I have been raising a black son in America. And I have had to have very, very serious talks with my son Dante, about how to protect himself in the streets of our city and all over our country, including how to deal with the fact that he has to take special caution, because there have been too many tragedies between our young men and our police, too.” 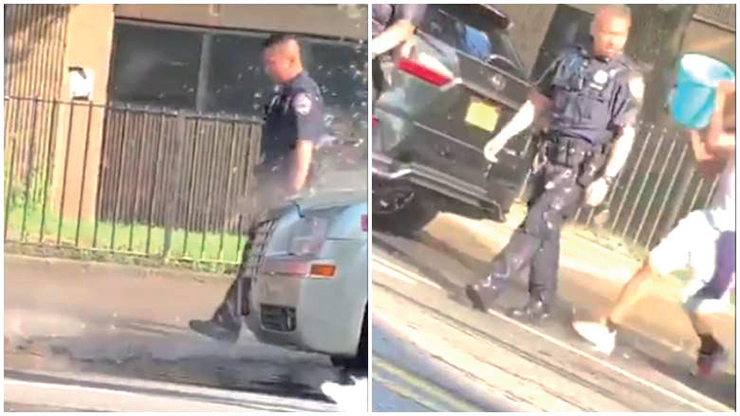 Shortly after this, 21-year-old Yale graduate Dante de Blasio wrote an op-ed for USA Today entitled, “My Dad Gave Me ‘The Talk.’ When Someone Called Police, I Felt The Fear.” In this column, he chronicled an incident where he didn’t feel fear when he was walking through a high-crime-ridden area of San Francisco, but did feel fear when he was trying to get into a building at 1 a.m. in an “affluent” part of town that same night. “I had been standing outside the apartment for about ten minutes when a police cruiser slowly rolled down the empty block,” he writes. “I figured it must be heading somewhere else, but no, it pulled over right in front of me. For years, I had been aware of the fear I caused as a young black man – I had seen people cross the street to avoid me, I had been followed around stores – yet I could still hardly believe someone thought that I was trying to break into a home. But the truth was obvious: Somebody had called the police on me.”

So at 1 a.m., a young man who doesn’t live in the neighborhood attempts to get into a building, unsuccessfully, for ten minutes, and a police cruiser stopping on the street is a prime example of racism? The police officers didn’t get out of the car, Dante clearly states that he “frantically, and correctly, typed in the door code so fast that the cops didn’t even have a chance to step out of the car to question me.” This is the story that Dante de Blasio pulls as an example of racist police officers, in arguably the most left-wing city in the country, San Francisco.

It is not Dante de Blasio’s fault or the police’s fault that he lives in fear of law enforcement. The fault belongs to his father, who should teach his son that he has nothing to fear from the police if he acts respectfully towards them in interactions. The incident he described actually proves that. The San Francisco officers didn’t barrel down the street and start shooting. They calmly eased by and gave the person they saw attempting to get into a building an opportunity to punch in the code and enter. Nonetheless, Dante ends his op-ed with: “That fear I felt is not unique. That lecture I got from my father and cousins has been given to countless young black people. We’re taught to fear the people meant to protect us, because the absolute worst-case scenario has happened too many times. This reality cannot continue. We shouldn’t need to feel that fear.”

Black teenagers from Brooklyn and Harlem are not feeling the fear of being shot by the police. If they were, they wouldn’t video themselves throwing buckets of water (and the bucket itself) at police officers. They wouldn’t shout obscenities and disrespect law enforcement in that manner. They know that the Mayor of New York hates the police as much as they do. This is why hundreds of NYPD officers turned their backs on Mayor de Blasio when he gave a speech at an officer’s funeral back in 2017. This is why PBA President Patrick Lynch said in a statement: “Our anti-cop lawmakers have gotten their wish: The NYPD is now frozen. It’s not the fault of these police officers. It’s the end result of the torrent of bad policies and anti-police rhetoric that has been streaming out of City Hall and Albany for years now... Disorder controls the streets, and our elected leaders refuse to allow us to take them back.” This is why former Mayor Rudy Giuliani tweeted: “This disrespect for the uniform in NYC is the result of a Democrat-Progressive (Retrogressive)-Socialist Mayor. This is what happens with knee-jerk disrespect for police. It will only get worse until these Left-wing idiots are defeated.” 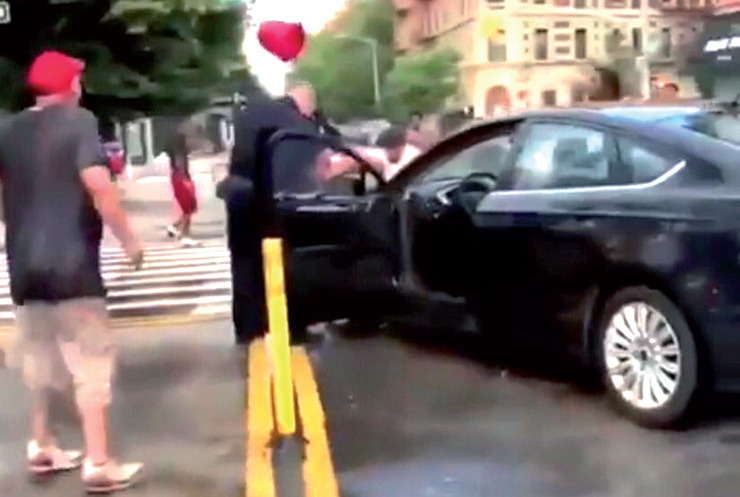 Disrespecting police officers will not yield a better relationship between the police and those whom they protect. That disrespect is not limited to the Mayor’s office. The Queens DA Democratic primary race, which is still pending lawsuits, features two candidates who vow to decriminalize many offenses. Decriminalizing an offense does not mean people won’t get arrested. They will, because the law is still the law, and the police are the enforcement mechanism of the law. It means that after the arrest, the prosecutors will refuse to do their jobs. This will only embolden criminals who are arrested and then immediately released, that the police have no power. This will increase the disrespect, increase the crime rate, and increase the likelihood of a fatal interaction between the police and (statistically) a young black man.

The problem with de Blasio’s anti-police stance is that he can’t see more than two feet in front of his nose. If he could, he would know that increased police presence saves black lives. Giuliani pushed for stronger law enforcement; he estimated that 6,000 black lives were saved by the end of his tenure. NYC murders dropped from 2245 in 1990 to 289 in 2018. It’s not wealthy white liberals who are getting gunned down in the streets; it’s poor black kids. Police officers save lives. That should be the message that de Blasio tells his black son, and a message that everyone around the country should hear. Want a good relationship with the police? Show them respect.