Elul has begun its path of t’shuvah (repentance), but it’s really a path to perfection. A month to reshape, remold, and reassess yourself in order to present your optimum state to Hashem at the head of the year, Rosh HaShanah. Would it not be helpful if there were mentors to guide you on your trip, female examples of the embodiment of what you wish to achieve?

There is a beautiful coffee table book in my living room titled Jewish Women, A World of Tradition and Change by photojournalist Joan Roth. In the preface, written by Shoshana Cardin, she opens with a quote from Mark Twain. The quote is: “All things are mortal but the Jew, all other forces pass, but a Jew remains. What is the secret of his immortality?” Joan’s book answered the question with addressing Jewish women, whose lives instruct, reflect, and transmit Judaism through beauty, ritual, and adaptation while nurturing the future firmly steeped in the past.

There are certain women whom you meet in life that make an everlasting impression. You might even refer to them as iconic, perfect profiles for personal mentors or subjects of a book. Fran Laufer z”l was most definitely one of those figures. She encompassed all the best characteristics of a Jewish woman, or in Yiddish terms: “ala mailos.” She was, as Katy Perry sings, “cause baby, you’re a firework, come on, show ’em what you’re worth.”

I first encountered her when I was honored at her annual Bikur Cholim luncheon in 2007 – a charitable foundation she started in 1965 in honor of her relative Rivka Laufer. She called me to review the protocol involving proper dress, speech review, and table seating. I must admit that I was totally intimidated by her fierce female force. She was definite, precise, exact, and clear with her instructions. I promised that I would behave accordingly and not disappoint her. After all, it was a great honor to be chosen by her. I scoured the stores to come up with just the right suit that sent the message she wanted for her event. Thank G-d, my orange and white brocade Carolina Herrera ensemble met with her approval as was my d’var Torah and guest list selection. When she approached me afterwards with a great and generous hug, I knew that this woman was as genuine as she was fabulous.

Throughout the years, I’ve had the privilege to hear her speak passionately about her personal journey from the depths of the Holocaust to accomplished businesswoman and extraordinary philanthropist. You can read her book or count the numerous dedication plaques from The Great Synagogue in Jerusalem to institutions and yeshivos in Queens.

If she was walking the runway at a fashion event for the Young Israel of Deerfield Beach, or giving a lecture for Torah Cafe, she didn’t miss a step. Meeting her in the gym at a Passover program involved exchanging weightlifting routines as well as a lecture on calorie intake. She was always perfectly put together in any and every situation, well into the years that most would just give up! Quite remarkable, since sometimes I could barely match my sneakers with my t-shirt. Our last phone conversation, about five months ago, was mostly about the latest facial cream that her dermatologist gave her. It supposedly makes her look 20 years younger. Believing her was never an issue, as she was more accurate that a beauty magazine.

Yet, the most touching thing she did, I never really shared with anyone. Upon my last divorce, she called me regularly with chizuk and solid advice – always ending the conversation with telling me how beautiful she thought I was. She never had to do any of it, yet I appreciated every attempt to make me feel whole again as I recovered from that particular public disaster.

She was bold, beautiful, and empowering, and that’s a combination that’s quite rare. She wasn’t an Instagram influencer with thousands of followers or a social media sensation. She was so, so, so much bigger than that. 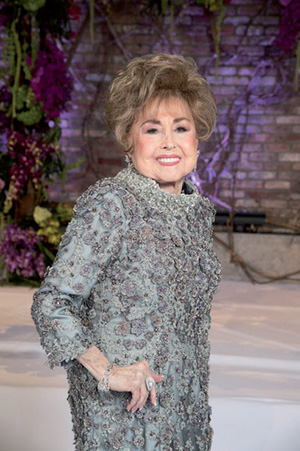 Although you may believe that the description of her is too gashmiyus, or frivolous, she would think otherwise! In a world of disappearing images of Jewish women from media, and shrinking voices in leadership, Fran was a fierce warrior of the complete opposite orientation. She was the perfect image of what an eishes chayil meant in both exterior and interior. Of a generation that produced a Rebbetzin Esther Jungreis and Estée Lauder, she had her prominent position. These were magnificent phoenixes that rose from the ashes of the World War II Holocaust era to soar and blaze a trail for Jewish women everywhere with their brains, beauty, and style without any trace of fading into the background of life.

We have a lot to learn from little Frimit of Chrzanow, Poland, who grew into Fran Laufer, the Jewish icon.