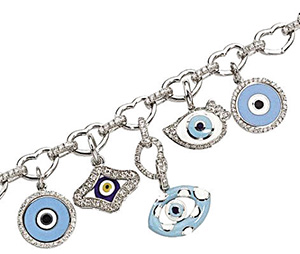 I also had a very superstitious grandmother who used spitting (three times) to ward away any suspicions of the harmful eye. Yes, as a little girl I found the behavior a bit frightening. Every greeting came with a hug, a kiss, and then a spit. My great-grandmother had issues with black jewelry and baths after Shabbos. I have no idea where that came from!

What are the origins of this jewelry trend? Does the Torah mention anything about evil eyes and red strings, eyes of newts, black caldrons, or spitting?

In several pieces of Midrash, rabbis suggest that the evil eye played a role in various incidents in the Torah. For example, Sarah cast an evil eye on Hagar while Hagar was pregnant, causing her to miscarry before becoming pregnant with Ishmael. Elsewhere, rabbis argue that Leah’s fertility was adversely impacted when she “became subject to the power of the evil eye” for thanking G-d for allowing her to bear more than a fourth of Jacob’s sons (Rabbeinu Bachya, Bereishis 30:38:5). 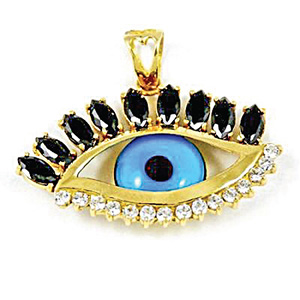 In the Talmud, rabbis say that Joseph’s descendants are immune to the power of the evil eye — and that:

In Mishnah Berurah, Jews are urged to perform the Rosh HaShanah tashlich ritual in a body of water that contains fish for the reason of “fish are incapable of being affected by the evil eye.”

As mentioned in an article from Torah.org by David Twersky:

“The Chidah believes that a person with humility can escape the evil eye. Someone who is humble does not prance around and try to attract attention to himself. It is specifically such attention-grabbing actions that attract the evil eye. The Chidah points out that the Hebrew word anavah (ayin, nun, vav, hei) has the same numeric value as ayin (ayin, yud, nun) plus one, indicating that anavah (modesty) transcends the (evil) “ayin” (eye). The Gematria of ayin is 120; that of anavah is 121. Thus, the Chidah says that one with anivus “is above” the (evil) eye”!

I didn’t even know that the red string theory is to be used after you encircle the kever of Rachel with it, and then use a piece of it as a personal bracelet. I was also unaware of an entire book dedicated to all aspects or renditions of ayin hara, intentionally or unintentionally, either fueled by jealousy or amazement (Sefer Ayin Hara by R’ Moshe Yagudyov). 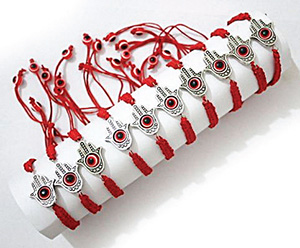 There are countless segulos discussed in the sefarim, and it is beyond the scope of this article to cite all of them. Ranging from a pregnant woman wearing the “even tekumah,” a type of ruby, to prevent her from miscarrying her unborn child, to direct prayers to Rav Meir Bal Haness.

It is important to understand that segulos of every variety work very similar to all other human endeavors, in that ultimately everything is up to Hashem. Even when you make the effort to utilize segulos, this is just a tangible vehicle for Hashem’s will to be fulfilled. If Hashem does not warrant something to happen, all the segulos in the world will not help. If Hashem does want something to happen, he sends us the means to come to fruition, which is not necessarily in the form of a segulah.

So, if your red string fell off in the shower, or your evil eye necklace that was a gift from your aunt in Tzfat suddenly broke… or if Lorraine Schwartz sold you a diamond eye bracelet (lucky you!), don’t have an anxiety attack over their power of protection over you. In all fairness, these pieces of jewelry probably attract more attention than they ever intended to, almost achieving a reverse reaction. The only true protection we have is G-d Himself, but a few “keineina haras” and a couple of “pooh poohs” couldn’t hurt!