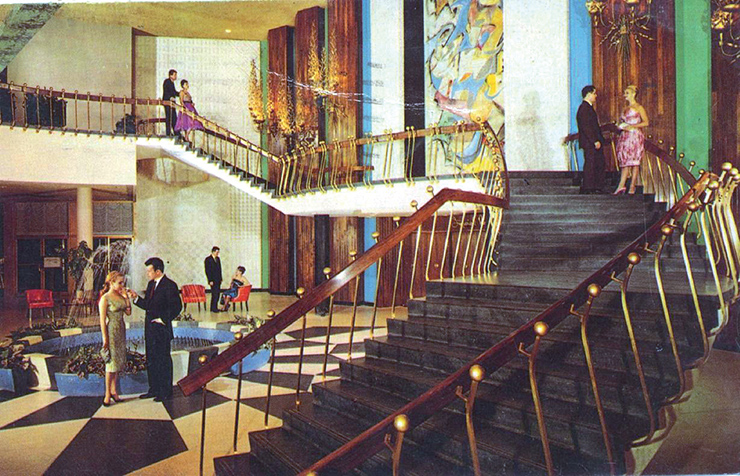 The resort was known for its impressive entertainment venues. The Imperial Room seated 3,000 in a nearly circular space, perhaps the largest in the Catskills, and a popular venue for an A-plus list of entertainers. Buddy Hackett was a frequently featured performer, as were Tony Bennett, Milton Berle, Tony Martin, Barbra Streisand, and Judy Garland. Martin Luther King received an award at the Concord in 1963 from the Rabbinical Assembly, which was an historic event. In the book “It Happened in the Catskills: An Oral History in the Words of Busboys, Bellhops, Guests, Proprietors, Comedians, Agents, and Others Who Lived It,” Robert Towers wrote: “Streisand came up on a Friday night before she made Funny Girl. The William Morris Agency said, ‘Look, you’re getting her for $500. Later on you won’t be able to buy her for anything.’ She came up – a little girl in a gunnysack dress with a big voice. She tore the place apart.”

The musical directors were prominent Yiddish musicians. The first one was Alexander Olshanetsky, whose original shows played in every theater on Second Avenue, also known as “The Broadway of Yiddish Theatre.” Some of the most sophisticated cantors or chazanim of the time considered him one of the best choirmasters.

So popular and successful were events at the Concord that they were able to secure the participation of the singer who made the transition from chazan to opera singer, Richard Tucker. He then became one of the 20th century’s greatest tenors. He performed at the Passover Seder, which was an annual “sold out” holiday for the Concord Hotel.

The food was more “cuisine” than other kosher resorts. The choices were fewer but had more sophisticated names such as “consommé” for chicken soup and filet mignon (although that cut is not kosher) for fillet of beef. However, if you tipped your waiter generously before your vacation began, you were privy to all the extra dishes that were not listed on the menu.

Your vacation was complete only after you picked up your colored monogrammed picture tubes. I have a collection of them from over the years as I’m sure most guests do. I remember every outfit I wore: the white leather dress for Shavuos 1979 (wish I still had it) and the big Laura Biagiotti sunglasses from 1982 or summer of 1980 Comme des Garçons ensemble.

The signature floating staircase design in the rotunda was designed to give guests an opportunity to make a grand entrance. The long lobby that led to the dining room was a runway of shidduch opportunities better than any profile or resume photo could accomplish today. As I wrote before, the diverse and active social life resulted in numerous marriage proposals. 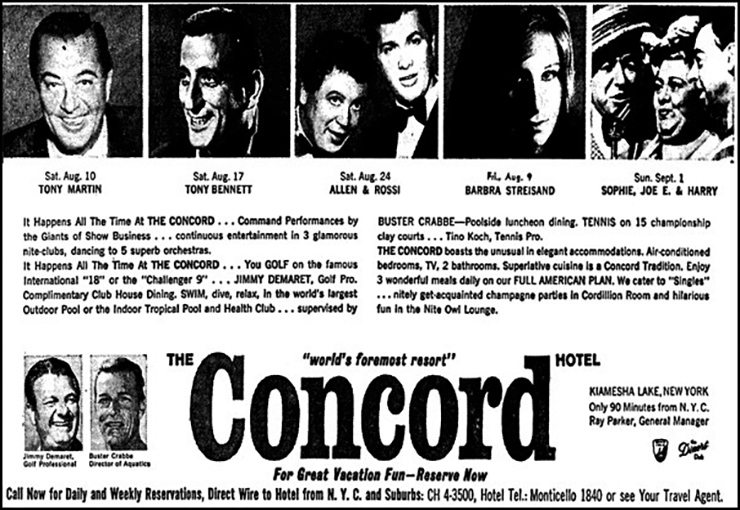 Today, the Concord has been reborn into a different kind of hotel. No longer the kosher luxury vacation resort, it’s now a Vegas-style casino complete with hotel and spa facilities. Resorts World Catskills Casino Resort is an 18-story, all-suite luxury hotel and casino with construction costs of $1.2 billion. The hotel features 332 suites, including 27 premium accommodations consisting of garden suites, penthouse suites, and two-story villas that have their own private plunge pools. The 2,500-seat RW Epicenter has hosted famous acts such as Jerry Seinfeld. Guests can pamper themselves at the feng shui-inspired Crystal Life Spa, made famous on Crystal Cruises. The 8,000-square-foot full-service spa features six treatment rooms and a wide array of Eastern and Western treatments including massages, facials, and body treatments. Guests can also enjoy manicures, pedicures, hair treatments, and eyebrow shaping at the salon, and they can find their own oasis in the relaxation lounge.

Sadly, there are no kosher restaurants or dining possibilities available, unless you pack your own grub.

I don’t know about you, but I’d rather have a lively “leibedik” conversation at the outdoor pool during Shabbos Nachamu than a mummified detox body wrap… but I’m just old-school!