“The city of Teveriah has never seen such a powerful, overt demonstration of the importance of Torah. The crowd was massive, and it was clear that residents of Teveriah who care about Yiddishkeit were deeply moved. To see two octogenarian, leading Gedolim, the Ashkenazi Gaon, HaRav Baruch Mordechai Ezrachi, shlita, Rosh Yeshiva of Yeshiva Ateres Yisrael, and the Sefardi Gaon, HaRav Shimon Baadani, shlita, Rosh Yeshiva of Yeshiva Torah V’Chaim coupled with the Chassidishe Gedolim, the sons of the Sanz-Klausenberger Rebbe and the Stolin-Karliner Rebbe who all troubled themselves to travel to Teveriah and give messages of chizuk to the city’s inhabitants was the greatest demonstration of achdus and kevod haTorah that the city has seen in a long time!”

Those were the words of Reb David Ohana, a member of the City Council of Teveria for Degel HaTorah,

What happened in Teveriah during the week of Rosh Chodesh Nissan and why was it so historic and significant? The event was a siyum on Masechta Chulin that the Daf HaYomi had recently completed, which is a great simcha in and of itself, but truth be told, it was far more significant than that. 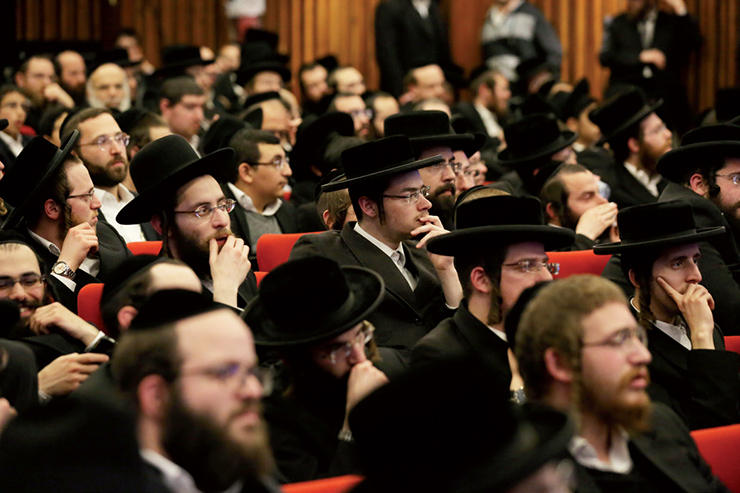 A Battle Against the Torah Requires a Spiritual Response

It is no secret to everyone living in Eretz Yisrael and many in the diaspora that the Torah observant population of Teveriah is under siege. The recently elected mayor of Teveriah, Ron Kubi, is a rabidly anti-religious demagogue who has very effectively used social media in his frenzied battle against religion in Teveriah and against charedim in particular. He has made a conscious effort to trample on the kedushah of Shabbos in the city and has done everything in his power to thwart the growth of the city’s religious community.

Recently, a number of Teveriah’s prominent Rabbonim and askanim went to HaGaon HaRav Gershon Edelstein, shlita, Rosh Yeshiva of Ponovezh, to consult him on what they can do. The Rosh Yeshiva’s unequivocal reply was that if he is trying to retard the growth of Torah and denigrate it’s honor, then the response must be to increase Torah learning and k’vod haTorah in the city.

It was in light of this advice from the senior Gadol Hador that the hanhallah of Dirshu decided to invest a tremendous amount of resources in Teveriah, promoting limud haTorah and accountability in learning.

After thanking Dirshu for promoting Torah in the city in an unprecedented way, Rav Ezrachi went on to thank an unlikely protagonist in the drama occurring in Teveriah during recent months. The Rosh Yeshiva said, “When the Bnei Yisrael left Mitzrayim, we find that Pharaoh regretted sending them away and ran after them in an attempt to force them to return. The passuk tells us, ‘Pharaoh hikriv - Pharaoh came close’. Close has a positive connotation, coming close to someone is a term generally used in the positive sense, but Pharaoh had no positive intentions?! He wanted to destroy the Bnei Yisrael! Chazal, however, tell us that something positive did come out of his efforts. As a result of their fear, Pharaoh succeeded in ‘drawing close’ the hearts of the Bnei Yisrael to their Father in heaven. When the Bnei Yisrael saw Pharaoh drawing close, when they understood his diabolical designs against them, they davened to Hashem! They increased their yiras shomayim.”

Rav Ezrachi continued, “I therefore want to give thanks to those here in Teveriah who, through their diabolical actions, have succeeded in bringing so many Teveriah residents closer to Hashem as can be evidenced by this massive, beautiful event. After all, as a result of this event tens of new shiurim will be established by Dirshu in this city, tens upon tens of new chavrusa partnerships will be started, so much Torah and so much yiras shomayim will be added in this city!”

At the siyum, Dirshu announced that they will open more than ten new Daf Yomi shiurim in Teveriah as well as Daf HaYomi B’Halacha shiurim. In addition, they will accept any new learners who want to join their programs and take the test without the usual prerequisites that are in place in other locales in Eretz Yisroel. They will also be giving shiurim for aspiring maggidei shiur to improve their delivery skills.

Hagaon HaRav Shimon Baadani: Chizuk in Limud HaTorah, a Harbinger for the Geulah

One of the Gedolim who has expressed great worry over the fate of Teveriah’s Jews is Rav Shimon Baadani.

Rav Baadani addressed the assemblage like a father speaks to his sons. He said, “I have occasion to travel all over the world and wherever I go, I see this wonderous development, a Torah revolution that is transpiring. So many people who never learned Torah are starting to learn with such dedication. “They are not just learning Chumash, but Gemara too! It is not just bnei yeshiva, but businessmen too! When the Torah promises something, we know it will be fulfilled and we have now seen with our own eyes how it is being fulfilled!

“I am sure that in the merit of the additional Torah being learned here, he who battles Yiddishkeit, he who declares war on Shabbos will not succeed. I truly feel that Hashem sent the difficulties to this city in order to encourage us to strengthen ourselves.”

Rav Baadani and Rav Ezrachi were preceded by a fiery drasha given by the son of the Sanz-Klausenberger Rebbe, HaGaon HaRav Yosef Moshe Dov Halberstam, shlita, who serves as Rosh Yeshiva of the entire network of Sanzer Yeshivos and came as his father’s personal emissary.

The final address of the evening was given by Rav Dovid Hofstedter, Nasi of Dirshu.

Rav Hofstedter began his address on a personal note. “When I first came to Teveriah many years ago, I was met with a spiritual midbar, a spiritual desert. Today, however, we see the Torah community growing, blooming and blossoming, Baruch Hashem!

“Still,” Rav Hofstedter remarked, “we the geulah in Teveriah and in the entire world has not yet come. There is increased Anti-Semitism, around the globe. Even in Eretz Yisrael, with all of the increase in Torah, there is so much hatred for the Torah, r”l. How do we explain this?

“Perhaps we can turn to the well-known Medrash that says, ‘When the time came to redeem Bnei Yisrael from Mitzrayim they did not have mitzvos. Hashem therefore gave them the mitzvah of korban Pesach and bris milah

“The Jewish people became influenced by the culture of Mitzrayim. They enjoyed the Egyptian holidays, danced with them and mixed with the goyim - that is how they sank to the 49th level of tumah…

“The only way to extricate themselves from the culture of Mitzrayim was with mesiras nefesh, with blood - blood of milah and blood of Pesach - real mesiras nefesh.

“Yes, we have zechusim, but to be an oveid Hashem requires sacrifice. To think that with a 30 or 40-minute, superficial seder we are yotzeh and then we are done?!

If we show that we love our mesorah, we learn with every fiber of our hearts and our souls, and cut ourselves off from the culture of the goyim, then certainly Hashem will help us and, just as we were redeemed in the month of Nissan from Mitzrayim, so too will He redeem us once again in Nissan with the geulah shelaima.”