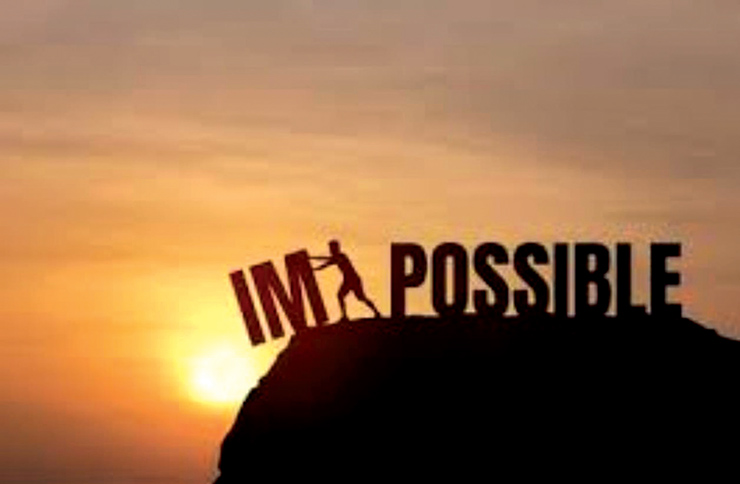 There were once two boys who went skating on a frozen lake. As they were enjoying themselves, the ice suddenly cracked, and one of the boys fell through into the icy water. His friend started frantically reaching for him, but he was too late, and the boy got swept underneath the ice. Desperate to save his friend, this scrawny boy quickly looked around, saw a tree in the distance, and rushed over to try to pull off a branch. After tugging for a few seconds, he managed to crack off a huge branch, and he then quickly ran back to his friend. He smashed and thrashed at the thick ice until it finally cracked and he was able to grab onto his friend. He dragged him back to the shore just as the ambulance arrived, and miraculously, they were able to resuscitate him.

What could we do if we didn’t listen to the voice in our head that tells us we can’t, but instead listened to that even smaller voice within us that tells us that we can? Let us explore this topic in relation to this week’s parshah.

As Great As Moshe Rabbeinu?

In Parshas Sh’mos, we are introduced to Moshe Rabbeinu, perhaps the greatest person who has ever lived. Moshe not only led the Jewish people out of Mitzrayim, but also received the Torah on Har Sinai. He fasted for 40 days and 40 nights, surpassing all human boundaries and limitations, and the Torah itself testifies that no one reached the level of n’vuah that Moshe was able to attain. Yet, the Rambam (Hilchos T’shuvah 5:2) says something absolutely shocking. He claims that everyone is capable of becoming a tzadik like Moshe Rabbeinu. How is this possible? Not all of us are able to become leaders, let alone become the greatest leader in human history. So what does the Rambam mean?

Are We All Capable of Greatness?

We can take this question a step further. The Gemara in Nidah 30b includes a cryptic and perplexing line. The Gemara says that just before each of us is born, we are forced to take a neder, an oath, that we will become a tzadik. Once again, we face a problem. An oath is a guarantee, a promise. How can we promise that we’ll be a tzadik? Not all of us are cut out to be great, to be a tzadik. How can we understand this strange Gemara? Let’s begin by going back to the beginning of this Gemara in Nidah 30b.

The Gemara discusses a very enigmatic tale describing the initial stage of our formation. The Gemara explains that when you were just a fetus, you were in a perfected and transcendent state of being; a mal’ach taught you kol haTorah kulah, the entirety of Torah, and you saw all of reality with a crystal-clear lens. However, the Gemara continues with an anticlimactic punch (literally): Just before you were born, this mal’ach struck you on the mouth, causing you to forget everything you learned.

Two obvious questions arise: Why does the mal’ach make you forget what you’ve learned? But more importantly, if he’s going to cause you to forget it, why teach it to you in the first place?

The Vilna Gaon answers as follows: When the Gemara states that the fetus learns all of Torah, it doesn’t mean that you were learning basic Chumash with Rashi. Rather, it refers to the deepest realms of Torah, a transcendent Torah that is beyond this world. This Torah is the very root of reality, and you understood every aspect of it clearly. Not only were you shown this level of Torah, but you were also learning your specific share of Torah – you were being shown your unique purpose in the world, and how your unique role fits into the larger scheme of the human story as a whole. You were given a taste of your own perfection, of what you could, should, and hopefully will become.

But most importantly, when the mal’ach struck you, you didn’t lose this Torah; rather, you lost access to it. Instead of it disappearing completely, this state of self became buried deep within your subconscious. The reason is as follows: What you received in the womb wasn’t real, it was merely a gift; something unearned and undeserved. The goal of life is to come into this world and rebuild all that you once were in the womb. However, this time, it will be real, since you’ve built it yourself. In essence, your job in this world is not to create yourself, but rather to recreate yourself – to re-attain your original state of perfection, as you were shown by the mal’ach. This time, however, it has to be done through free will, by choosing to become great. Only by overcoming challenge and difficulty, and asserting your will-power, can you fulfill your true potential. In essence, our entire life is a story of t’shuvah – returning to our original, higher, and true self.

Your Life Is Uniquely Designed for You

We can now begin to explore the nature of the human condition. As the Ramchal explains, everything in your life is here to help you fulfill your unique role. Many people are unhappy with the life they have, constantly comparing their lives to those around them, always searching for another reason to complain. If only we understood that we were each given a unique package, we’d find so much more joy in life. Your body is the exact body you need to carry you through this world. Your psychological clothing, which includes your intellect, imagination, memory, emotions, and personality, were perfectly crafted and designed for you and your unique role in this world. You were born into a specific family at a specific time period, were sent to a specific school, in a specific community, and were exposed to a particular set of social influences. All of these things make you who you are.

Everything in your life is there only to help you grow and become the person you were meant to become, to manifest what you were shown in the womb, to recreate your ideal self. Your job isn’t to become great, it’s to become you! That is true greatness. Many people struggle to find their tafkid – their purpose in the world – because they’re looking in the wrong place. You can’t find your role by looking outside; you can only find it by looking deeper inside, within yourself. True growth requires us to grow from within. We need to go into a room, by ourselves, and ask the difficult and key questions: Who am I? What drives me? What makes me unique? What are my talents? What are my passions? What can I contribute to the Jewish people and the world as a whole?

The Antidote for Jealousy

With this in mind, we can now understand why comparison and jealousy are completely illogical. If each of us is unique and different, how can you compare yourself to anyone else? As Einstein famously said, “If you judge a fish on its ability to climb a tree, it will spend its whole life believing it’s foolish.” You can’t compare yourself to someone else, as you are two completely different people. If we genuinely understood this, we would never be jealous. Once you realize that everything in your life is exactly what you need to fulfill your unique potential, you’ll stop looking around at what other people have, and start utilizing what you have. To take it a step further, you can actually begin to be happy for other people’s success, as you will realize that we aren’t competing with each other; we’re all on the same team, we’re all part of the cosmic symphony of life. Your ear would never be jealous of your hand, since they’re both part of the same body; so, too, if you realized that we’re all part of the same “body,” you’d never be jealous of anyone else.

We can now return to our original question. A tzadik doesn’t refer to an objective image of greatness; rather, a tzadik is one who fulfills his (or her) role and actualizes his unique potential. Tzedek literally means “correctness” and refers to truth. Becoming a tzadik means living your truth and bringing your unique potential into actuality. When the Gemara says that we each made an oath to become a tzadik, it’s referring to our promise to fulfill our unique role in this world.

We each have our mission. Some will be on the front lines, while others may be more behind the scenes. Both are tzadikim, both are fulfilling their unique role. As Rav Elchanan Wasserman explains in his Maamarim, when the Rambam explains that each of us can be a tzadik like Moshe Rabbeinu, he specifically uses the word “tzadik.” We may not be able to become as objectively great as Moshe, but we can each become subjectively as great. Just as Moshe fulfilled his unique potential, so, too, we can each fulfill our unique potential.

It’s time to take the next step in your journey through life. Just like the boy from the lake story, it’s time to say “Yes, I can.” We need to stop holding ourselves back from our own greatness. You’ve got greatness within you, and it’s your responsibility to bring that greatness to the world! For, in truth, we can all become a tzadik like Moshe Rabbeinu.