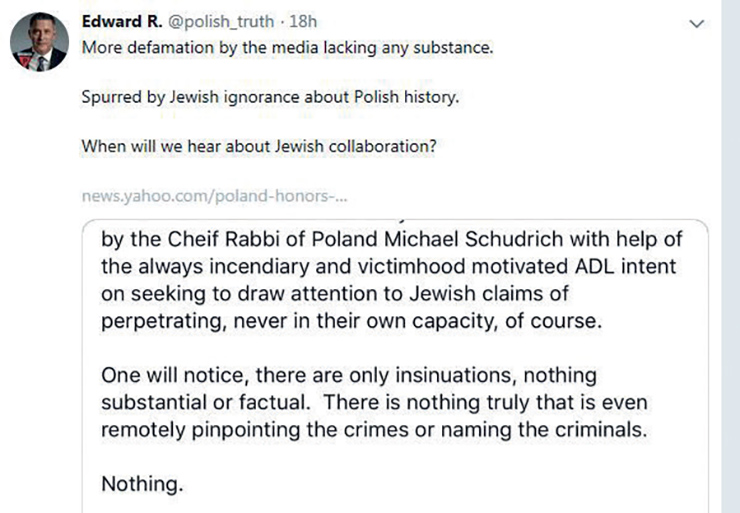 With this view of the contemporary church in mind, it came as a surprise for this author to learn that the St. Stanislaus Church in Ozone Park was planning to host Edward Reid on Sunday, August 25, who would be speaking on the topic of Poland during the Second World War. The main premise of Reid’s teachings is that the Jewish community’s claims of Polish complicity during the Holocaust is a lie designed to shift attention away from alleged Jewish wartime crimes.

In Reid’s view, the Judenrats were as guilty of collaboration as the Ustashe, Iron Guard, and Arrow Cross movements, and Jewish partisans had murdered innocent Polish villagers in their struggle against the Germans. He also asserts that the Jewish community does not provide enough attention towards Polish victims of fascism and Polish individuals who rescued Jews, at the risk to their own lives.

Anyone with a basic knowledge of the Holocaust understands that Jews in uniforms who patrolled the ghettos under Nazi orders were not willing collaborators, but inmates with orders to comply. The Jewish community recognizes the bravery of Polish resistance groups that fought the Nazi occupation and assisted Jews in escaping, hiding, and resisting. Poland has the largest number of Righteous Among the Nations who risked their lives to shelter Jews. 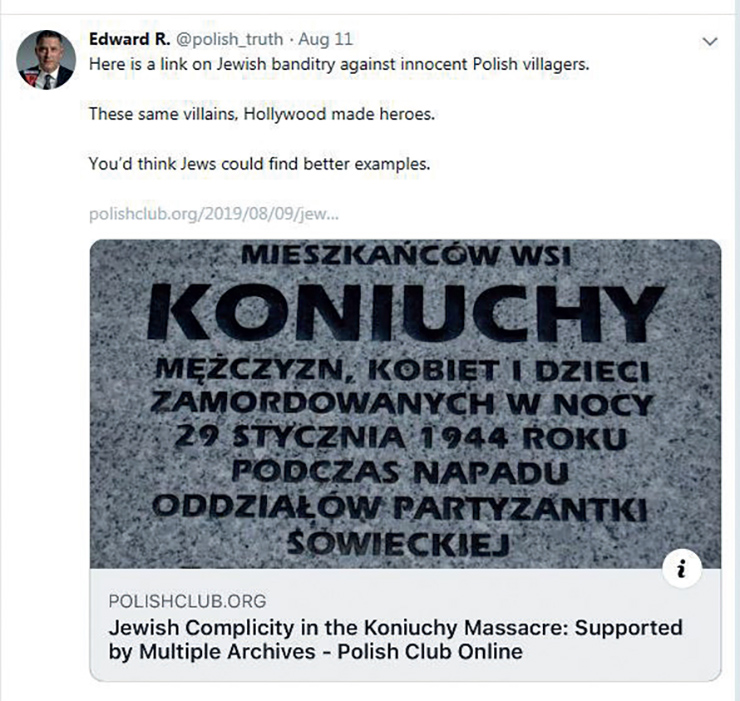 With ten days to go before Reid’s planned lecture, I was not sure which organization to contact. I emailed Rabbi Yoel Schonfeld and my friend Zelig Krymko. Both of them had been outspoken last May when an Episcopal church in Astoria was about to host a panel of anti-Israel speakers. They succeeded in having the leftist event canceled, arguing that the event would hurt Christian-Jewish relations. Predictably, the leftist organizers fumed at the quick show of activism by members of the Queens Jewish community, but we did it in a positive and constructive manner.

I replicated this strategy by writing a letter to Father Paul C. Palmiotto, bishop of St. Stanislaus, requesting for him to cancel Reid’s lecture. I noted that this church has long functioned as a community center for Polish-Americans in Southern Queens and positive aspects of Polish history as it concerned the Jews. “My community recognizes the patriotism of Polish-Americans, and we strive to maintain good relations between our respective communities,” I wrote.

Demonstrating my awareness of how the Polish Catholic Church was affected by the war, I noted, “Within the Catholic Church, there are millions of martyrs murdered by the Nazis, such as St. Maximilian Mary Kolbe, and the 108 Blessed Polish Martyrs who were beatified by the Vatican in 1999 in recognition of their heroism and devotion to faith and country.”

I also added, “An accurate view of history, however, cannot dismiss members of the Polish nation who collaborated with the occupiers to the detriment of their countrymen, enriching themselves on the spoils of their dead neighbors.”

Having worked for Councilwoman Karen Koslowitz, I remember how she told me about the pogrom that murdered her grandfather. This was in Krakow, long before the Holocaust. I also learned about the 1946 pogrom in Kielce, where returning Jewish survivors were murdered by their Polish neighbors. When I lived in Forest Hills, I sat in shul in front of Abe Cyzner, a survivor from the town of Chrzanow. He’s been back to his birthplace and said how there’s still anti-Semitism permeating daily conversations among some of the townsfolk, more than a half-century after the Holocaust.

A couple of days later, a reporter from the Queens Chronicle called me about this event, and I told him that I wrote the bishop a letter and handed it in person to his secretary. Apparently aware of Jewish efforts to cancel the lecture, Reid tweeted, “I know you’re following me, you criminals. Regardless, I will speak the truth about your lies and hate. You will not stop me.” 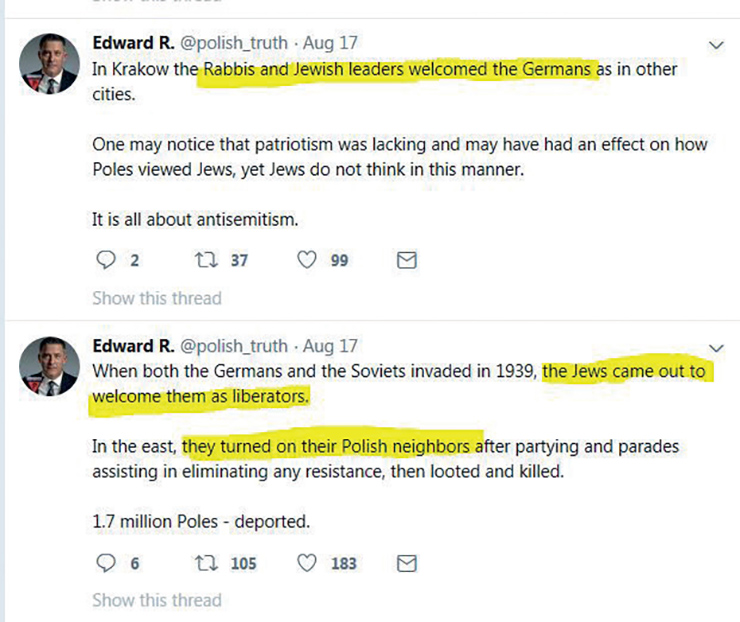 His trail of anti-Semitic tweets does not require much scrolling:

August 15, “When will we hear about Jewish collaboration?”

August 8: “Jewish war crimes are nothing new in history, just most people don’t know about them and if they do they’re afraid to speak up! One land that sheltered Jews for 1,000 years and paid the price was Poland.”

I quoted these tweets in my letter to Father Palmiotto as evidence of his hateful views. Unfortunately, such tweets have received dozens of likes and retweets, mostly by Polish individuals, and he is also raising money online for a documentary film about Poland’s resistance against the Nazis. Curiously, his GoFundMe page is filled with patriotic imagery designed to solicit the sympathy of Polish-Americans, leaving out the vile anti-Semitism. One can only wonder how his film would depict the Jews.

We may not be able to stop Reid from having a social media platform, but we can certainly make an effort to keep him out of our borough by reminding the Roman Catholic Church of the strides it made in church-synagogue relations, and how terrible it would be for a church to host an anti-Semite.

As of this past Tuesday, the church secretary said that the event is being reviewed, and a decision has not been made on whether it will take place.