Details
Shabsie Saphirstein, with family and friends of the niftar

On Shabbos Pesach, Rabbi Alexander Zishe Meyer ben HaRav Chanoch Henach and Bina Rochel Blum zt”l, lovingly known to many in Kew Gardens Hills simply as Zishe, passed away from COVID-19. Throughout his professional life, Rabbi Zishe Blum wore many hats: respected Long Island rabbi, principal, teacher, and mentor to many cherished students, who all noted his unique enthusiasm. He was extremely humble, never expecting any honor or accolades.

Old Williamsburg, Brooklyn, was where he called home from the 1930s through the 1950s, gaining an education at Yeshiva Torah Vodaath, when yeshivah schooling was unpopular, under the guidance of yesteryear luminaries comprising Rav Uri Mayer Kahanow, Rav Simcha Sheps, Rav Sharaga Feivel Mendelovitz, Rav Reuvain Grozovsky, Rav Yaakov Kamenetsky, and Rav Gedalyahu Schorr, zichronam livrachah. In his hometown, he encountered various chasidishe Rebbes who transplanted Torah within the United States, many who survived the Holocaust. These venerated sages included the Rebbes of Satmar, Modzitzer, Skolyer, Boyaner, Skolener, Bostoner, Novominsker, Skeverer, and Kapishnitzer. Over the years, Rabbi Blum told vivid anecdotes of the extraordinary “Polishe Shtiebel” that he remembered from his childhood. As a youth, Rabbi Blum was the “primary caretaker” for his elderly grandfather, Avrohom (Trzcina) Blum, who lived with his family. The family believed that in the z’chus of the kavod that he showed to his grandfather, Hashem protected him in his old age. 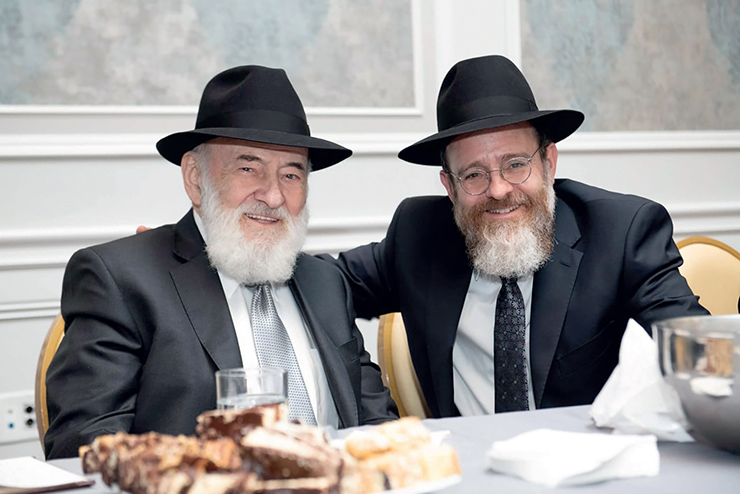 The Blum home in Kew Gardens Hills was the epitome of an Orthodox residence, always open to guests, including neighborhood singles. In 2004, Joshua Karlip, one such single, was fortunate to join the Blums at a Shabbos meal. “As a single, I had sat at many Shabbos tables. I never before felt the k’dushah and ahavas Yisrael experienced at the Blums. I soon became a regular, and from a regular I soon became an honorary member of the Blum household.” Karlip remembered Rabbi Blum’s dignified demeanor and impeccable dress, always donning a suit and tie, which signified an outer manifestation of the inner refinement of his character. “Rabbi Blum’s simchas ha’chayim was derived from a deep satisfaction of living in the way of Hashem. Rabbi Blum embodied gadlus ha’adam. All his actions and interactions reflected his awareness that he was a tzelem Elokim.

Rabbi Blum greeted everyone – young and old, frum and non-frum, Jew and non-Jew – with the same warm smile, twinkle in his eye, and kind word that made them feel better for interacting with him.” Jay Garrel is another example of someone who was a ben bayis in the Blum home, dating back to 1983. Garrel and his family developed a deep, personal, everlasting bond with Rabbi Blum and learned many things from him. None shined brighter than Rabbi Blum’s willingness to treat those he encountered with respect and admiration, always extending a greeting and a gentle smile, eager to ease the tension of their day. One lesson Garrel expounded on was the theme of honest work. “Rabbi Blum committed 20 years to the rabbinate in Babylon, Suffolk County, only to upend his position in the mid-1970s to retool his career to sustain his family. Then, he taught in the Public School system, became a Hebrew School principal, yet still allocated time to Torah study.” Garrel’s in-laws, Honey and Joseph Sungolowsky, recognized Rabbi Blum’s kiruv endeavors where he succeeded in attracting countless souls to Torah and Jewish culture.

Above all, Rabbi Blum was a family man who went above and beyond to assist his eishes chayil, Rebbetzin Rhoda (Nathan) Blum, and forever lavished attention on his four children. That thoughtfulness, together with his wife’s wonderful chinuch and values, led each child to perpetuate their parents’ legacy of Torah, emunah, and chesed. In an interview with his grandson Reuvain Blum, Rabbi Blum exclaimed, “Being a grandfather, I feel prouder than a peacock!” As a doting grandfather, Rabbi Blum often referred to his grandchildren as royalty, offering his knee to each child whenever he or she needed a chat. They indeed are royals – the grandchildren and great-grandchildren of a prince.

A Friend to All

Many gravitated toward Rabbi Blum for his unconditional love and never-ending patience. “My father was an ehrlicher Yid who treated all with the utmost respect. With a good word, parable, compliment, or joke, my father made a lasting impression,” described his son Rabbi Moshe Blum. Michael and Bonnie Gerbitz were cousins of Rabbi Blum who recalled the gentle and soft-spoken nature that always made them feel a strong sense of sincerity and genuine interest in their lives. “You could just ‘feel’ that Rabbi Blum was a person who really cared and was always listening with much patience and interest,” the couple related. This sentiment resonated within everyone Rabbi Blum encountered.

His beloved daughter and Kew Gardens Hills resident Mrs. Miriam Finestone remembers the beautiful twinkle in her father’s keen eyes along with joyous childhood memories. “My father loved everyone unconditionally, and people sensed this and they gravitated toward him. Everyone wanted to be in his presence. There was always shalom bayis in our home. My father would do anything just to ‘make Mommy happy.’ People enjoyed coming to our house as they sensed the shalom bayis and the calm atmosphere. My father’s love for science and nature kept an energy within our busy home. We very rarely had a need for outings. My father’s ‘home-grown fun’ kept us happy and entertained. My father was a true tzadik with a capital ‘Tza’ (as my father used to jokingly say about others).” Neighborhood regulars would await the summertime to stroll down 147th Street, just off Jewel Avenue, to enjoy Rabbi Blum’s talent in horticulture with potted kosher esrogim and a vegetable garden. Rav Gedalyahu Schorr once related, “You can make a brachah on these,” referring to Rabbi Blum’s citrons. 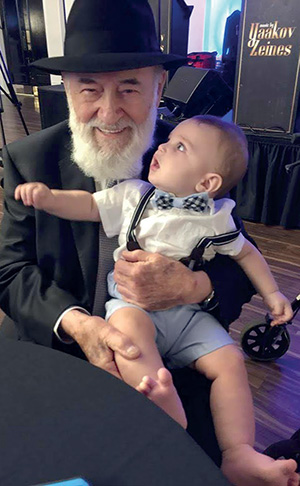 When the Blum family arrived in Kew Gardens Hills, Rabbi Blum assumed the position of an instructor for gifted students. He also educated gentile children in Elmont Public School about morals, ethics, civics, and always speaking appropriately. Later, Yeshiva Ketana of Queens was privileged to have Rabbi Blum teach their students “hands-on” science enrichment. The children and teachers alike shared an electric excitement for each thrilling experiment.

Miriam Gruza reminisced about preparing the science curriculum together with Rabbi Blum. Longtime Kew Gardens Hills residents and devoted yeshivah employees Miriam Schlanger and Baila Biderman both noted Rabbi Blum’s talent of intertwining each secular lecture with Hashem’s divine gesticulations. Mrs. Schlanger expressed, “Rabbi Blum would display the experiment of the day to the teachers and share his excitement and brilliance of Hashem with the staff.” Mrs. Biderman continues Rabbi Blum’s creative third grade initiative of observing fertilized eggs incubate for three weeks until they ultimately emerge. “Every year, Rabbi Blum would be so excited about the birth of the chicks and, after retiring, would still call to wish me a ‘mazal tov’ once they hatched.” Sheila Schulman, another teacher at YKQ, remembered Rabbi Blum’s warm smile and personable character. “Rabbi Blum imparted his wisdom, specifically his expertise in botany, by showcasing Hashem’s charming world. Esrog seeds would be planted and we watched as a stunning plant would gradually develop,” said Mrs. Schulman. Moshe Yehuda Bondi, a student of Rabbi Blum’s from 2005 until 2011, related that when Rabbi Blum saw him in the hall, he said. “Look at that smile!” Bondi recapped as a line often repeated by Rabbi Blum giving him a heartwarming lasting sensation until today for merely observing the beam across his face. Yaakov Gruza recalls participating in Rabbi Blum’s captivating classes and being invited into the Blum residence to see his fish tank. “On one occasion, the niftar shared his aravos branches with me and explained how I could nurture my own,” recollected Gruza. Eliezer Zev Schechter, currently a high school junior, has etched in his mind a monstrous corn plant once a fixture behind the door of Rabbi Blum’s YKQ science laboratory. Rabbi Micha Berger has long been a confidant of Rabbi Blum’s and detailed his scientific appreciation on a deeper level, remarking that the Blum basement boasted both a hand-cranked electric generator and a Van De Graaff generator.

Maintaining a regular schedule and adherence to minyanim was a strongpoint for Rabbi Blum, especially in his later years. “My father was a Torah thinker who enjoyed his learning, was an eloquent speaker and a master baal drashah,” illuminated son Rabbi Avi Blum. Rabbi Blum’s self-sacrifice for Torah learning and adherence to davening with a minyan was unparalleled. Rabbi Shmuel Moskovits delivers a noteworthy afternoon shiur at the Young Israel of Queens Valley where Rabbi Blum was a regular. “Rabbi Blum would make every effort to attend the shiurim, not allowing any obstacle to get in his way, even partially joining when a doctor’s appointment interfered,” stated Rabbi Moskowitz.

HaRav Noach Isaac Oelbaum of Khal Nachlas Yitzchok, related: “Rabbi Blum was an example for the younger generation. Despite extreme difficulties walking, Rabbi Blum attended my daily evening shiur, relishing every moment.” Rabbi Oelbaum observed, “Rabbi Blum personified true ahavas haTorah; one could see the sheer joy on his face whenever he listened to the shiur.” Mrs. Finestone added, “When traveling to shiurim at night became a hardship, my father would listen via phone and then continue on afterwards, partaking in Maariv, keeping a connection to the holy walls of the shul.”

HaRav David Z. Sheinfeld related that Rabbi Blum’s relationship to his k’hilah, Khal Degel Israel, stretched over 40 years, stemming from an admirable relationship with the Prushkover Rav, HaRav Shaul Dovid Margulies zt”l. “We were fortunate to have Rabbi Blum serve as our outstanding baal t’kiah on Rosh HaShanah and lead P’sukei D’Zimrah on the Yamim Nora’im.” After witnessing a baal t’kiah blunder in his youth, Rabbi Blum decided to take up the craft, honing his skills over 50 years. Rabbi Sheinfeld noted, “Rabbi Blum humbly related that Rav Yaakov Kamenetsky once described his shofar blowing in Yiddish as ‘an antik;’ a treasure.”

Rabbi Zishe Blum zt”l passed away barely a week after the p’tirah of his son Rabbi Matis Blum zt”l, from the same illness. His grandson, Mordechai Ehrenkranz, said, “It was certainly a chesed of Hashem that neither of them knew about one another’s passing until they stood proudly in the Olam HaEmes and were reunited.”