On the eve of Tish’ah B’Av, as many in our community were preparing for the solemn day ahead, the Fazilov family of Kew Gardens Hills was dealt a terrifying ordeal. Video from a home surveillance system depicts a bearded African American man entering the family home just off 71st Avenue and 137th Street as if it was his own. Clad in a gray sweatshirt, jeans, and a tan beanie, the man brazenly attempted to rob the dwelling as the homeowner was present. 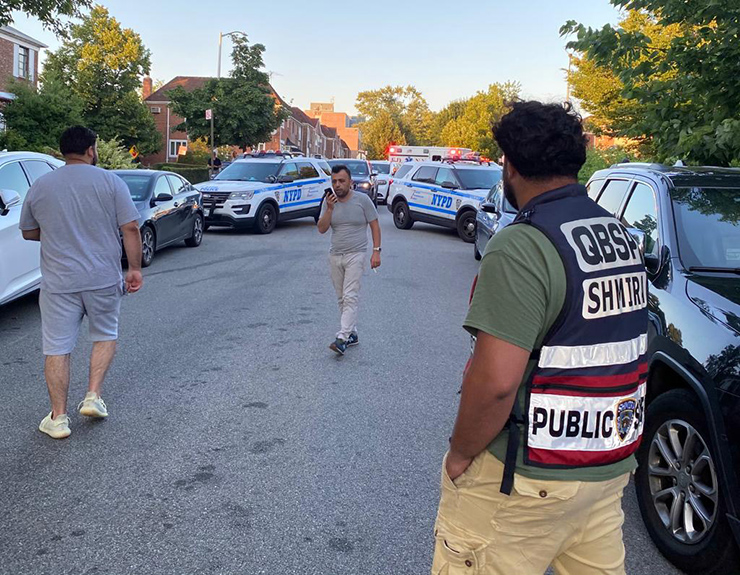 The homeowner was relaxing on his couch before heading out to Rabbi Haimoff’s Ohel Simcha synagogue for eicha services when he heard someone enter his home. Assuming it was his son Nathaniel returning from a seudas hamafsekes meal at another son’s home nearby, he made nothing of it. But he soon realized a strange man was lurking about and immediately dialed Queens Borough Safety Patrol – Shmira. Shaya Llyod, a local coordinator, related, “Our volunteer members responded immediately, and we instantly called the NYPD who as well wasted no time in their prompt response.” Nataniel, 20, also alerted 911 operators, after receiving a call from his alarmed father and quickly headed back home. Concerned for her safety, he asked his mother, an New York University medical assistant, to remain behind. Nathaniel, a full-time college student, soon reached his home alongside his brothers Avner and Rachamim, who also live in the Kew Gardens Hills area.

The officers from the 107th police precinct detained the barefaced burglar, who initially acted as if he believed it was his own home. Many residents of Kew Gardens Hills feel the neighborhood is considered safe and feel comfortable keeping their doors unlocked if they are inside. This incident exemplifies how vigilant we must be in these changing times.

The perpetrator arrived in the area in a stolen Dodge Durango SUV, taken from a resident of Manhattan. Shmira volunteers found the vehicle parked on the street and alerted police of its whereabouts to assist in the investigation.

Shmira volunteers arrived on the scene in under two minutes after receiving the hotline call, roughly the same time as the NYPD, remaining present to ensure the criminal did not try to scurry off. Keeping our neighborhood safe takes immense teamwork, and collaboration with law enforcement, to fight crime together.

The home invader was taken by the police officers to a local hospital for psychiatric evaluation.