MSH’s 2019 Valedictorian, Hadassah Krigsman, is a student of both academic and creative strengths, who has a deep sense of responsibility toward others, dedicated to achieving excellence in everything she does. She goes about her academics with a quiet but fiery intensity, aiming for nothing short of absolute mastery. During her tenure at MSH, Hadassah has consistently challenged herself to excel in both academic and extracurricular activities. In her senior year alone, Hadassah completed three AP courses, multiple honors classes, was the co-editor of the yearbook, and captain of the basketball team. Additionally, Haddasah has been on the math team and college bowl team throughout high school, and captained the college bowl team this year. With all that, she also joined the inaugural MSH soccer team this year, and has been the starting third baseman of the softball team the last two years. Despite her many varied endeavors, she excels in all of them. 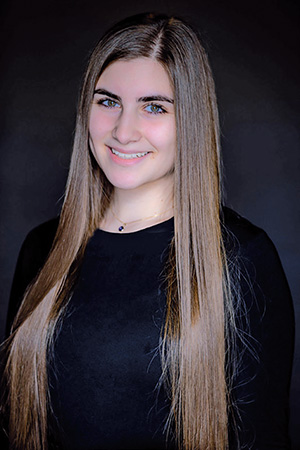 Hadassah is extremely gifted in the creative arts. Her mathematical mind, combined with her artistic talent, make her a uniquely creative force who adds out-of-the-box thinking to the hard sciences and mathematical precision to the humanities. As one of the student school photographers, one will often see Hadassah in the hallway, camera in hand, taking pictures or a video of her fellow students for the yearbook and social media campaigns. In fact, her photography and videography skills are so impressive that, as a camper on a summer program, she was asked to create a video to be used for their promotional materials. Encouraged to enter by her FIT summer instructor, Hadassah entered and won an award from the National Young Arts Foundation.

Hadassah moves through life with purpose and poise, serving her community outside school as she spends summers and weekends as a volunteer at the Kitty Cove animal shelter. As a well-rounded student with an overall 4.0 GPA in both Judaic and general studies, Hadassah is truly deserving of the valedictorian award. After graduating MSH, Hadassah plans to attend Amudim in Israel, and then Macaulay Honors Queens.

Salutatorian Eliana Hirsch is naturally intelligent, but she also has a lot of grit. Her academic strengths are evident in her 4.0 GPA, top scores in her AP courses, and equally strong ACT and Regents scores. Eliana is a student who deals with life’s challenges with poise and pushes herself to excel in all of her endeavors. She genuinely wants to understand, and to learn li’shmah. She aspires to be a creative, original thinker, and is passionate about mastering whatever she learns.

Eliana is a leader. The myriad of leadership positions she’s taken over the course of her high school career demonstrates her take-charge personality and determination. Lobbying to start a school band, forming a glee club during her free time, the head of choir her junior year, and captain of Torah Bowl in her senior year – these are just some examples.

Eliana is a musical talent within the halls of MSH. Not only is Eliana often cast as one of the lead roles in the school production, but she is often called upon to perform, both as head of the school choir, and on her guitar, at many school functions. Eliana, along with two classmates, formed a band to perform at community events. When she is not performing, Eliana divides her time between school work and volunteer work with Friendship Circle, an organization that caters to special needs children, where she visits these children in their homes on a weekly basis. After graduating MSH, Eliana plans to attend MMY in Israel, and hopes to pursue a degree in music therapy, allowing her to combine her love of music with her natural empathetic nature.