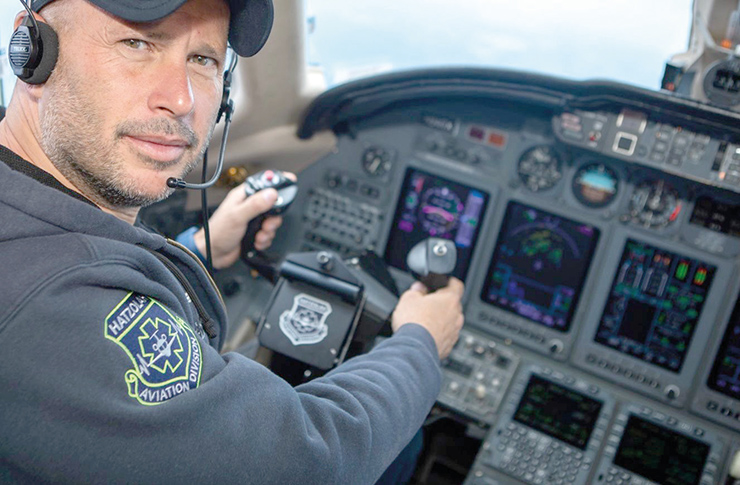 The past Shabbos, exactly one month after the collapse of the Champlain Towers South in Surfside, search efforts were officially ceased, bringing a close to one of the worst disasters in Florida history. It was two days later that the final unaccounted victim, Estelle Hedaya a”h, 54, was identified by her younger brother Ikey, bringing the total to 98 fatalities. This moment culminated a month of heart-wrenching t’filos for the Jewish community that committed to bringing peace to each affected family. Nobody who was found deceased is believed to have survived the initial collapse.

In recent editions of the Queens Jewish Link, we saluted the recovery heroes and memorialized the befallen. Now, we conclude this series, revealing the lives of other Jewish victims taken too soon and the humanitarian efforts of Hatzolah Air. 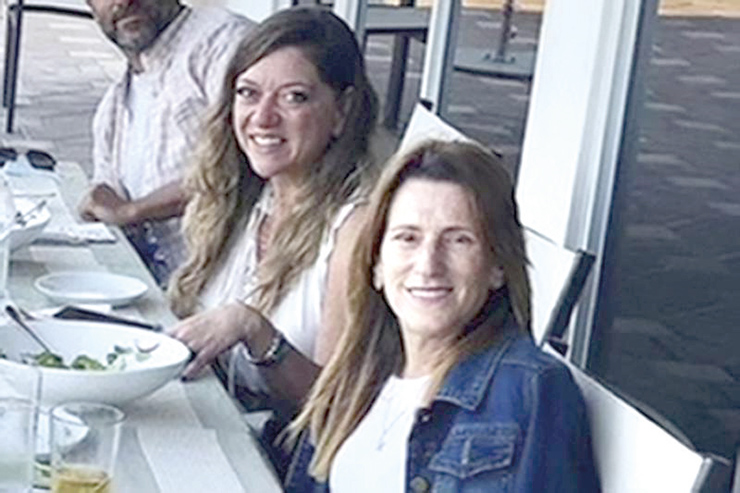 Devastated by the unfathomable tragedy, Hatzolah Emergency Air Response Team, the aviation division of Hatzalah, brought its resources to aid the brave first responders of Hatzalah of South Florida in their avodas ha’kodesh. Hatzolah Air personnel were onsite in Surfside to lend a hand and stand at the ready for the families of the victims. As a nonprofit disaster response organization headquartered in Kew Gardens, Hatzolah Air spreads far and wide attending to urgent and emergent calls for assistance, supporting independent Hatzalah operations around the country and beyond. Based out of Westchester County Airport in West Harrison, New York, its team of pilots, medical staff, dispatch coordinators, logistical crew members, and support staff remain committed to its core mission of supporting the aviation and disaster-response needs of all Hatzalah branches worldwide through critical care, disaster relief, dream trips for the unwell, and chesed shel emes activities like the Surfside mission. While most Hatzolah Air undertakings are curative and have an element of cheer with a precious opportunity to help another and ease a frightened passenger, the events of South Florida were clouded in sadness.

“Family members were asking if we could take them down to South Florida following the collapse,” explained Eli Rowe, President of Hatzolah Air. Rowe received a call on the morning of Thursday, June 24, the first of many, calling on the aviation volunteer group to get involved. “Always ready to respond when there is a chance to save a life or ease the sorrow of others, Hatzolah Air accepted its mission.” Rowe, who has experience in traumatic triage events, organized the team’s effort. “We first arrived with a five-member team all unfortunately under a misguided hope that victims would be pulled in need of lifesaving treatment. We knew the very real possibility that we would assist in burials. It was our foremost intention to handle this process before sh’kiah of that day,” said Rowe, expressing their desire to follow every practical halachic option. 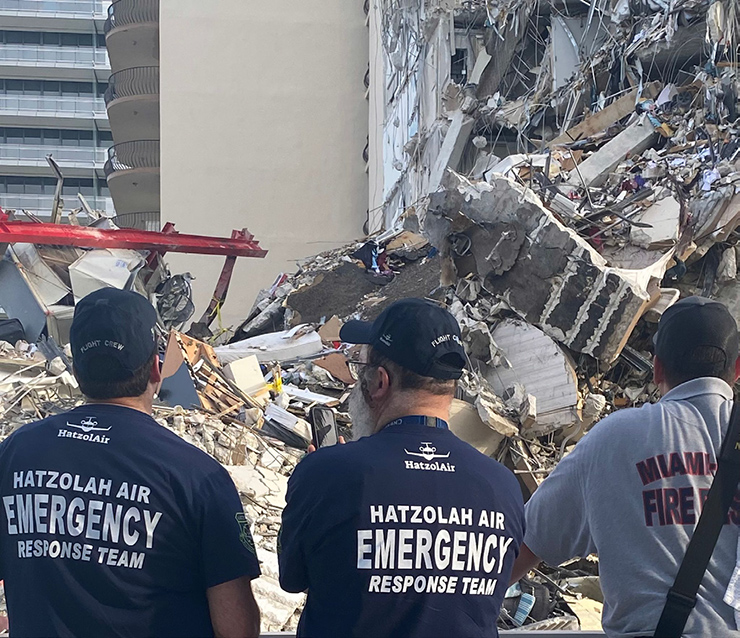 As the days progressed into weeks, Hatzolah Air offered to bring down rescue teams and arrange for the transport of local officials on an as-needed basis. These calls led to Hatzolah Air playing a pivotal role in the transport of the well-publicized Israeli delegation. Today, Hatzolah Air has three airplanes in service and has plans to grow to eight planes of varied sizes and amenities to handle various circumstances.

Previously, Rowe coordinated an intensive training week in Israel for 200 New York-based Hatzalah members, including paramedics, to increase their skills and apply innovative protocols when responding to larger calls back home. The Israeli officials from Magen David Adom are uniquely equipped to respond to mass-casualty and terrorist events. Rowe also offered to deploy these members, and trained with Golan Vatch’s Search and Rescue Brigade. Although that effort did not materialize, Hatzolah Air became a resource for family members to join planned Hatzolah Air flights to Florida.

As the realities set in, Hatzolah Air’s resourcefulness came into play. The organization, which generally does not transport niftarim and usually focuses on medical attention, was able to help bring the departed to k’vurah at a faster pace. “We were able to overcome the magnitude and complexity of niftarim, which made for a much bigger kavod ha’meis,” related Rowe. First, the situation played out for the l’vayos of Tzvi and Itty Ainsworth a”h, who were both transported for burial to Queens. Their seven children joined that flight, drastically easing concerns and heartache for the family.

“Our volunteers were very happy to help and showed extra sensitivity with family members,” noted Rowe. “It was a great kavod ha’meis for Jewish hands to be involved, and it was an honor to work alongside Hatzalah of South Florida, Misaskim, Chesed Shel Emes, and the chevrah kadisha to arrange the flights, coordinate with families, and transfer the niftarim, bringing about the necessary closure and peace at a difficult time. At the conclusion of our involvement, a dozen Hatzolah Air members were involved and we were able to simultaneously conduct a medical aviation mission in Cleveland uninterrupted.” 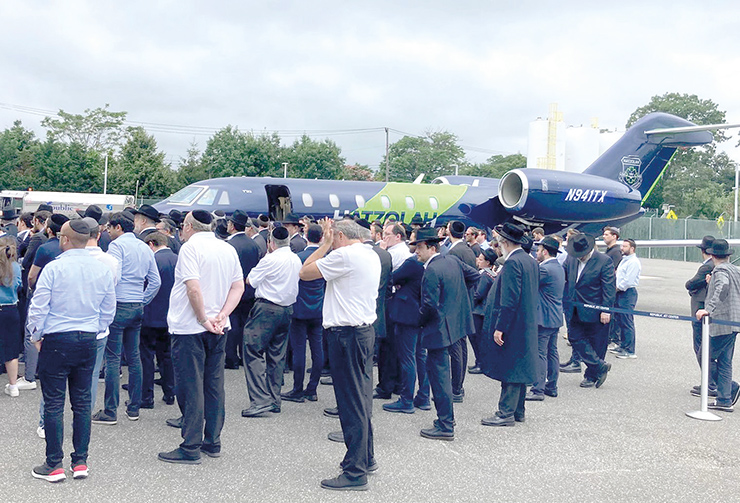 Hatzolah Air was also the go-to resource for the transports to New York of Chaim Rosenberg a”h, 52, on Thursday, July 8, and his daughter and son-in-law two days later, on Motza’ei Shabbos, July 10, for their joint l’vayah at Republic Airport’s Long Island Executive Airport in Farmingdale. Here, as well, the family was able to join the flights. Reb Chaim, a successful asset manager, settled in Surfside after a tumultuous year, when he had lost his wife Anna to brain cancer and his parents to COVID. He opted to dedicate his time to philanthropy, including Mercaz Shalom, a young adult mental health treatment center at the Bnei Brak campus of Maaynaei Hayeshua Hospital, and Tantzers, an organization that helps those with critical illnesses with uplifting visits at home or in hospitals. Due to Chaim’s involvement, Tantzers now hosts an array of programming and opened a family center. His daughter Malki a”h, 27, and her gifted husband Yisrael Tzvi Yosef (Benny) a”h, 32, of Lakewood, were also recovered, after traveling to spend Shabbos with Chaim. Benny’s love for a fellow Yid knew no bounds. He often lectured on faith and chizuk and was a talmid of the venerable rosh ha’yeshivah Rav Baruch Mordechai Ezrachi from Eretz Yisrael. Chaim’s l’vayah was held at Rabbi Chaim Yisrael Weinfeld’s shul, Khal Toras Chaim D’Flatbush. The three are survived by his son Shuly (Steven) and Elina Rosenberg and the daughter Paula, his son Yehuda (Mark) and Riqi Rosenberg and their son Sammy, his daughter Shoshana, her husband Gedaliah, as well as a stepson Joseph, whom he raised as his own.

Estelle Hedaya, a native of Brooklyn, was the final victim recovered. She was a spiritual person who turned to Hashem during times of struggle. She in turn gave this trait to her brother, who used her strength in the Above to uplift him during the monthlong ordeal. For three decades, Estelle followed the steps of her mother and built a career in jewelry, accumulating many acquaintances. In 2015, she moved to Surfside after accepting a job nearby. Hedaya was identified just after her dear friend Linda March, 58. March was a real estate attorney and administrative judge who moved to Surfside from New York to be closer to her sister-in-arms, Hedaya, after a prolonged battle with COVID. Together, the duo was fearless, and it is befitting that they returned to the Olam HaEmes together.

The work of the IDF in Surfside was quite astounding itself. Powered by their team back home, the group was able to identify the remains of 81 of the victims through 2D- and 3D-imaging, as well as speaking with family and being on the lookout for keepsakes and condo furniture. 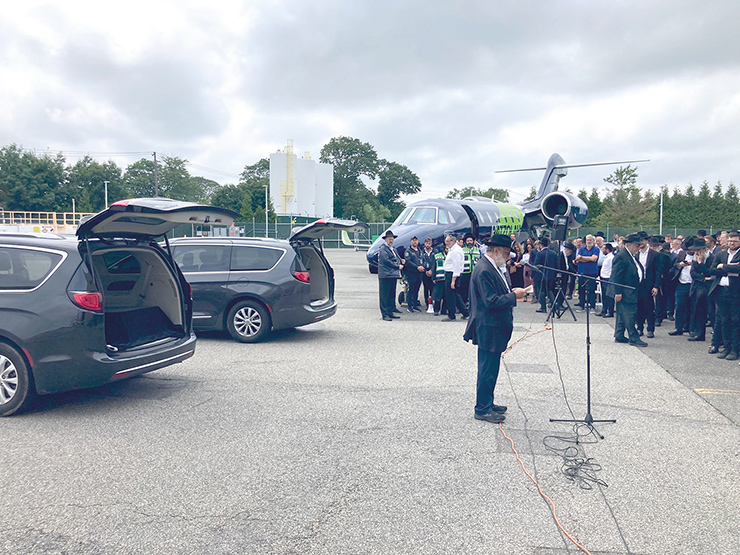 Dr. Yaakov Reuven HaKohen (Brad) Cohen a”h, 51, an orthopedic surgeon and founder of Aventura Orthopaedics and Sports Medicine in North Miami and Miami Beach, was identified due to a metal nametag emblazoned as follows: “From: Rabbi A. D. Davis, Children’s Town, Jerusalem, Israel.” Rescuers reached out to none other than Rabbi Aharon Dovid Davis in Israel, who hastily stated that the plaque was gifted with an appreciation bearing this tag following a commitment to support two youths from the Children’s Town. Dr. Cohen is survived by his wife Soraya and their two teens, Elisheva and Avi, of Bay Harbor, Florida, along with his parents.

Cohen had been visiting his aging parents earlier on the evening of the collapse and had been staying at an apartment with his brother, Dr. Tzvi Nosson HaKohen (Gary) Cohen a”h, 58, a practicing physiatrist of over twenty years, who resided in Mountain Brook near Birmingham, Alabama. This family’s story is remarkable in that Brad found a religious calling while in medical school and soon immersed himself in the study of Torah under the direction of Rabbi Yakov Saacks of the Jewish Chai Center in his hometown of Dix Hills, New York. This soon translated into him building a Torah home and bring both his brother Gary and their parents, Morton and Deborah Cohen, into the Jewish religious circle. Brad became a regular mispallel at the Shul of Bal Harbour and established a rapport with Rabbi Sholom Lipskar. His son Avi was in Israel at the time of the collapse and returned to be with his family during the month wait that followed. His daughter Elisheva was seen in a widely circulated photo saying T’hilim at the site. Her actions deeply impacted Surfside’s mayor, Charles Burkett. Dr. Gary, who continued his religious education under Rabbi Yossi Friedman of Alabama’s Chabad, is survived by his Shabbos-observant wife Mindy and their sons Jared and Seth.

Judy Spiegel a”h, 65, originally of South Bellview and later Plainview, Long Island, built a life surrounding philanthropic efforts like the interior beautifications of hospitals. She retired early from a career as a stockbroker for Merrill Lynch, and stood at the helm of her family alongside her husband Kevin and their three children and grandchildren. She was a friendly person who went above and beyond to care for others, and spent as much time as possible with family. Judy was also quite involved with Holocaust survivor Eva Schloss and her outreach and education efforts as well as June Scobee Rodgers, whose husband, Challenge Space Shuttle Commander Dick Scobee, perished in the 1986 disaster. Judy’s husband, who also grew up on Long Island, was away on business on the West Coast during the collapse and returned immediately to be with his family. Judy had a passion for Broadway and Disney World and had plans to visit both. The couple, who only moved to Surfside in 2017, previously lived in Ohio, and dedicated time to Southampton Hospital’s Ellen Hermanson Breast Center on Long Island, where they were involved with the local Chabad. Judy is survived by her husband and their children Rachel, Josh, and another child.

May we know no more sorrow.