In the tight, open-seat race for Queens Borough President, the Jewish vote has been sought by all the candidates, as they address anti-Semitism, tout their pro-Israel advocacy, and speak of issues that matter to the community. Former Middle Village Councilwoman Elizabeth Crowley, 42, is well-known among Jewish community leaders and activists, and this past Sunday she spoke at the Young Israel of Kew Gardens Hills on her qualifications for leading The World’s Borough. 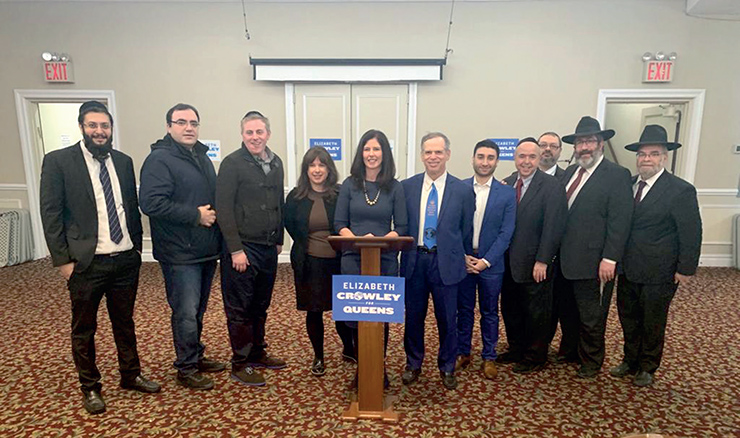 “Certainly among the leading candidates, I am the only one saying that it needs significant reform,” Crowley said of the recently enacted abolition of cash bail for many offenses, including crimes of physical violence, property damage, and expressions of hate. “I’ve called the governor about restoring bail to hate crimes.”

Bail reform is up to state lawmakers, but in a Democratic Party where leftist voices appear to have the momentum, a win by a moderate would slow the rush to reform and demonstrate the unease of voters towards recent laws that took the power of setting bail away from judges. What the Borough President can do is to contribute towards the borough’s future by appointing Community Board members, distributing funds to community nonprofits and capital projects, and establishing panels to study and discuss topics of importance. “I will support public safety, transportation, and access to my office,” Crowley said.

Unlike many elected officials, Crowley does not have a law degree, but she was born into a family that was deeply involved in the Elmhurst civic scene, and the Queens Democratic Party. She was the 14th out of 15 children born to Mary and Walter Crowley. Her father was the party’s District Leader who was elected to the City Council. His career abruptly ended with his death in 1985 at age 53. “My mother raised us on her own and with the greater community.” Pursuing her love of art, she graduated with a degree in art restoration, working on landmark buildings across the city. 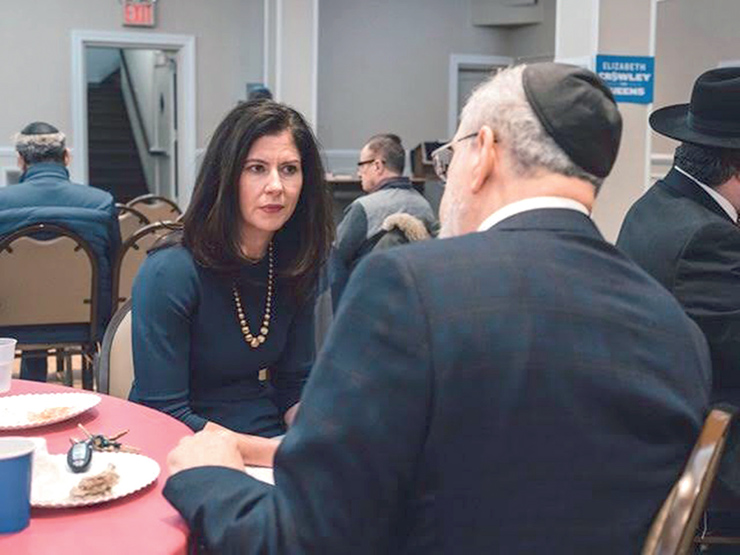 “I redid the motifs of the Central Synagogue in Manhattan after it suffered a fire.” It was a union job and she was an active participant in DC9 meetings. She then returned to college for a degree in urban planning from the Pratt Institute’s graduate architecture school. Crowley mentions this background as a qualification for the job she seeks, as the Borough President weighs concerns between neighborhood preservation, traffic congestion, and accommodating population growth with affordable housing and expanded transportation options.

In her old Council district, the Lower Montauk Branch runs a few freight trains each week, but it hasn’t seen passenger service since 1998. Crowley has been an outspoken advocate for reviving service on this line and transforming properties along its route. “Rezone M1 areas along this line for residential. Build Queens more efficiently,” she said. The biggest railroad property in Queens is Sunnyside Yard, at nearly 300 acres, which the city plans to cover with a deck in the manner of Hudson Yards. Crowley argued that the cost of developing Sunnyside Yard is too high in comparison to rezoning manufacturing sites along the Lower Montauk Branch. She noted that the train and subway lines running past Sunnyside Yard are very crowded and would not be able to accommodate a new station with thousands of new passengers.

On her Jewish bona fides, Crowley’s poster for the meeting proposed a task force on anti-Semitism after she is elected Borough President: “To build tolerance and stem the tide of hate.” She spoke of her past visits to Israel not only as an elected official, but also later as a private citizen. She noted her past support for Jewish nonprofits such as Chazaq and the Kehilat Sephardim pantry, which she would continue to do as Borough President.

Crowley also promises that as Borough President she will study opportunities for further development of economic ties between the borough and the Jewish state, citing the partnership of Cornell University and Technion on Roosevelt Island as an example. “I will identify the sectors that create jobs.”

The Special Election for Queens Borough President is on Tuesday, March 24, but the winner will only get to serve the remainder of the previous Borough President’s term until the end of the year. This means that Crowley must collect petitions again for the Democratic Primary in June, and then run for the third time in the November general election. Certainly the person who runs for this job must really want it.

David Reich, a longtime community activist and former president of the Young Israel of Kew Gardens Hills, described Crowley as someone who is “sincere, knows the issues, and is level-headed.”

Shalom Zirkiev and David Mordukhaev of the Alliance of Bukharian Americans came to hear Crowley’s pitch and also regard her as responsive and knowledgeable about the Jewish community’s needs. Without making an endorsement, Zirkiev noted that with all the attention that candidates have been giving to the community, everyone who can vote should do so, to demonstrate that this is a community that truly counts in an election.

There are six other candidates running for this position: Councilman Donovan Richards, Councilman Costa Constantinides, Anthony Miranda, Daniel Maio, James Quinn, and Dao Yin. Last week, Councilman Jimmy Van Bramer dropped out of the race, citing family-related reasons. Should Crowley win, it would make for a historic record, as she would be the fourth woman in a row to hold the same elected office – and what better place than in Queens!