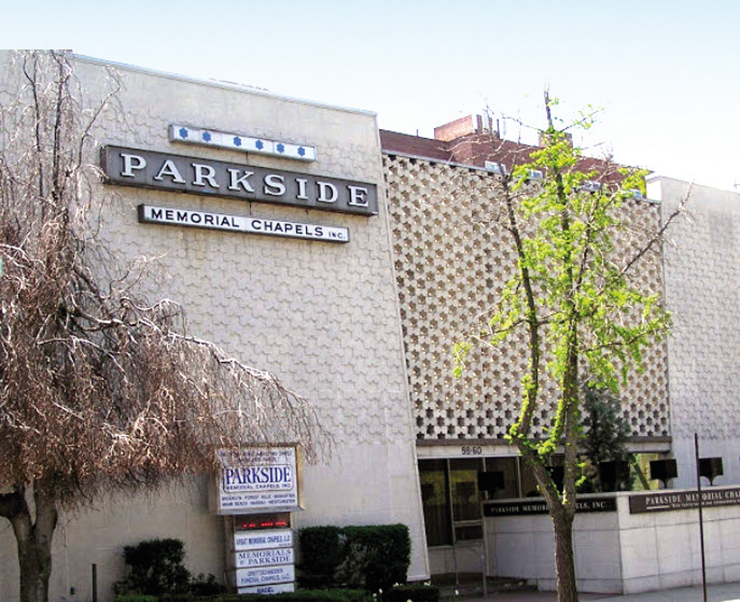 The block of Queens Boulevard between 65th and 66th Avenues in Rego Park has been an anomaly for decades, with its single-story storefronts rather than towers befitting of a major traffic artery. In the past year, one such business that will likely be replaced with a high-rise is Parkside Memorial Chapels, which has been serving the funeral needs of many Jews in Queens since 1961.

One does not pay close attention to the funeral industry unless there is a death in the family. Certainly the pandemic heightened public awareness of the health risks that funeral workers take to perform their roles. Driving on Queens Boulevard past the modernist chapel with its Jewish stars pattern on the facade, one would not have known that last March the family-owned business was purchased by Service Corporation International and merged with its nearby affiliate, Schwartz Brothers-Jeffer Memorial Chapels in Forest Hills.

“Even though I do not understand all the history of its religious artifacts, I was impressed with its unique architecture characteristics, especially the facades,” wrote Forest Hills resident Donghui Zang, a candidate in the race for City Council in that neighborhood.

Having mourned for both of my parents, an uncle, and an aunt at this facility, I also felt a familiarity with its appearance and an appreciation of its design. Architectural historian Frampton Tolbert, who runs the website Queens Modern, noted its unique features. In 2018, he gave a walking tour on Queens Boulevard that was organized by neighborhood historian Michael H. Perlman, pointing out a dozen modernist buildings in Rego Park and Forest Hills.

“Parkside Memorial Chapels was designed in 1961 by Viennese architect Henry Sandig, who worked for the notable firm Emory Roth & Sons,” Tolbert said on the tour. “This is his most notable work. Most other works listed in the AIA Guide are no longer extant, but this one is pretty unusual, consisting of star-patterned walls and concrete screens. There is a striking metal sculptural fountain near the entrance, and the design of the building is supposed to represent the Sinai Desert, according to their website.” It was founded by Jack S. Garlick, a pioneer in New York’s Jewish funeral home industry, and his partner Larry Goldstein, who passed the business to his son and grandsons.

“The discussion has been going on for a while. We’ve purchased their pre-paid funerals. The Goldsteins are employed by our company. The Parkside building has not been sold,” said Jennifer Martin, a funeral director at Schwartz Brothers-Jeffer.

The last president of Parkside, David E. Goldstein, said that the Rego Park location was not financially sustainable for a Jewish funeral home. “We were once the second largest Jewish funeral home in New York. Rego Park was 80 to 90 percent Jewish when Parkside was built, and today it’s around 40 percent,” he said. “It’s the demographics. We could not cover our costs with the union and the parking lot.”

“Cremation services were never an option, and non-Jewish funerals are not part of our heritage.” Goldstein added that, as neighborhood demographics are concerned, his firm also had a funeral home on Jerome Avenue in the Bronx, which operated through 1983. Although the spike in deaths last spring brought more business to funeral homes nationwide, the numbers have since dipped closer to the average rate.

“I was shocked that it closed. I was inspired by its facade offering a modernist twist on traditional elements. It is an early example of modernism in Queens, and an outstanding example for American preservation,” Perlman said. “I don’t want Rego Park to become Anytown, USA. Our community is distinguished in many ways.”

Perlman would like to see the building preserved and creatively reused without destroying its unique exterior. Having seen its lobby, he noted that it contained an earlier artifact of New York’s Jewish history, a piece of stained-glass window salvaged from an 1850s Lower East Side synagogue. Between the lobby and the star-studded exterior wall is a cascading sculptural fountain.

The funeral home has a close relationship with Congregation Machane Chodosh, which I attended when I lived in Forest Hills. “My hunch is that funeral homes are an American Jewish invention,” said Rabbi Yossi Mendelson, the mara d’asra of this shul. “In Venice, the aron would be transported down the street of the Jewish ghetto on its way to burial.”

I asked him about the unique role of this building. For a shul is the beis t’filah, beis k’neses, and beis midrash at the same time; and schools have also hosted prayer services, theatrical performances, weddings, and community forums. But the sizable hall of a funeral home typically hosts only one thing – the funeral.

“Traditionally, funeral homes are associated with sadness; it’s not a place to celebrate, but before COVID we were doing a lot of things like a CPR class, an author speaking, a genealogist, and other community events,” Martin said. “These things were positive and educational. We planned a health and wellness fair and a blood drive, maximizing our space to benefit the community.”

Schwartz Brothers-Jeffer Memorial Chapels also has a room for abbreviated catered shiv’ah meetings. “When people visit from another state, they can sit shiv’ah here and it was well-received.”

Perhaps it is the presence of bodies in the basement that makes the entire building problematic in regard to tum’ah, or from a secular viewpoint, a sense of discomfort in holding an event in the same space where the dead are memorialized.

Author Allan Amanik offers a detailed history of this industry in his 2019 book, Dust to Dust: A History of Jewish Death and Burial in New York. He writes that the period when Parkside and Schwartz Brothers were built represented a transition among the region’s Jews.

Younger generations no longer had interest in maintaining landsmanshaftn that used to collect dues, maintain burial plots, and conduct funeral rituals. Many Jews were leaving observance but still sought to maintain some degree of tradition in their lives, and not all synagogues had a chevrah kadisha and burial plots that were once as standard as a kiddush committee or a youth group. The funeral home entered this void in transporting the body from its place of death to its final resting place, coordinating with family members, burial societies, and cemeteries. It conducted the process in accordance with halachah, if requested by the family.

Schwartz Brothers was built a decade before Parkside, with a similar structure, where the rituals of taharah take place in the basement, a sizable hall with ample seating hosts mourners, and subtle signs of Judaism decorate the building. They’re visible, but not in a way that would distract from the ceremony taking place – likewise with the plants, curtain colors, and other interior features. Sinai Chapels in Fresh Meadows is also a product of the 1950s, with its location next to a highway that makes for a convenient last trip either to the cemeteries of the city or on Long Island.

As the most observant individual in my extended family of cousins, uncles, aunts, second cousins, third cousins, and beyond, I’ve often assisted in the mitzvah shel emes, in partnership with the funeral home, and Rabbi Eli Blokh of the Chabad of Rego Park.

Our people are eternal, but diaspora neighborhoods do not remain Jewish forever. Death comes to all living creatures, but funeral homes are not an eternal business; in fact, they are a relatively recent concept. What we truly wish to be eternal are not the buildings where we lived, learned, or worked, and certainly not those where our remains are stored for a few hours.

My most recent family funeral at Parkside took place in the summer of 2019, when my grandmother’s cousin-in-law died. Sounds distant, but my family is like an extended tribe, and he was like a grandparent to me. The family expected me to deliver a hesped but I decided not to. The mesader selected by the family was a total stranger, and knowing nearly nothing of the deceased individual, he waxed poetically about life and death. The speech was so lengthy that I did not want the widow to suffer through additional speeches. As she followed the aron out of the Parkside building, she asked me why I did not speak.

“The words you’ve heard about your husband at this chapel are not the last words you’ll be hearing. Chas v’shalom! As you sit shiv’ah, mark shloshim, and observe the yahrzeit, more people will be sharing their memories with you. That’s what really counts. The lasting memory of a person.”