A standing-room-only crowd of community women packed Congregation Ahavas Yisroel on Motza’ei Shabbos, November 30, to hear Rebbetzin Tziporah Heller speak about Chanukah. Her theme was how to light up your life, bringing light to ourselves and others.

She began by stating: “Time is the progression of change. Hashem created the world so we could measure time.” As the year progresses, the amount of daylight changes. The month of Kislev is when days grow shorter and there is more darkness. The world, she taught, is inherently dark. In B’reishis, it states that Hashem said, “Let there be light.” We see that darkness was first. “Look at today’s world. It’s not ordered or clear. It seems very chaotic and this is part of Hashem’s plan.” We are in darkness now. She explained that each of the words in the pasuk in B’reishis that describes the world before there was light describes a different exile. Exile means forces that keep you from seeing your own light. Exile put us in a situation where we didn’t know our own national identity. “To discover who you are, you have to discover who you aren’t and who you don’t want to be.” She then detailed this idea. “Tohu” refers to the exile of Bavel. We had asked for a king so we could be like other nations. This was the wrong intention for having a king. We didn’t want to be like ourselves. The root of the Hebrew word bavel means confusion. She pointed out that there is no other nation in the world that maintained itself without a land. Next is vohu, which refers to the exile after Persia conquered Bavel. This is when the Purim story took place, she explained, and this is a different exile, which entails luxury and beauty. This exile affected us emotionally. She posed the question, “How can beauty and luxury be evil?” She then taught that if you dismiss its relationship to its source, then it is evil. Ascetic beauty separated from G-d is evil. You need morality with beauty, and this is a problem we have in today’s world.

In the next exile, we were in the Land of Israel, but we were not out of exile intellectually. Choshech, the next word, refers to exile of the intellect. Our thoughts were the thoughts of the Greeks. They believed in a human-centered universe where humans determine morality. In today’s society, people do not believe in absolute right and wrong. In fact, she pointed out that the three gravest sins – of idolatry, murder, and sexual immorality – are all accepted in this type of society. She shared a disturbing example of how, recently, doctors allowed a 99-year-old man who was on hospice to be essentially murdered by being given too much pain medication, and there was no way to take legal action. Also, today you can’t say that a certain religion is idolatrous. In addition, in terms of sexual morality, there is no concept of this in our society today. “In a human-centered society, there is no morality.” This is when the Chanukah story happened. We were in Israel but we were in galus. The Maccabee rebellion was about spiritual values fighting rational thought in a human-centered universe. She added, “This is where we are today in a human-centered society.” The Greek symbol was the Olympic torch, while the Jewish symbol of that time was its darkness. The Greek view took the spiritual light out of the picture. Rebbetzin Heller asked rhetorically, “How many of us are unaffected by the Greek way of thinking?” She lamented that we are all affected by it.

So, how do we discover light? The original light was not a physical light. We know this because the Sun and the Moon were created later – on the Fourth Day. A spiritual light is hard to define because it is a manifestation of Hashem Himself. She then explained that any act of chesed that touches you is a spiritual light. “Some chesed is above human capacity.” You receive this light when you do an act of chesed. Also, when we do an act where we conquer our self-interest, this also brings spiritual light.

She continued. Avraham’s chesed comes from love of light. Yitzchak’s midah of g’vurah also brings spiritual light. In the Chanukah story, we were fighting for light. The Syrian-Greeks would never understand this light. The Maccabees were fighting for mitzvos that require chesed and g’vurah.

She then connected these ideas to Shir HaShirim. The kisses of the mouth in Shir HaShirim refer to Hashem’s kisses in the form of two commandments: the kiss of connection and the kiss of exclusiveness. In other words, I love you and I love only you. These kisses are something the Syrian-Greeks could not understand and this is what the Maccabees were fighting to uphold. She noted that we all have this light in us. “This original light is hidden in the heart of every Jew and is the reason every Jew can respond to Torah.”

She explained that the argument of Hillel and Shamai over whether to add more lights each night or to start with many and slowly decrease them each night of Chanukah was really an argument over the nature of miracles. Hillel believed that you bring a little bit of light (connection) into a place of darkness, and this can bring more and more light. We go up until the number eight, which symbolizes going beyond nature.

Avraham was hospitable because he wanted to bring light into the world. A problem we have is that we don’t value what we do. Acts of chesed are transient but the light doesn’t fade. In this world, we don’t see this, but we can see it through emunah. “It’s beyond rationality. The more emunah you have, the more you can see the power of good. Emunah is knowing that all comes from one source.” Emunah helps you see Hashem’s chesed and some light comes forth. This is the reason the Syrian-Greeks forbade Shabbos, bris milah, Rosh Chodesh, and other mitzvos. They didn’t want us to do anything that could take us beyond the reach of rationality.

She pointed out that when you perform an act of spiritual courage, you feel that light, and that root is m’siras nefesh. It takes you higher than rationality. So, the two keys to being a person of light are emunah and m’siras nefesh.

How do we cultivate emunah? She taught that we do this by attributing things to Hashem. The more we see Hashem giving to us, the more we will want to give to Hashem. Appreciation of what we have, making note of each thing, brings Hashem into the world. Saying no to what separates us from Hashem – like media, how we use the power of speech, and what we do with our money – can all involve m’siras nefesh.

In summary, chesed, g’vurah, emunah, and m’siras nefesh are all ways to bring light into our lives. We bring this light to others by example. We have to know that the potential of light is in the heart of every Jew. “You have to be a person of emunah with pride and consistency to bring others to the light.”

Everyone left inspired by this beautiful shiur. The community is grateful for all the amazing shiurim hosted by Congregation Ahavas Yisroel.

The Greatness Of The Avos 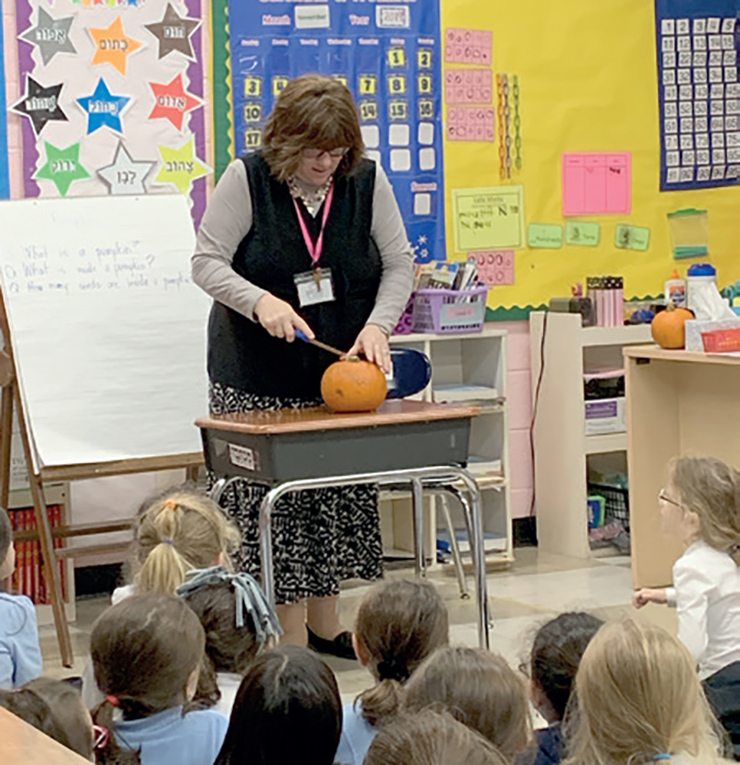