The bar mitzvah marks a new stage in the life of a Jewish boy, taking him from a minor to an adult, with responsibilities to shoulder for the remainder of his life. 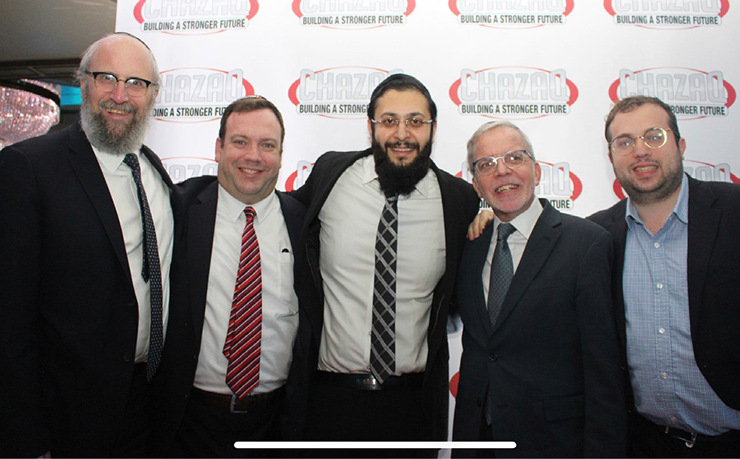 On Wednesday, December 4, the Chazaq organization celebrated its 13-year anniversary with a Gala Dinner at the Leonard’s Palazzo in Great Neck, telling the capacity audience: “Now we will take upon ourselves greater responsibilities to take the community to even greater heights.”

The beautiful event formally began at 6:30 p.m. for the guests, but a few hours earlier for the Chazaq staff members who came to set up. Guests were welcomed at the main hall by Chazaq’s warm staff to a beautifully adorned hall. One really gets a sense of the positive morale shared by the Chazaq team by seeing their inspired work. Chazaq CEO, R’ Yaniv Meirov, was all over the place, directing guests, socializing, and generally infecting everyone with his contagious smile. The mood of the event was congenial, due to the camaraderie of the participants.

The event began in the side hall with a delicious smorgasbord, which surely whet everyone’s appetite. During this time, the main hall was abuzz as the night’s entertainers prepared. The slated singers included Chaim Mayesz and several surprise guests. 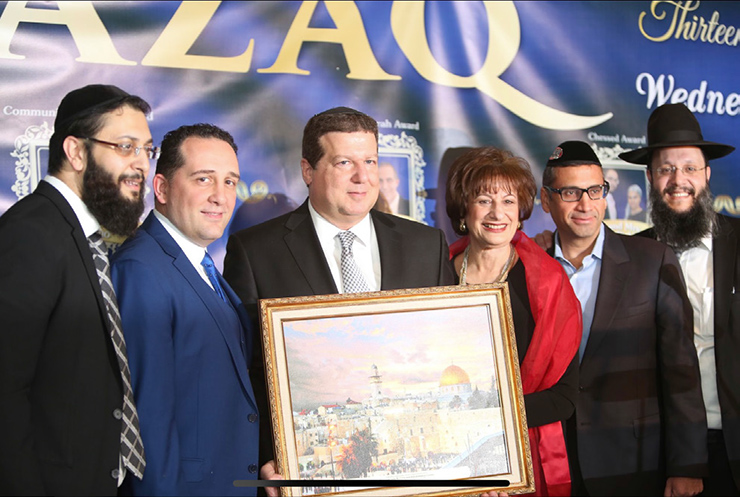 At 7:30 p.m., the guests were invited into the main hall for the night’s formal dinner. The tables and chairs were elegantly arranged for the occasion, and the hundreds of guests took their seats. Meirov took the microphone to welcome everyone and thanked all the guests for their demonstrable support for all of Chazaq’s work. He then turned attention to the focus of the night, the Dinner’s esteemed honorees.

The first award was presented to Margaret Tietz Nursing & Rehabilitation Center. Meirov spoke of their extraordinary service for the community since the early 1970s and how they are constantly improving and reaching new heights. Meirov presented them the prestigious Community Service Award and was joined on stage by Mr. Shalom Zirkiev and Mr. Ben Yunatanov, two esteemed members of Chazaq’s board of directors, to present the heads of Margaret Tietz with the award.

The next award was presented to Mr. & Mrs. Mickey Aboff for their genuine dedication to Jewish causes, especially in West Hempstead, where they started a branch of Chazaq in their community. Their son Robbie was given the “Mr. Chazaq” coffee mug from Meirov, earning him this distinguished title for all his hard work in being Chazaq’s Events Coordinator, inspiring thousands throughout the year.

Mr. & Mrs. Avraham Pinchasov received the Pillar of Chesed Award for their genuine support to Chazaq’s cause of inspiring Jewish children in the Public School system. In a similar vein, Mr. & Mrs. Robert Koptiev were awarded the Youth Leadership Award for their continued efforts towards various community programs that serve our youth. 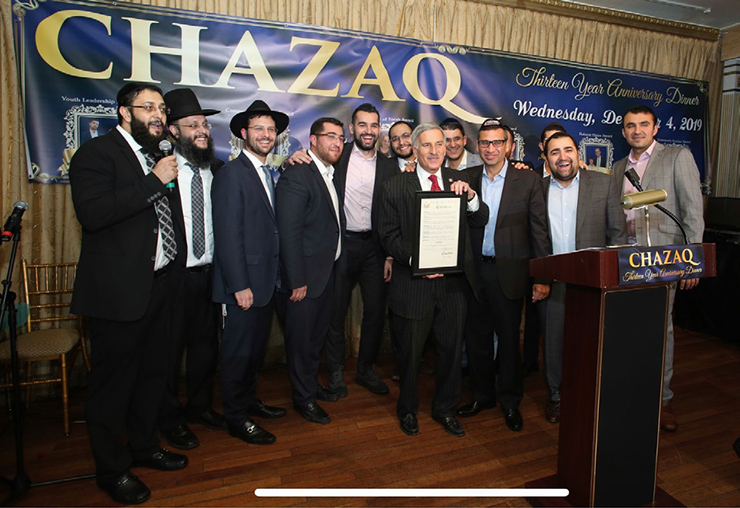 Mr. & Mrs. Mark Plaine received the Hakarat HaTov Award for their support of Chazaq for nearly a decade. Finally, Rabbi Tomer and Mrs. Zino were awarded the Community Builder Award for their tremendous dedication to the community. Rebbetzin Zino has been a popular director of Chazaq’s Jwave Teens Division for Girls, inspiring scores of girls to change every year. Rabbi Zino is a rabbinical student at Chazaq’s kollel and rabbi of the Tiferet Shalom minyan.

The night progressed wonderfully. The guests were treated to beautiful music performances by the Bukharian Boys Choir and a surprise appearance by Tal Vaknin, who joined Chaim Mayesz in electrifying the audience with their music.

After the awards ceremony concluded, the crowd learned about some of Chazaq’s life-changing programs. “Over 15,000 different people came to Chazaq lectures, not in the last 13 years, rather in the last 12 months alone,” said Meirov. “In addition, Chazaq touched the lives of over 1,250 public school students in the last year alone, guiding 258 of them to a yeshivah setting.”

“In the last three years, Chazaq has guided over 800 public school students to attend yeshivah,” said Meirov to a rousing ovation by the capacity crowd.

Charlie Harary was the guest speaker at the event, sharing powerful anecdotes in defining a true leader. In doing so, he expressed his personal feelings about the Chazaq staff who, he said, “give their heart and soul in order to inspire and assist anyone who comes their way.” 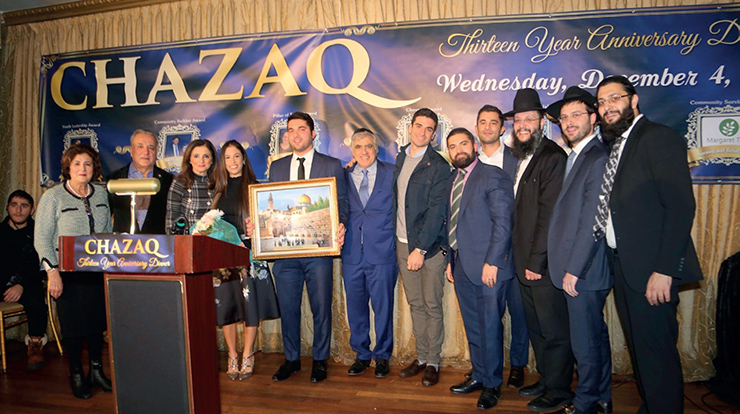 Many distinguished rabbanim, community leaders, and elected officials made a special appearance to show their gratitude for Chazaq’s great work in the community, offering their blessings for many more years of continued success.

By the end of the event, it was clear that Chazaq had the continued support of its guests. The guests left the hall knowing that Chazaq will continue to address the community’s many needs and innovate programs to advance everyone to the next level. If they have accomplished so much before their bar mitzvah, could you imagine what they will, G-d willing, accomplish afterwards? With a united effort, the sky’s the limit.