Tuesday, July 15, seemed like any other Tuesday at the eight a.m. Shacharis minyan at the Young Israel of Hillcrest. But this day held a special significance. On this day, Mr. Aron Beidner was to celebrate his 102nd birthday – only he had no idea that a celebration was about to take place after davening. I only found out about this special birthday because our chief gabbai, Yossi Lebovitch, told me so the day before. 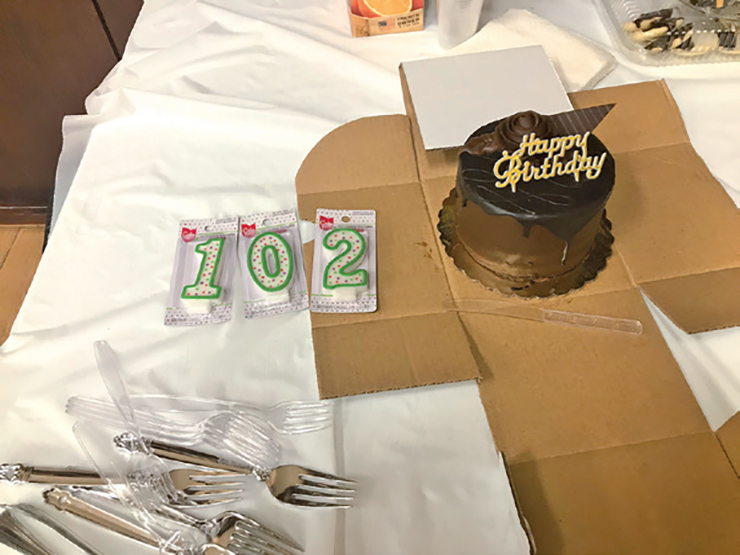 So that night, I purchased a cake from Aron’s, and put it out on the table Tuesday morning. As usual, Mr. Beidner walked in quickly, took a quick look at the cake, and prepared for davening as usual. After we finished Shacharis, I asked the minyan to please stay a few minutes so we could celebrate this special birthday with Mr. Beidner. He actually did not hear my announcement and was about to leave, so I took his talis bag, put in on the table, and slowly walked him to the table where the cake was. We all huddled around him and sang him a very happy birthday, until mei’ah v’esrim shanah. Baruch Hashem, he is on his way.

We all, in the minyan, feel a great z’chus davening every day with Mr. Beidner. A great yasher koach goes to his daughter Irene who brings him every morning and takes him home. Kudos also go to his son-in-law Stephen, who brings him to Minchah every day.

In closing, I would like to make one observation about Mr. Beidner: What also amazes me is not only his longevity, baruch Hashem, but that he walks faster than 75 percent of the minyan attendees.