To play a fool on screen usually takes talent, but apparently for actor Seth Rogen, the persona isn’t much of an act, after hearing how little he knows about the history of Israel and his Jewish heritage.

“To me it just seems very like an antiquated thought process. If it is for religious reasons, I don’t agree with it, because I think religion is silly. If it is for truly the preservation of Jewish people, it makes no sense,” he said in an interview last week with comedian Marc Maron. He was promoting his film An American Pickle and offered his take of Jewish life. “You don’t keep something you’re trying to preserve all in one place, especially when that place has proven to be pretty volatile.”

From his comfortable childhood in Vancouver, Rogen did not experience the physical hardship of being a Jew, while his coreligionists in Ethiopia suffered under a crushing famine, or Soviet Jews who suffered discrimination for expressing their faith and desire to emigrate, among other examples. Rogen asserted that placing all Jews in one place would make it easier to exterminate them, and perhaps the dispersal of Jews is the key to Jewish survival.

An American Pickle is Rogen’s Jewish version of Washington Irving’s Rip Van Winkle, a character from the past who falls into a deep sleep and awakens decades later to an unrecognizable society. The protagonist, Herschel Greenbaum, is an immigrant from the shtetl, a stand-in for Tevye the Milkman with his beard, Yiddish proverbs, and simple faith. Greenbaum awakens in a post-industrial Brooklyn where the pickle factory where his life was suspended becomes a performance space, and his great-grandson Ben is a computer programmer. 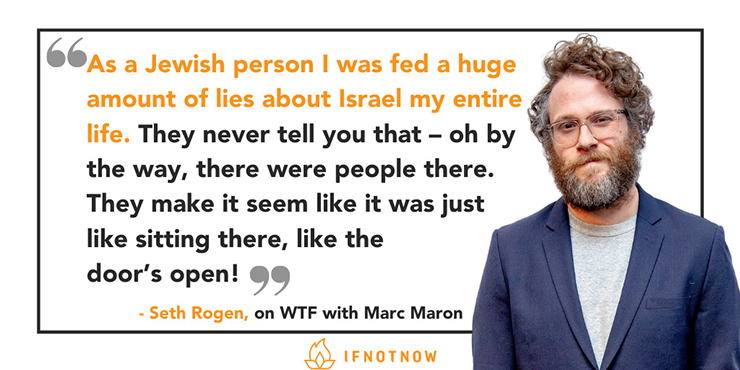 But if Herschel is experiencing culture shock with the Brooklyn of this century, Ben can take his ancestor to Williamsburg or Borough Park, where Yiddish is still spoken today. The culture shock for Herschel would be seeing Orthodox Jews living comfortably rather than scraping by from one job to another as a result of their keeping Shabbos.

Perhaps Ben Greenbaum shares Rogen’s ambivalence on Judaism, Zionism, and intermarriage, but Herschel’s experience of poverty and persecution did not dissolve in a pickle vat or the post-Holocaust creation of the United Nations. In Rogen’s lifetime, Israel has been a haven for Jews from Ethiopia who fled from a famine under a communist dictatorship, and Soviet Jews who suffered discrimination for expressing their culture, faith, and desire to emigrate. These olim learned Hebrew, made career adjustments, defended their old-new homeland against terrorism, and learned about religious observance. Their experiences demonstrated the necessity of the Jewish state.

Fortunately, last month’s outbursts from Rogen and Peter Beinart can be balanced by rapper Ice Cube’s unexpected conversation with Zionist Organization of America President Mort Klein, and Nick Cannon picking up a copy of Bari Weiss’ book How to Fight Anti-Semitism. Jewish leftists were infuriated to see these two black celebrities atoning for their anti-Semitic statements by connecting with Jewish activists who understand the necessity of the Jewish state, recognize anti-Semitism in this century, and respect religious observance.

In too many instances, it is the progressive Jews who are active in interfaith and interracial conversations, where they apologize for Israel defending itself and promote a Judaism that reflects their progressive politics rather than halachah. They speak only for themselves. Their self-abasement does not make the Jews of Israel and Old-World countries any safer.

Fortunately, opinion leaders in politics, entertainment, and culture are beginning to pay more attention to Jews who are comfortable with Judaism and Zionism and can speak with confidence about their experiences, the Jewish state, Jewish observance, and continuity.