It is only the beginning of 2020, and already within the span of the first five days of the new year, the Jewish community saw what could possibly be the two most widely attended Jewish events of the year. First, on New Year’s Day, 90,000+ people packed into frigid MetLife Stadium in East Rutherford, New Jersey, to celebrate the completion of the Daf Yomi. The following Sunday, on January 5, an estimated 25,000 people braved the cold to march across the Brooklyn Bridge in protest of the ever-increasing number of anti-Semitic attacks in the New York Metropolitan area and across the country.

It is obvious that these events are vastly different in tone and tenor. The Siyum HaShas was a tremendous celebration of the culmination of seven and a half years of work by groups and individuals around the world. The mood of the day was festive and congratulatory, and the only calls to action were millions of people around the globe, either reaffirming their previous commitments to complete Shas over the next cycle or beginning their own for the first time. On the other hand, the solidarity march mood began as somber, and morphed into rousing support and solidarity for the Jewish community. Here, the call to action was towards politicians and corporations to change their policies to expel anti-Semitism from their parties and platforms.

These differences were to be expected. In fact, according to Leah Zagelbaum, VP for media affairs for Agudath Israel of America, there was a decision made to limit the attention given to the recent attacks on the Jewish community as it would unfortunately detract for the tremendous simchah of the day. However, there is a much deeper and more significant difference between these two events. That difference is the attendees. It was obvious to anyone in attendance at either event just who each one was “for.” In MetLife, you saw a crowd made up of almost entirely Orthodox Jews. The range was basically Modern Orthodox to chasidish. Few (if any) members of Conservative, Reform, Reconstructionist, or any other sect Left-of-Modern could be seen in the stadium. On the other side, the attendees of the No Hate, No Fear March were vastly different. According to the President of the Union for Reform Judaism, Rabbi Rick Jacobs, almost every Reform synagogue in the New York area participated in the event, despite the fact that the vast majority of the attacks in the New York metropolitan area were against the Orthodox, and specifically the chasidic community. 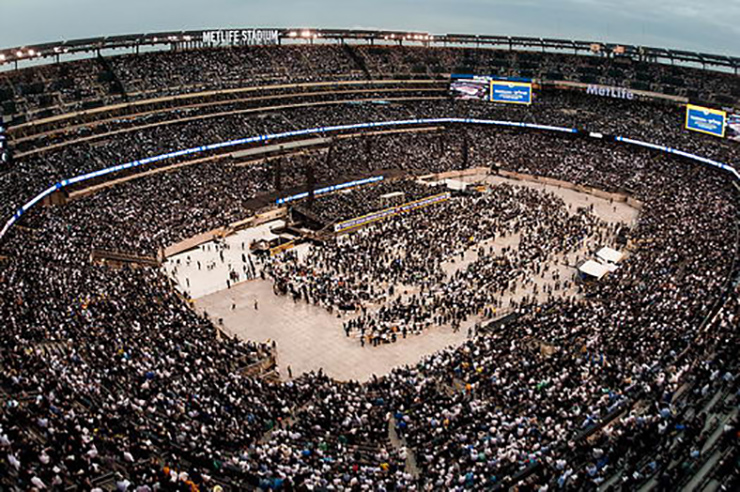 The differences are further shown by the speakers at each event. At the Siyum, the speakers were almost entirely from the yeshivah world, including roshei yeshivah and community leaders. There weren’t any recognizable names left of the yeshivishe community. At the rally following the march, aside from two Lubavitch rabbis saying, “Sh’ma Yisrael, Hashem Elokeinu Hashem Echad,” there was only one representative speaking on behalf of the Ultra-Orthodox, Chaskell Bennett, who made the point that “it is identifiable chasidic and Orthodox Jews who have predominantly been the victims of the anti-Semitic violence we are protesting today,” despite admitting to not being a member of that community himself.

But the divide doesn’t end there. Take a look at the corporate sponsors of each event. Not a single overlap. That’s right, no organization or company decided that both events were worth their support. And the divide was obvious. While the Siyum received sponsorships from Hamodia and Kedem, the March saw sponsorships from the UJA and the JCRC.

Now this is not to say that there were no members of the Ultra-Orthodox community at the rally; they were certainly visible. Likewise, it is not to say that no members of the Conservative or Reform communities didn’t make a siyum on Shas. I have no way of knowing that. Furthermore, there is no way to know which members of either community attended both events, or if sponsors of either event attended the other. But looking around at both crowds, it was painfully obvious what the various sects of Judaism consider important.

If you have been paying attention to the attacks against Jews, both locally and nationally, you will know that the perpetrators are not consistently of one ideology. Attacks come from the political Right and the Political Left, from White Supremacists, and from minorities. These are factions that otherwise hate each other, and here we are, stuck as the uniting factor for both of them – their hatred for us. However, the worst fear I have, following these two events, is that we are not getting the message. We are still divided amongst ourselves. It’s like it is only important to attend events that align with our political or religious level.

Those at the March were fighting for the physical lives of Jews, while those at the Siyum were celebrating the soul of the Jewish people. But I have news for both sides: Neither matters much without the other. If you are not interested in preserving traditional Judaism, why bother fighting for it? Judaism is more than Chanukah presents and bagels. And if you are only interested in the passing down of Torah values to the next generation, what good is that if there isn’t a next generation to pass down to? Some of us value learning Torah over political activism, and some are the other way around; but neither need be at the expense of the other.

It is no longer enough to be a fighter for the soul without the body, or the body without the soul. We need to fight for both. Everyone needs to be on the same page here. Why? Because our enemies are on the same page. Enemies of the Jewish people see us all the same way. They do not care if you wear a sheitel or nothing on your head. They do not care if you wear a kipah s’rugah, a shtreimel, or an extremely stylish grey fedora. They don’t care if you’re Ashkenazi, Sefardi, the Satmar Rebbe, or Adam Sandler. They hate all of us. During the rally after the March, National Director of the ADL Jonathan Greenblatt may have said it best: “I may not be standing here wearing a long coat and a black hat, but those are my Jewish brothers and sisters.” We should all feel the same way.