According to fashion experts through the ages, your white wardrobe has been given permission to be worn starting Memorial Day. Thematic “white party” events are already being organized in The Hamptons, The Berkshires, The Poconos, and other summer-home destinations. White party dresses are being featured in “must have” fashion sections of magazine editorials, social media sites, insta influencers and shop windows.

Back in Emily Post’s era of the 1900s, ‘10s, and ‘20s, the summer season was bracketed by Memorial Day and Labor Day. High society flocked en masse from town house to seaside “cottage” or mountain “cabin” to escape the heat. City clothes were left behind in exchange for lighter, whiter, summer outfits. Fashion code of law has christened white as the official start of warm weather fun in the sun.

Coincidently, or perhaps not, Shavuot falls very closely to Memorial Day weekend, sometimes at the exact same time. The parading of crisp white attire is not only found in this secular start of the season; white clothes actually have a celebratory role in the special holiday of Matan Torah, the receiving the Torah. 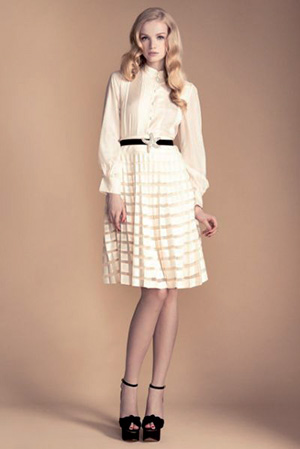 In Israel, the pioneers of the early 20th century who reclaimed the land refocused the meaning of Shavuot with the agricultural aspects of the holiday. In modern Bikkurim festivals, children dressed in white, carried baskets filled of produce from their local villages and kibbutzim (communal farms) in a grand parade. Reading poems, singing, dancing, displaying artwork, which were then sold to benefit the Jewish National Fund (known in Hebrew as Keren Kayemet le-Yisrael, this was the fund created to purchase land from Arab landowners with the aim of settling Jewish pioneers on it), eventually and successfully establishing the State of Israel. Until today, there are festivals similar to these taking place all around the country.

In many Sephardic congregations, prior to the Torah reading on the first day of Shavuot a ketubah l’Shavuot (marriage certificate for Shavuot) is read as a symbolic betrothal of God and His people. The premarital document specifies the conditions agreed upon between the two parties) or the ketubah (certificate the bridegroom presents to the bride at the wedding ceremony). Wearing white is a symbol of the bridal and groom attire symbolic to the marriage G-d makes with the children of Israel during this holiday.

According to Aish TLV Rabbi Shlomo Chen for YNET news, “Wearing white is basically like being an angel. Basically, we’re dressing like angels. We’re returning to Eden, where the same concept of only eating milk products or vegetables and fruits means that we’re all pure.”

He continues to explain the concept of white, “G-d gave us the wisdom of the world through the Torah, and we’re reaching such a spiritual level that we dress in white, like on Yom Kippur. We’re all white, we’re all clean, we’re like angels, there’s nothing that can stop us. The sky is the limit and that’s what we want for this Shavuot.”

I do remember the days of Shavuot at The Concord Hotel in the Catskills of my youth. There was a parade of white outfits going down the makeshift runway that approached the main dining hall. Perhaps that was reminiscent of the younger days in Israel when women wore white on this holiday to find husbands, as many older Israelis recall.

The meaning behind wearing white clothing could be found in the beginning of Eretz Yisrael’s pioneering days, or it could be in the interpretation of wedding outfits as bride and groom receiving the Torah. It also could be just a clean slate of consciousness after 49 days of personal growth from the depths of impurity until the pinnacle of divine purity is reached. Whatever the case may be, white is the height of perfection, which is the meaning of Shavuot: perfection in Hashem’s timing to present us with the Torah as His perfectly chosen people, perhaps dressed in white.