The right side of the Luchos contains the mitzvos bein adam laMakom, but the deeper theme of the right side is mitzvos between man and his source (bein adam laMakor). The first four are bein Adam laMakom, between man and his ultimate source, while the fifth, kibud av va’eim, is between man and his more immediate source, his parents. This juxtaposition reveals a deep connection between these mitzvos: The first step toward tracing oneself back to Hashem is recognizing that I am not my own creator, that I have a source. Kibud av va’eim is the first step toward doing so. Recognizing our parents as our source is the first step in tracing ourselves back to our ancestors, then to Avraham, then to Noach, eventually all the way back to Adam HaRishon, until finally we get back to Hashem Himself. In doing so, we trace our individual existence back to Hashem’s creation of the world itself. Kibud av va’eim is therefore the perfect transition between bein adam laMakom and bein adam la’chaveiro, as this mitzvah serves as the springboard for the connection between you and Hashem. Recognizing that someone created us helps train us to source everything in our lives back to Hashem.

After clarifying why kibud av va’eim is on the right side of the Luchos, we must now explain its connection to the prohibition against jealousy – Lo Sachmod. While some consider the prohibition of Lo Sachmod to only be transgressed when one acts upon his or her thoughts of jealousy, many consider even the thoughts and feelings of jealousy themselves as a violation of this prohibition.

[According to the Sefer HaChinuch and several other opinions, even thoughts of jealousy violate the prohibition of Lo Sachmod, even if one does not act on these thoughts (38, 416). Even the Rambam (Mishneh Torah, G’zeilah 1:9), who suggests that one only violates the prohibition of Lo Sachmod if he acts on his thoughts and forces the owner to give or sell him that which he covets, still thinks that the act is simply a way to quantify the degree to which one had the illicit thoughts and desires of jealousy. In other words, the act is a retroactive revelation of how bad the jealousy truly was.]

How is it possible for us to avoid these thoughts? Given the assumption that we have free will over our thoughts, how are we expected to overcome the urge of jealousy?

Each one of us is entrusted with a unique mission in this world, and Hashem gives each of us the unique talents, skills, and drives that we need in order to fulfill that mission. Hashem is our Source, and therefore the Source of everything we have; every aspect of our life was designed specifically for us. When we understand that every single aspect of our life is given to us in order to help us fulfill our unique purpose, what another person has becomes irrelevant, and jealousy becomes nonsensical. Nothing that somebody else has is necessary for your mission, and you are the only person who is able to fulfill your unique purpose. Hashem not only gave you your mission, but also gave you all the tools you need to achieve your purpose in this world. Instilling this understanding in ourselves allows us to live without any feelings of jealousy, as our full focus becomes directed toward maximizing our time in this world to fulfill our unique potential.

Aside from being jealous of other people’s possessions or circumstances, there is a tendency to be jealous of other people’s successes and achievements. However, the same principle applies here: Nobody else’s successes affect ours, nor should it diminish our self-worth. We are all part of one nation, one people, one team. There is no room for jealousy when we are all working toward a shared mission; on the contrary, we should celebrate each other’s victories as our own! For example, one’s ear would never be jealous of his nose, as they are both parts of the same body. At root, they want what is best for the body, for the collective self. If we viewed ourselves as limbs of the body of klal Yisrael, we would never be jealous of our fellow Jew.

This is what kibud av va’eim teaches us: the importance of tracing everything in our life back to its source, to Hashem. When we realize that our entire existence in this world, and all of the circumstances and challenges that we face, come from Hashem, there is no place for jealousy, as Hashem has given each of us the exact tools we need to succeed in our mission.

Engrave Them on Your Heart

When we picture the Luchos, we instinctively conjure up an image of two rounded tablets. However, the Gemara explicitly states that the Luchos were cubic or rectangular. If so, why does almost every shul depict the Luchos with two rounded tops, as an almost heart-shaped figure? (There are, of course, practical suggestions, including those who suggest that this custom is, in fact, a mistake and is based on non-Jewish artwork.)

Perhaps the depth behind this is that the Luchos are intrinsically connected to the heart. The Aseres HaDibros are the heart of the Torah, and we are told to engrave them into our hearts: “Kasveim al luach libecha” (Mishlei 7:3).

This idea touches upon the unique nature of the Luchos and how they were written. There are four possible ways to record an idea in writing:

The first is to use an adhesive, such as glue, paste, or tape, to attach the message to the medium. This is the weakest form of writing, as the message remains separate from the medium and can easily be erased or removed.

The second is to use ink on paper. In this case, the message is not as easily removed, as the message is more connected to the medium itself. However, the ink still remains on the surface of the paper, separate from the medium (the paper). It is the very contrast between the ink and the blank paper that allows you to understand the message.

However, there is a deeper form of writing, which is to bore the message completely through the medium, whereby the message becomes one with the medium itself.

This fourth level is how the Luchos were written. The pasuk says that the letters of the Luchos were engraved through the stone and could miraculously be read both on the front and the back of the tablets (Sh’mos 32:15). Chazal discuss the miraculous way in which letters such as the samech and mem-sofis both had inner pieces that floated in the air, disconnected from any other part of the stone. 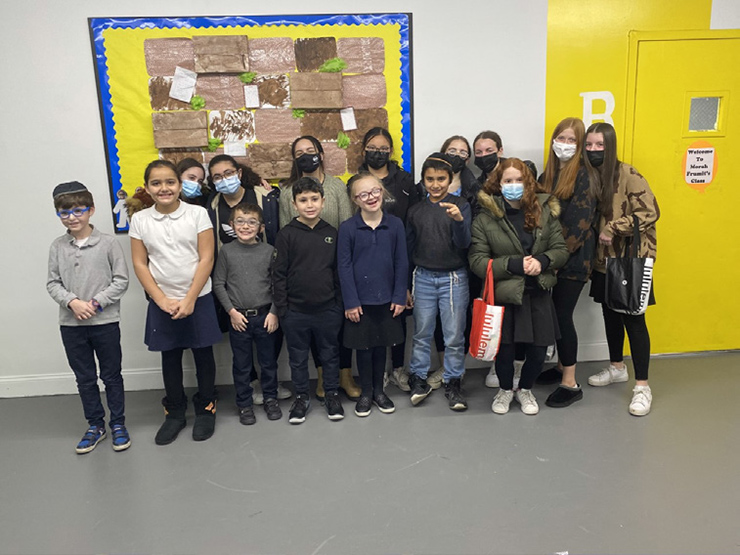