A week after the massive rally against hate that marched across the Brooklyn Bridge, a smaller but equally vocal demonstration took place at MacDonald Park in Forest Hills, put together by young political activists in the Queens Jewish community. “Never did I imagine that in a modern and accepting society that I would be speaking to denounce anti-Semitism in New York City, the most diverse place in the world,” said organizer David Aronov. 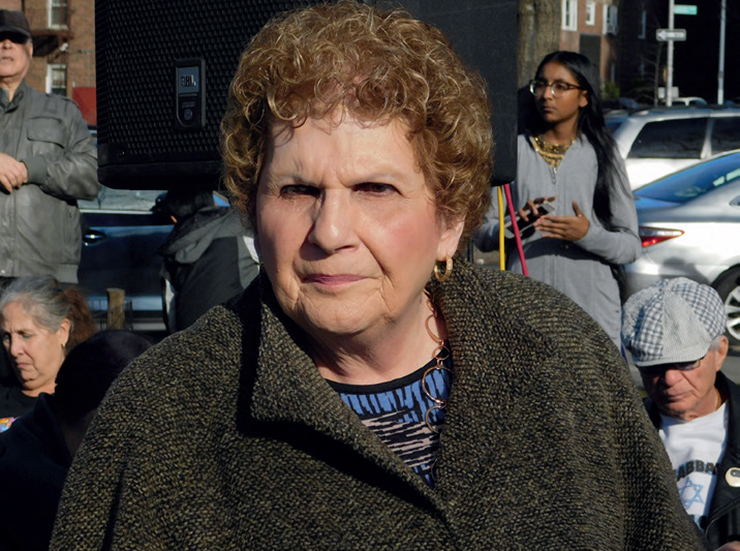 He noted how four years ago, before there was a national conversation on anti-Semitism, an arsonist was burning Bukharian residential construction sites in Forest Hills. “These fires had a common denominator. The homes were all owned by Jews, specifically Bukharian Jews.”

Aronov’s family immigrated to America after his mother, then pregnant with his sister, was assaulted for being a Jew, and told to leave Uzbekistan by the attacker. Since his graduation from high school, Aronov has become fully immersed in public service, in the student governments of Hunter College followed by New York University, as a staffer for Councilwoman Karen Koslowitz, and as a founder of the Bukharian Jewish Union. Presently he is an organizer at the 2020 Queens census team, seeking to maximize participation in the borough’s upcoming headcount.

Aronov’s co-organizer Jeff Kohn lives in Kew Gardens Hills and is the president of the JFK Democratic Club. His grandfather was an Orthodox Jew from Germany who settled in Queens after surviving the Holocaust. “It took Jewish lives in Jersey City, a violent attack on Chanukah in Monsey at a rabbi’s home, leaving several injured, one critically, to finally get those in power to finally admit what we have seen, from Poway to the Tree of Life, all Jews have been victimized by this rising threat,” said Kohn. 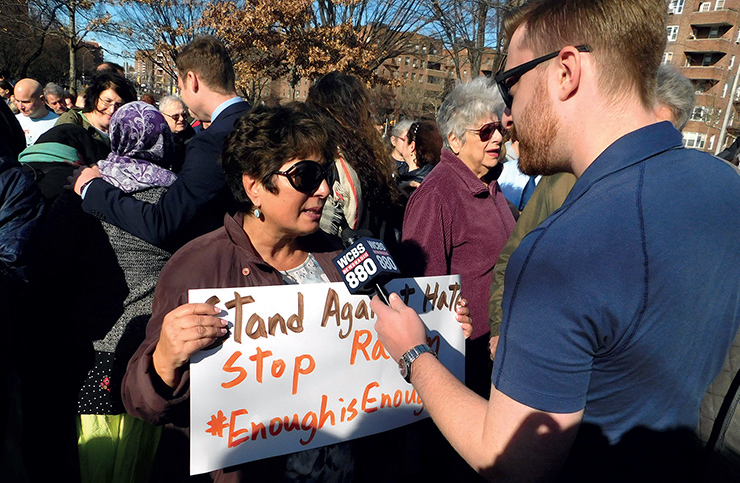 Forest Hills resident and lawyer Ethan Felder, who also helped put the rally together - in less than ten days - acknowledged how many in the crowd have been victims of anti-Semitism and trauma. Felder said in an interview, “I have been, in my activism, I think, made to feel at certain points alienated, isolated, for some of my beliefs and support for Israel… For the first time in my life, growing up as a secular Conservative Jew in Queens, I have become more cognizant and directly feeling anti-Semitism and its complex manifestations.”

Felder said from the podium how he finds hope from President George Washington’s letter to the Jewish community of Newport, Rhode Island: “For happily the Government of the United States, which gives to bigotry no sanction, to persecution no assistance…” From the first Jewish Supreme Court Justice, Louis Brandeis, who said, “Acts of service and kindness to others are both American and Jewish values.” From Rabbi Abraham Joshua Heschel and Jews who marched alongside Martin Luther King from Selma to Montgomery, Alabama, in 1965 for civil rights. From President Harry Truman saying, “I had faith in Israel before it was established. I have faith in Israel now.” “Through the depth of darkness, we have always prevailed,” said Felder, before chanting “Am Yisrael Chai” with the crowd.

Queens Jewish Community Council Executive Director Cynthia Zalisky spoke of her family’s history, as well, noting how her grandfather died at Dachau after dismissing fears of the Nazis’ planned genocide. “I’m a proud American, my parents fought to come here so that I can be free. We must unite and constantly remind the world that we are here to stay.” 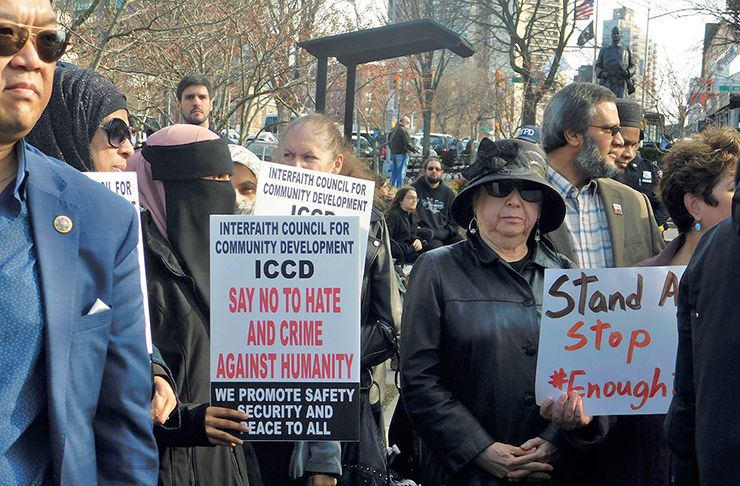 Rabbi Eli Blokh of the Chabad of Rego Park spoke of his family’s immigration to New York in 1980. He noted that, in the Soviet Union, talk of anti-Zionism meant anti-Semitism, and the discrimination that Jews faced for teaching Hebrew and observing their religion. He urged the crowd to wear kippos and install mezuzos. “Now is not the time to hide; now is the time for Jewish pride,” he said.

Rabbi Manes Kogan of Hillcrest Jewish Center drew lessons from Purim: Esther asked “to bring all the Jews together in the capital of Shushan” because they [anti-Semites] “will not discriminate what kind of Jews they are.” Jews “need to be united. We need to build bridges in our community. We need to learn more about them (non-Jews) and they need to learn more about us.”

Adela Cojab spoke about witnessing anti-Israel rhetoric turning physical against a freshman student and an Israeli flag being burned while she was a student at New York University. “We are here because we are all residents of New York City. May this be a testament to our strength and diversity! This is our home and everyone should feel safe in their home.” 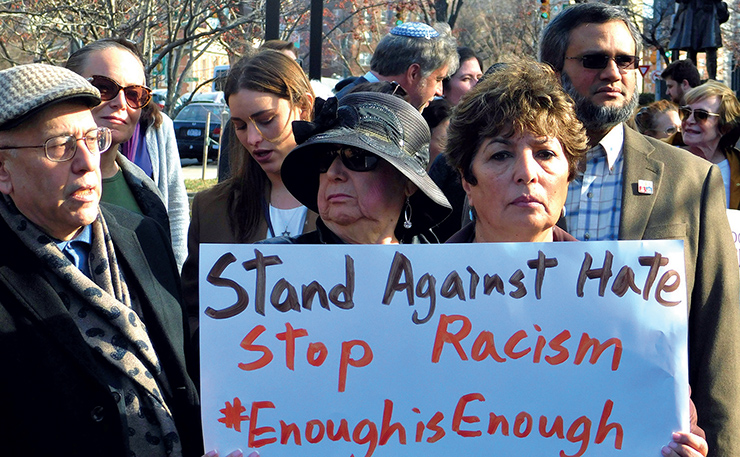 Mazeda Uddin, one of the sponsors of the rally and a founder of the South Asian Fund for Education Scholarship, said in an interview, “If one person is attacked, then all over the world is attacked. We must stop the hate, racism, anti-Semitism, and terrorism. We are not giving up until that day.”

The crowd easily filled MacDonald Park, with sizable contingents from the two nearest synagogues, the Bukharian Jewish Community Center and the Reform Temple of Forest Hills. For theological reasons, Orthodox Jewish leaders rarely appear alongside liberal clergy, but as Rav Yosef Dov Soloveitchik wrote, there are matters of k’lapei chutz – general concern to the Jewish community. When Jews stand together, it strengthens our ability to identify and combat anti-Semitism.

Rabbi David Algaze of Havurat Yisrael, and his Conservative counterpart Rabbi Manes Kogan of the Hillcrest Jewish Center, spoke to each other in Spanish, both having been born in Argentina before ending up in the same borough decades later. Rabbi Kogan spoke of the Purim story, where Esther told the Jews of Shushan to gather as one people. He urged the Jews of Queens to act in the same fashion and recognize one another as members of the same people.

Rabbi Mendy Hecht of the Chabad of Forest Hills North has been a victim of hate three times in the past six months. An African-American female called him a “rich Jew” as she walked past him and his house during Sukkos. A car cut off Rabbi Hecht’s car, with a menorah on top, yelling at Rabbi Hecht and his children before driving away. A UPS driver repeatedly called Rabbi Hecht an “ape” in Crown Heights. On the first night of Rosh HaShanah, an olive-skinned man threw a full bottle at a congregant walking to services at the Chabad of Forest Hills North. Rabbi Hecht has heard many of these stores, some of which go unreported to the police. 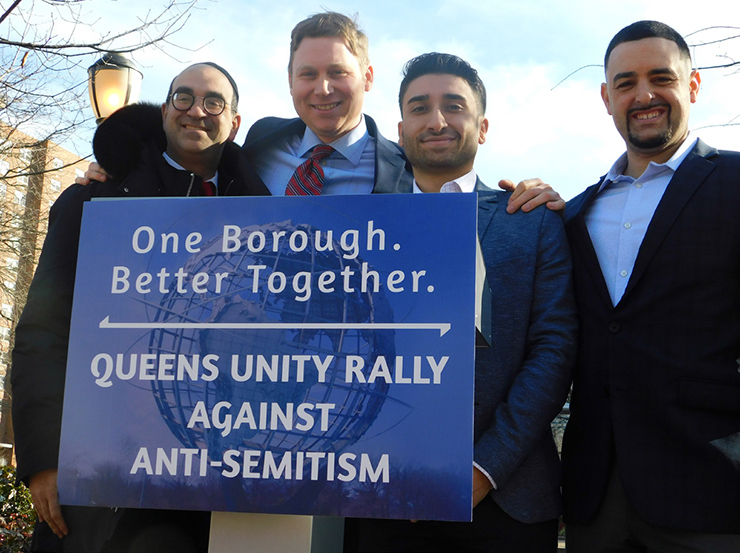 At the rally, Rabbi Hecht and other Lubavitchers handed out Shabbos candles, a magnet with the times for Shabbos, and aided men putting on t’filin. “We need to spread light and push away darkness” by being positive and doing kindness. “Jewish pride – everyone does that in a different way.”

Rachel Epstein said the rally “was overdue. As a community, we need to come together. The people who are sheltered and isolated – that is who needs to get the message.”

Nadina Persaud, a Forest Hills resident, said, “It needs to be bigger. It needs to reach more people.”

Neighbors of other faiths were represented by Bishop Paul Sanchez of Our Lady Queen of Martyrs, the largest Catholic church in Forest Hills. There were also a couple of dozen observant Muslims, identified by the headscarves of the women, and beards of the men. Imam Muhammad Shahidullah of Interfaith Center of the USA delivered a recitation of a Quranic passage relating to peace. His friends spoke of the attacks on Jews as tantamount to attacks on any religious minority group, including their own. 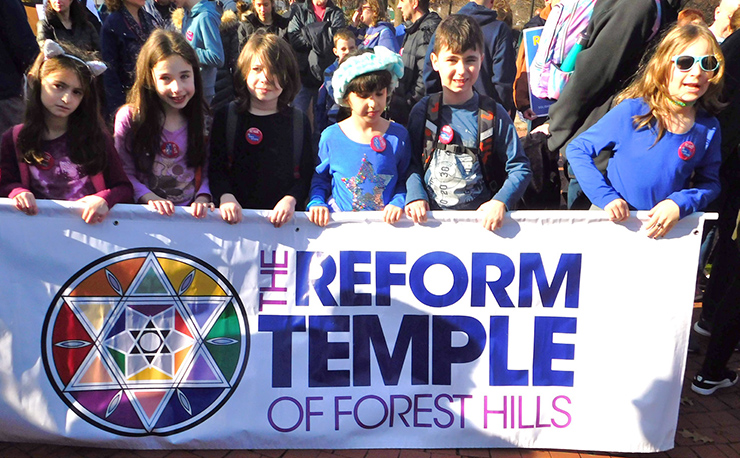 Svetlana Levitin-Khanimov spoke of her grandchildren, who marched across the Brooklyn Bridge, and her own story of helping other Soviet Jews immigrate to freedom. As with the downtown rally, no elected officials spoke before the crowd, but they came and stayed to offer comfort to a visibly shaken community. Councilman Costa Constantinides brought his son Nicholas to show him the importance of solidarity. His colleagues Karen Koslowitz, Jimmy Van Bramer, Brad Lander, Assemblyman Daniel Rosenthal, State Senator John Liu, and Ari Kagan of Comptroller Scott Stringer’s office also stood with the Queens crowd in support. Also at the rally were Queens District Attorney Melinda Katz and State Assemblymen Andrew Hevesi and Daniel Rosenthal. WPIX, NY1, Channel 5, WCBS 880, and 1010 WINS covered the event.

To the east of the city, Nassau County Executive Laura Curran and her Suffolk counterpart Steve Bellone organized a rally against anti-Semitism outside the Nassau County seat in Mineola, where they were joined by Senator Chuck Schumer, Reps. Kathleen Rice and Peter King, and dozens of Long Island political and community leaders. “Anti-Semitism is plague in our society, and hate against any and all groups of people is a problem for our society,” said Assemblyman Chuck Lavine of Glen Cove.

By Sergey Kadinsky and David Schneier 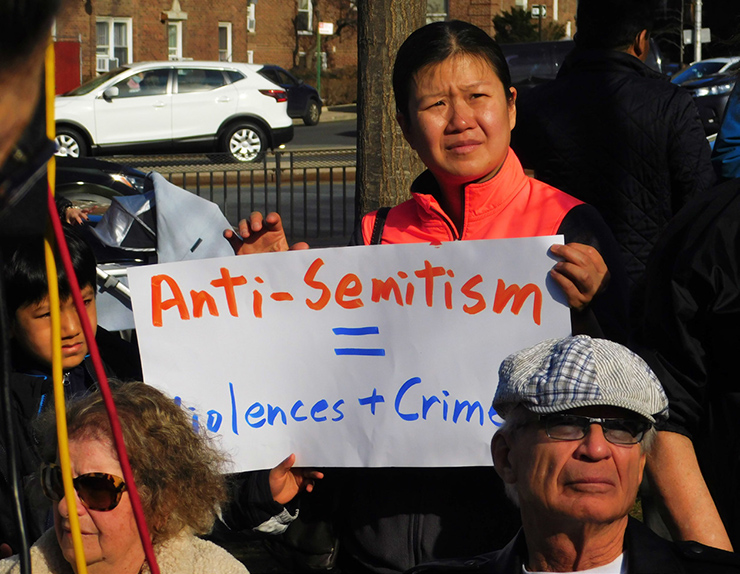 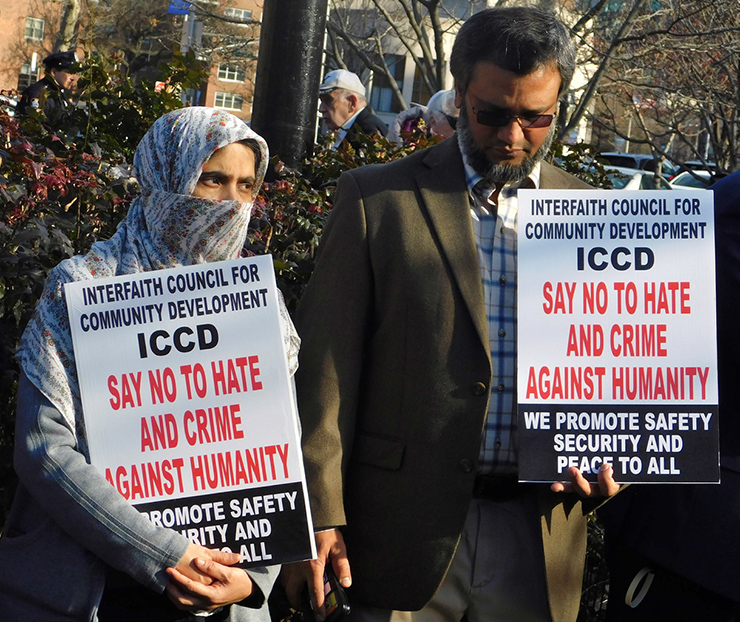 The Principle That Saved Yaakov’s Life