I waited for the moment when every seat in the gigantic arena at Yad Eliyahu would be full, knowing that the sight of thousands of bnei Torah celebrating the Siyum HaShas in loving achdus was not something you see every day. I wasn’t disappointed. Black and white in every section of the arena. Here and there, I could see someone in a yellow vest circulating – Yad Eliyahu security – the contrast in colors catching my eye. 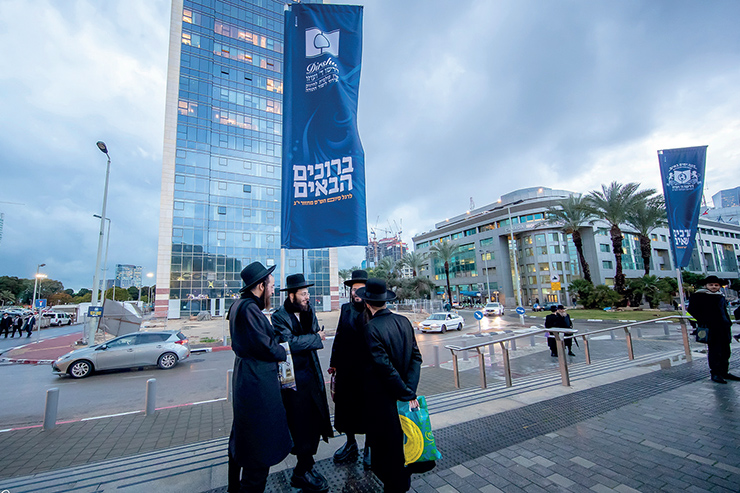 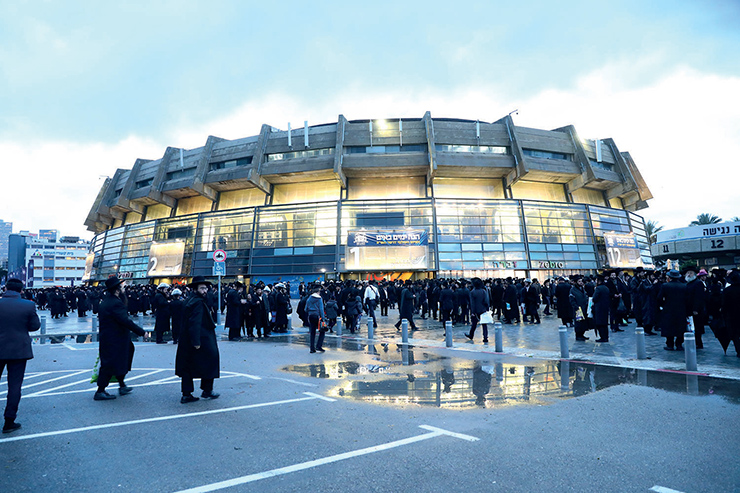 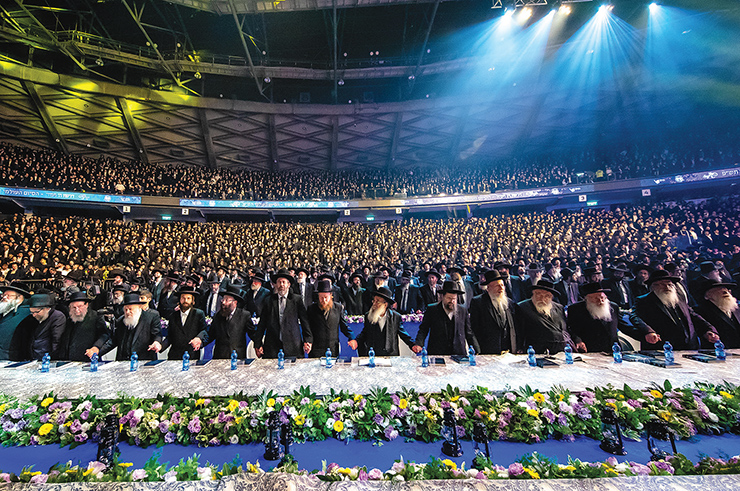 The evening began with Reb Moshe Mona Rosenblum taking his place before the orchestra and leading them in a medley of thunderous marches. While the orchestra played, people found their seats, until the arena was completely full – a picture for all eternity.

As with all Dirshu events, things moved along a strict timeline.

Far down below on what is normally the parquet floor of the basketball court, long tables were set up for the gedolim who were taking part in the Dirshu Siyum HaShas. In the middle of the floor a gigantic table was set up. It was covered with a beautiful tablecloth and surrounded by light-colored chairs. In the center of the table were hundreds of flowers. This regal table was set up for the “Nivchanei Kinyan Shas” – the incredible talmidei chachamim who had been tested on the entire Shas – in one sitting!!!!

Rav Shimon Galei shlita, one of the premier gedolim of Bnei Brak, began the evening with words of chizuk to an audience thirsting for exactly what he was giving them. He spoke with his trademark earnestness and concluded his remarks with a kapitel Tehillim, which he recited line for line with the audience. 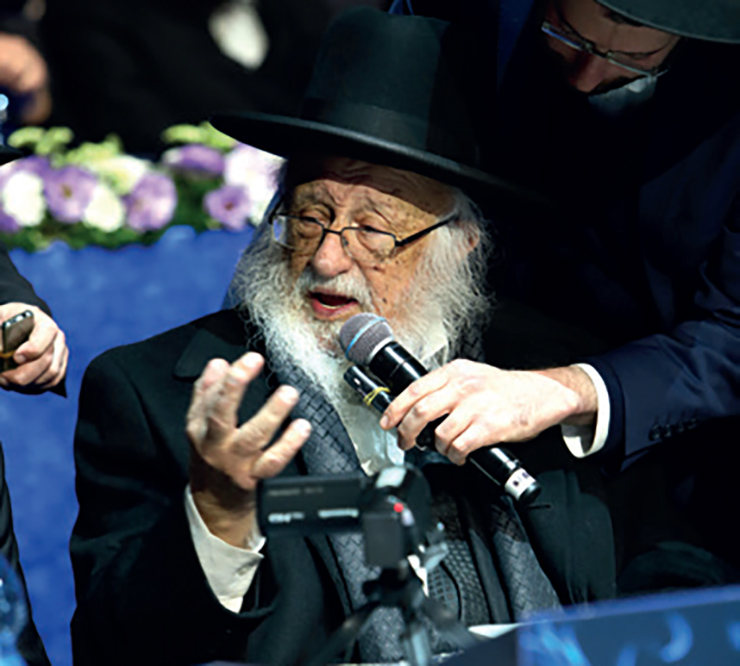 After Rav Shimon’s speech was finished, there was an explosion of sound from the stage, where a full adult choir and children’s choir stood and sang the opening song of the evening. Two singers stood on the stairs separating the two sections of the stage, and sang one of the songs made famous on the CD produced by Dirshu for the previous Siyum HaShas seven-and-half years ago. “Dirshu Hashem V’uzo, Bakshu Panav Tamid!!!” While the singers sang and the orchestra played, pictures filled the screen at the back of the stage – pictures of thousands of Dirshu participants taking tests in batei medrashim around the world. Needless to say it was a memorable sight.

After a musical interlude that turned into a quasi kumzitz in which every member of the audience participated, the MC introduced Rav Chaim Feinstein shlita and invited him to be misayem the Shas. Here it was, the great moment had arrived and Rav Feinstein recited the final words of Shas with emotion and sincerity. He was followed by the Admor of Alexander shlita who recited the Hadran, and Rav Leizer Yudel Finkel shlita, rosh yeshivah of Mir, who said the Kaddish with great concentration as every person in the gigantic arena stood in their spot . Every “amen” shook the rafters. And then there it was – the final “amen!” The orchestra broke out in magnificent melody. The choirs sang, as did the singers, and best of all, throughout the arena, thousands of Dirshu Yidden – and those who are not yet officially members of Dirshu – joined hands and began dancing in their places. “Yehay Rava Kadamach…” Picture the scene. Thousands of emotional Yidden dancing in their places and clapping their hands in time to the beat. Picture their faces as they sing. Imagine the sound. It was truly beautiful in every way. A scene of achdus, a true celebration of Torah learning. “Ana, ana, ana, avda d’Kudsha Brich Hu….” 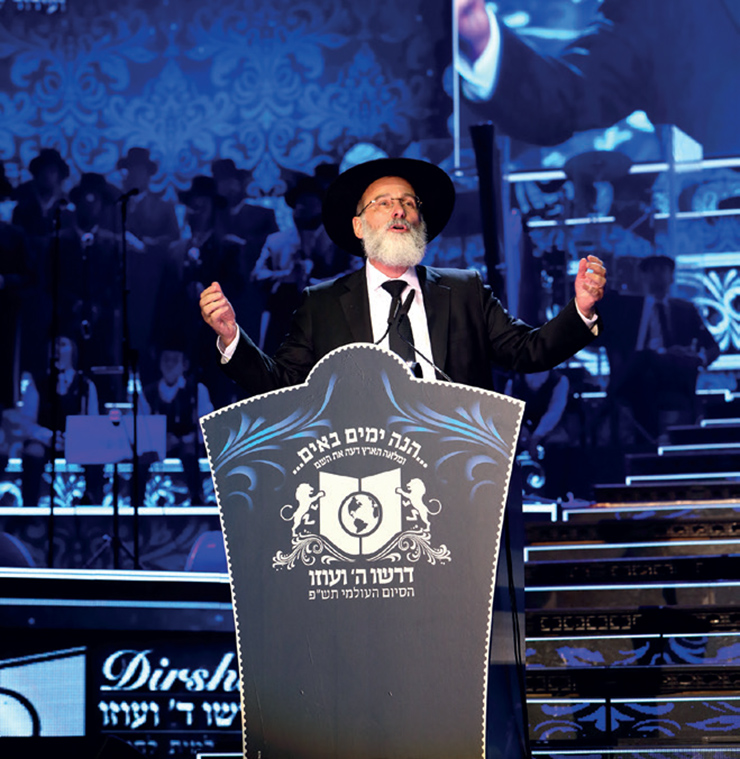 Rav Dovid Cohen shlita, rosh yeshivah of the Chevron Yeshivah, was then introduced and he spoke with his regular passion and enthusiasm for Torah and Klal Yisrael. He was followed by the rosh yeshivah of Ponovezh, Rav Boruch Dov Povarsky shlita, who sat beside Rav Dovid Hofstedter shlita, Nasi of Dirshu, and spoke to the crowd as if they were all his talmidim. This was followed by another interlude of joyous song and dance. Reb Motti Steinmetz suddenly appeared and sang two new songs which had been composed especially for the Dirshu Siyumim of 2020. His pure voice rose through the room, to the ceiling and upwards. And that was just the beginning. Because when he sang the famous song “Habein Yakir Li Efraim,” you could feel the excitement rippling through the room at hearing such a special voice, singing such a special tune.

For the thousands of bnei Torah who filled the room, taking part in such a unique evening – it wasn’t just about what was happening in the arena. Because every word of Torah and inspiration that they were listening to, every Kaddish, every “amen,” every uplifting song and music note, would remain with them way after they left Yad Eliyahu at the end of the night and returned to their everyday lives.

Rav Nissan Kaplan shlita, rosh yeshivah of Daas Aharon, approached the podium. His speech was extremely powerful. He exhorted the audience to grasp the opportunity of the Dirshu Siyum HaShas to take something onto themselves and to not leave the arena without choosing an additional component for their learning and avodas Hashem.

When he finished, the orchestra began playing again and every person in the room rose to their feet and began to dance. The sight of so many people dancing for the honor of Hashem was inspirational in the extreme. The song changed to “Yamim al Yimay Melech,” as Rav Gershon Edelstein shlita, rosh yeshivah of Ponovezh and Rav Chaim Kanievsky shlita entered the arena. The clapping intensified once again and every voice was raised in song. People were jumping in their spots, as the princes of Torah took their places beside Rav Dovid Hofstedter. “Ashrei Ha’am Shekacha Lo, Ashrei Ha’am She’Hashem Elokav!!!” 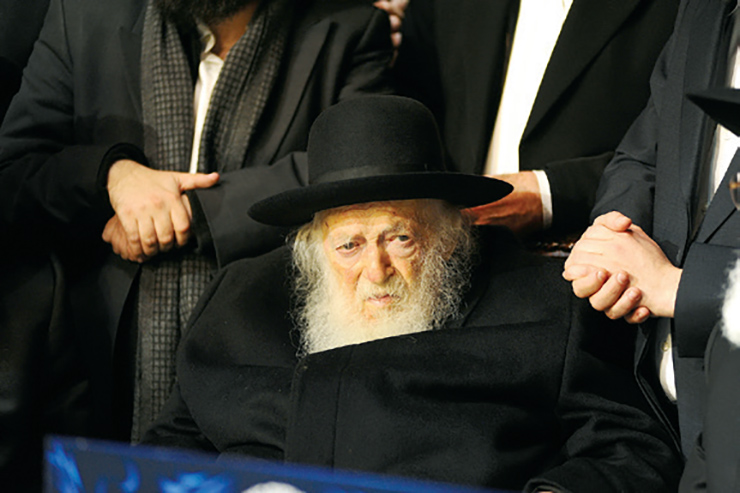 Rav Gershon Edelstein was then introduced and he spoke to the crowd, in his concise style, reminding them of the reason everyone had gathered together at Yad Eliyahu in the first place and what the goal was for such an evening. This was followed by a speech given by Rav Chaim’s son, who read the words and beautiful berachah penned by his illustrious father, especially for this evening. Another letter was read by the son of the Belzer Rebbe shlita on behalf of his father, the Admor of Belz, and was followed by a drashah delivered by Rav Boruch Mordechai Ezrachi shlita, who spoke with all his heart.

All in all, the evening had been absolutely incredible on every front. It was a night that nobody there would be able to forget. It was a night of Torah celebration, a night of pride in being a Yid – and every person in the great hall knew it and felt a tremendous debt of thanks to Rav Dovid Hofstedter for everything he constantly does for Klal Yisrael. 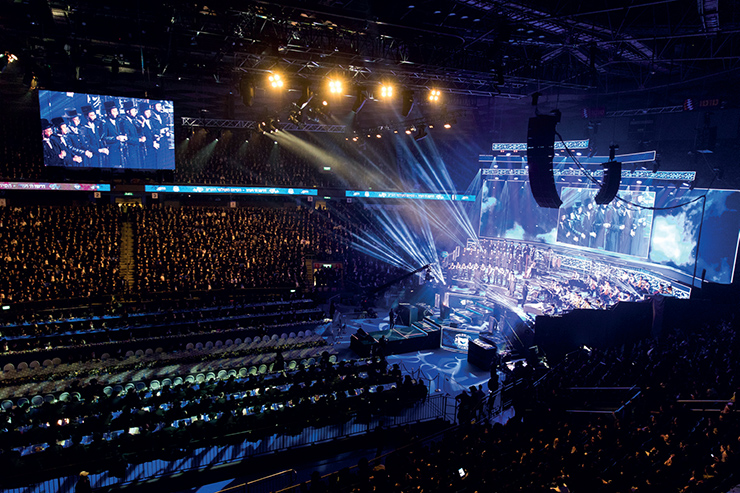 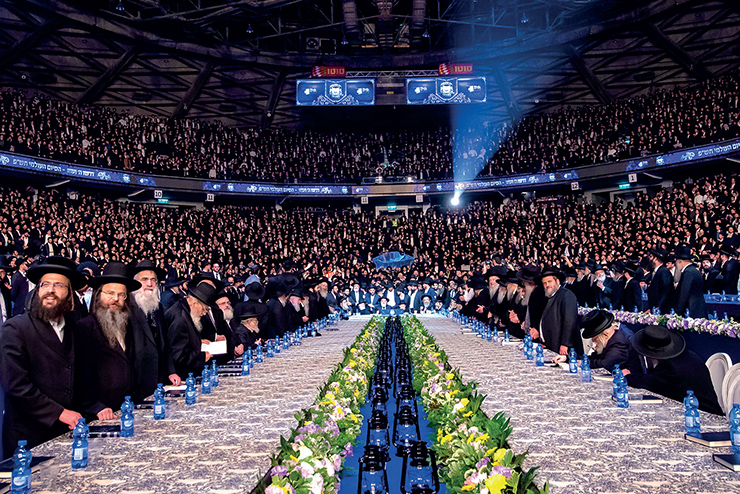