During domestic violence awareness month, Met Council sent out the clear message that you are not alone if you identify with one of the following queries: Does your partner try to run your life or tell you what you can say or do? Does your partner constantly put you down, call you names, or embarrass you in public? Does your partner restrict access to your finances? Do you feel physically or emotionally threatened by your partner?

Domestic violence takes on many different forms, including physical, emotional, sexual, psychological, or financial abuse. It is vital to be knowledgeable about the risk factors and warning signs involved.

Common is physical abuse, where any direct or indirect action may cause harm to someone’s wellbeing. Obvious warning signs consist of hitting, kicking, beating, or any physical force to harm or hurt another. Also included is the act of withholding physical needs like sleep, food, or medicine, in addition to forcible restraint without consent. This, as well, includes the use of weapons or items to harm or intimidate.

The statistics are staggering: One in four women and one in seven men have been victims of physical violence by their partner. On a similar note, one in four children – which is over a whopping 18 million children – is exposed to family violence during his or her lifetime. 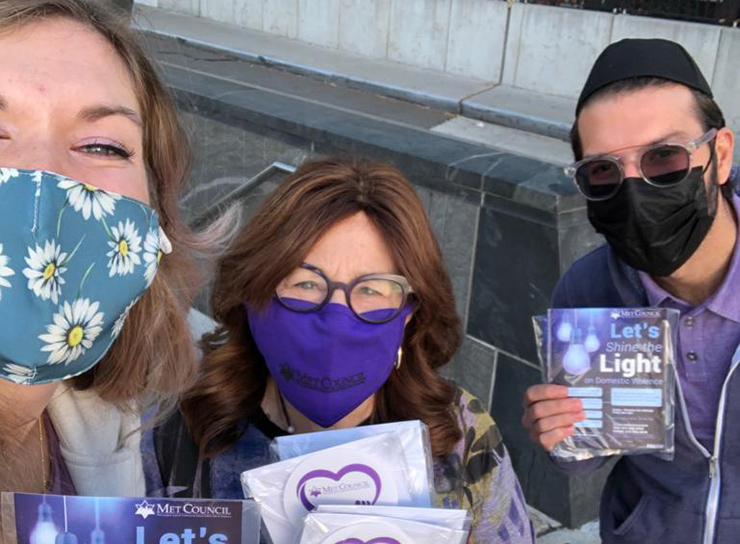 In New York alone, there were 18,941 people who entered a shelter due to domestic violence, according to the New York City Comptroller’s Office of Housing Survivors for the year 2019. Finding an apartment is usually the hardest challenge for domestic violence victims, and therefore they often return to their abusers because the shelters only last for a six-month duration.

Domestic violence hotlines are available nationwide, and they receive upwards of 20,000 calls daily. Met Council representatives Channah Ginsburg and Jessica Klein spent a recent Thursday morning in Briarwood, Queens, where staff met with passersby to increase awareness and give a message of hope along with a complimentary flashlight in the signature purple color to help shine the light on domestic violence. Assembly Member Daniel Rosenthal and Simon Sebag, Jewish liaison for Public Advocate Jumaane Williams, spend some time at the Briarwood subway station educating locals.