The students of the Bais Yaakov Academy of Queens are hard at work with creative, thoughtful, and meaningful projects in literacy! The second graders are working hard to create their second book of the year. This book is based on a science unit on animals. The girls studied and researched different animals while learning a new medium for illustration. In their books, they are using their research skills and displaying a special technique called collage. This technique was used by well-known author Eric Carle. The girls are having a wonderful time while they expand their writing horizons!

The sixth graders read a touching story called, “Hattie’s Birthday Box.” After completing the story, each student drew a classmate’s name to be her secret box buddy. The girls designed boxes of hope and inspiration for their classmates. Each box included five complements, one original poem or story, one letter of encouragement, one creative illustration, and one handmade gift. The girls did a beautiful job displaying their creativity and sensitivity as they worked hard on bringing inspiration to their classmates! 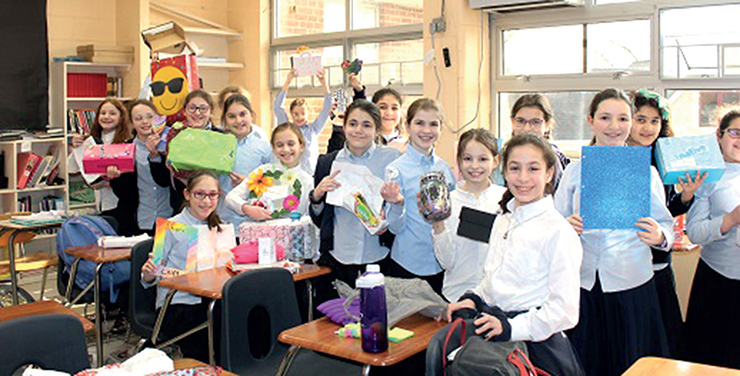 In the seventh grade, the girls are working on a research project of famous persons who overcame challenges and their contributed achievements. Some examples of famous people are Franklin Delano Roosevelt, Christopher Reeve, Thomas Edison, Ludwig von Beethoven, Michael Phelps, Albert Einstein, and Winston Churchill. The girls are inspired by the way these people overcame difficulties, yet persevered and became so successful! Literacy and learning are rigorous and relevant at Bais Yaakov of Queens!