After the horrific massacre of innocents at the hands of not one, but two mass shooters last week, the nation had the opportunity to use the moment to come together. One shooting was by a white supremacist, the other by an Antifa-supporting socialist. While there is still a deep divide on how to address the problem, everyone should have banded together to universally condemn white supremacy and Antifa violence. That didn’t happen because there are too many who are willing to stand on the graves of the dead to score political points against President Trump.

This egregious display is not the first occurrence of shameful reporting in 2019. In February, the top story in the country was about a group of MAGA-hat-wearing students from Covington Catholic School “harassing” a Native American man after the March for Life. The reality was quite the opposite. A longer video was released within 24 hours of the originally published story demonstrating that these students were merely trying to calm a tense situation when obscenities were being hurled at them. The journalistic malfeasance actually resulted in a lawsuit against The Washington Post (which was recently dismissed because of the First Amendment). 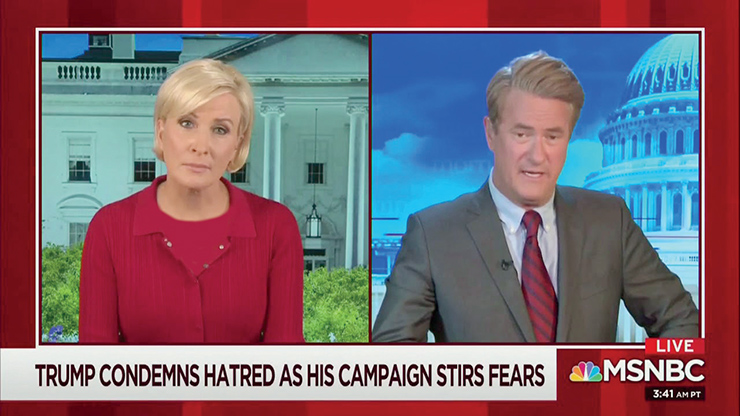 The reporting this week is of a different nature, but it’s rooted in the same issue: absolute hatred for President Trump and conservative policies. The great sin of the Covington Catholic students was not that they stood in front of a Native American man beating a drum; it was that they were wearing hats bearing Trump’s 2016 slogan and participated in a pro-Life march. That earned them the ire of the Left, which included former CNN host Reza Aslan tweeting, “Honest question. Have you ever seen a more punchable face than this kid’s?” This week, multiple networks, celebrities, and presidential candidates got in on the action.

MSNBC’s Nichole Wallace claimed that President Trump wants to “exterminate Latinos.” Chris Matthews and panelists questioned if President Trump even cares about the shooting victims. Mika Brzezinski said that Trump “seems to want” these mass shootings to happen. Joe Scarborough accused all contributors of Trump’s reelection as funding a “white supremacist campaign.” Charles Blow wrote in The New York Times that Republican lawmakers have the same goals as white supremacist killers. Dan Rather encouraged journalists to not quote Trump because “he sometimes says the right thing.” The New York Times changed its headline after it was attacked by the Left for being too objective.

This just scratches the surface of the hours of coverage dedicated to attacking the President by calling him and anyone who supports him a racist or a white supremacist. What was his great crime? His policy proposals. The mainstream media push for gun control legislation and an open southern border. President Trump and Republicans don’t agree. The media has fully embraced their responsibility as the personal spokespeople of the Democratic Party. This is why Democrats themselves feel comfortable using inflammatory rhetoric to attack Trump and the tens of millions of Americans who voted for him in 2016 and plan on voting for him in 2020.

Cory Booker said “no” when asked if he accepts Trump’s condemnation of white nationalism. Beto O’Rourke called Trump an “avowed racist.” Elizabeth Warren called Trump a white supremacist. Democratic Mayor (of Dayton, Ohio) Nan Whaley encouraged people to protest Trump’s visit to the victims in the city. Juaquin Castro, Democratic Representative from San Antonio, Texas, targeted his own constituents for harassment by tweeting out the names and workplaces of Trump donors. His brother, Julian Castro, who is running for the Democratic nomination, supported him. Kamala Harris began fundraising off of the mass shooting. Joe Biden compared Trump to the KKK.

Excoriating your political opponents and their supporters and lumping them in with the dregs of society used to be frowned upon. These Democrats not only maliciously attacked the President, they blamed him for the shooting in El Paso. By claiming that rhetoric causes violence, though, they open themselves up to that same attack. A Bernie Sanders supporter shot up Republican Congressmen on a baseball field shouting “this is for healthcare.” The Dayton shooter was an Elizabeth Warren supporter. A terrorist tried to blow up an ICE facility in Tacoma, Washington, a few weeks ago, calling them “concentration camps,” echoing Alexandria Ocasio-Cortez.

President Trump isn’t even the only president whose rhetoric was used as fuel for murder. In 2016, 14 police officers were shot and five were killed in Dallas by a Black Lives Matter radical. No outlet or Republican blamed President Obama’s anti-police and pro-Black Lives Matter rhetoric, but if the rules were consistent, they would have. Same is true for the protests at Senate Majority Leader Mitch McConnell’s house last week. An Elizabeth Warren-supporting protester said in a live video that she wanted someone to “just stab [McConnell] in the heart.” Twitter locked out the accounts of McConnell’s campaign team, who wanted to show the threats that the Senator faced. This is the same Twitter that allowed a hashtag of #MassacreMoscowMitch to trend over the previous weekend. Then these same people claim that President Trump’s language causes violence.

America had a brief opportunity. President Trump is not a unifying figure, and many times he says the wrong thing. This time he said the right thing. This time he was unifying. That outstretched hand was smacked away, the olive branch tossed and burned. Prior to the 2018 midterm elections, Hillary Clinton said about civility, “...if we are fortunate enough to win back the House and/or the Senate, that’s when civility can start again.” The Democrats won the House, and civility is nowhere to be found. They’ll claim that once they win back the Oval Office, that’s when they will be civil. When they accuse millions of Americans of white supremacy and claim that those Americans are responsible for the murder of innocent people in a Walmart in El Paso, Texas, the days of civility are long gone. It will take a long penance before those days can be seen again. Don’t hold your breath.