Truth: Our nation depends on women not being hidden.

There’s a group on social media called “Women Emuna Builders.” The idea is to focus on tefilah and on faith in Hashem. The leader of the group, Esther, is an American olah who likes to daven at the graves of various tzadikim. Recently, she came to New York to daven at the Ohel Lubavitch and she invited friends in New York to meet up with her there, myself included. I did get some davening done but I also met Esther and a bunch of other women. None of us are Lubavitchers, but we all hope that Hashem answers our tefilot with a “yes.”

While I and the others appreciate this group, it’s nothing new.

There are those who talk about women “knowing their place.” The truth is that we have always known our place. Part of that is representing emunah. We women have represented emunah throughout our history. It was that emunah that brought about geulah in many instances. Now that Chanukah is coming up, we need to remember that. 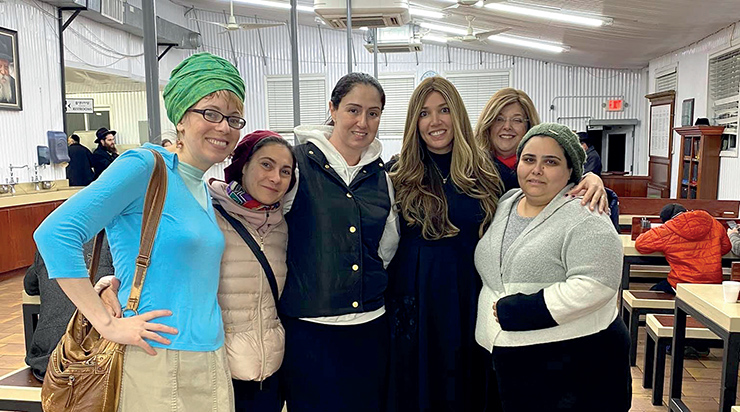 As a general rule, women are exempt from mitzvot aseh she’hazman gramah - time-bound commandments. But there are a number of exceptions to this. One of those exceptions is Chanukah and the mitzvot associated with it. The basis for that exception is “af hein hayu b’oto haness” - that is, we women were as much a part of the miracle of Chanukah as the men. Even as a small child, I learned about Chanah and her seven sons and their kidush Hashem. Later, I learned about Yehudit and her heroism. Would we even have had a nes Chanukah without these women?

Torah Judaism has never allowed our women to be erased or silenced. Quite the opposite. Our Torah tells the stories of heroines like our imahot, Miriam, Devorah, Yael, Rut, Esther, and others. Later, we had other nashim tzidkoniot such as Bruriah, Ima Shalom, Gracia Nasi Mendes, and Gluckel of Hameln. In modern times, we had Nechama Leibowitz, Rebbetzin Henny Machlis, and Rebbetzin Esther Jungreis. Those are just a few examples. And while we don’t have photos of all our heroines, we do have images of many of them and we don’t deserve to lose any of that.

Sarah Schenirer is one modern example of a heroine for the history books. It didn’t happen right away considering that many rabbis were not in favor of her innovation. But Frau Schenirer saw the girls getting lost and took that stand for Torah values - and by the time she passed away, she was recognized as someone who had saved our girls and preserved Torah Judaism.

A big part of what makes these women role models is that we have images of them. These women were not just larger-than-life spiritual figures whom we cannot hope to emulate. The images show real human beings whom we can emulate. And they were able to reach out to fellow Jews by relating on that human level.

None of this is to say that anyone - man or woman - should be forced to show themselves in photos. There are people out there whose personal style is subtler and more inconspicuous, and they prefer to stay behind-the-scenes. It’s who they are. What matters is that they themselves are making that choice and not having that choice made for them. (Note: The photos here are used with the full permission of the ladies in them.)

When it comes to women knowing our place, we’re the ones who have always known our place. As mentioned above, our Torah documents the nashim tzidkoniot of that age and our history documents those who came after. In fact, we read about one of those nashim tzidkoniot in Parshat Vayeishev. Tamar confronted Yehuda with evidence of his wrongdoing and essentially put him in his place. He responded with “tzadka mimeni…” acknowledging that she did put him in his place and that she was right to do so. According to several commentators and scholars, including my teacher Rabbi Ari Kahn, when Yehuda said this, he earned the zechut of being progenitor of Melech HaMoshiach.

As we approach Chanukah, I ask all women out there to remember your place. For some women, that place is behind-the-scenes. For others, that place is more front-and-center. What matters is that we each use our place to represent emunah and help preserve and propagate Torah and Mitzvot. That means never hiding and never allowing ourselves to be erased or silenced.

Dedicated to my bubbys and grandmas from all sides of my family: Devora bat Avraham a”h, Miriam Bryna bat Meir Shraga HaLevi a”h, Sarah Nechama bat HaRav Azriel Nechemia a”h, Sarah bat Yosef a”h, and Dinah bat Eliezer Lipa HaCohen a”h. They were not high-profile ladies but they knew their respective places and they taught me by example to find my place.

Meira E. Schneider-Atik is a wardrobe organizer, personal shopper, jewelry design|er, and fashion writer/blogger and speaker. She helps women look great while saving time, effort, and money, all within tznius guidelines, and she’ll add to that with custom-designed jewelry. Read more about her ideas on her blog- www.truetzniutistruebeauty.wordpress.com. She also has a YouTube channel, “Look Your Best in Mitpachot,” where she does head-wrapping tutorials, and she is also available for private demonstrations. She can be reached at (718) 644-6135 or at This email address is being protected from spambots. You need JavaScript enabled to view it. .