“Mirror, mirror, on the wall, who’s the fairest of them all?” chanted the evil queen in the famous children’s story of Snow White. In another famous story, we see how enchanted and disappointed Alice was as she approached and entered into the looking glass.  Rows of makeup mirrors on cosmetic counters in department stores can make you dizzy. Mirrors have an interesting place in our psyche. Do they hold truth, vanity, mystery, or divinity?

Are mirrors holy objects? Can a mirror reflect Divinity? Mirrors are objects of self, yet can be used for G-d’s glory. This possibility and absolute truth came straight from the Torah. 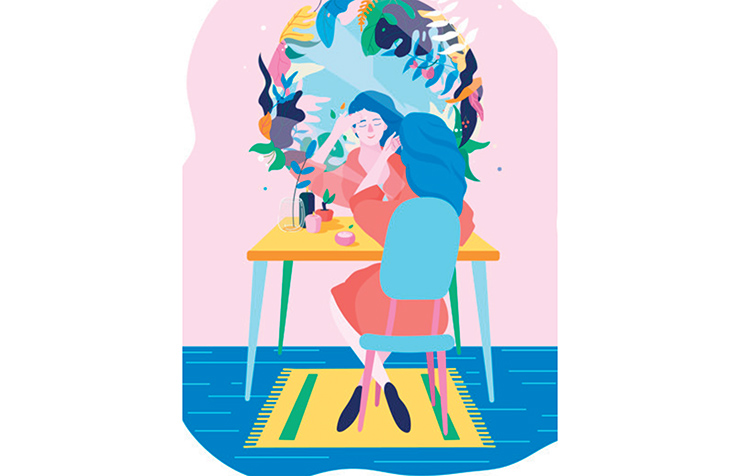 Exodus 38:8 tells us that the bronze laver (washing basin) and its base of bronze of the Mishkan were made from the mirrors brought by “the women who served at the entrance to the tent of meeting.” The Jewish women used highly polished brass and other metals during their time serving as slaves in Egypt. Their donated mirrors were the only materials allowed to be utilized in Hashem’s washing station for the priests (kohanim). The most important servants to G-d were instructed to rinse and prepare themselves in this area of the Mishkan and continue into the future building of King Solomon’s holy temple. Additionally, the washing basin was the only part of the holy temple that grew larger over time, while all other parts remained exactly the same, thereby showing that women are associated with growth.

According to the Ibn Ezra, the kiyor, the basin, is given limitless dimensions because every single mirror donated had to be used in its construction no matter how big it would become. There was no cap put on this particular type of donation. This fact about the use of the mirrors displays the tremendous importance of these mirrors to Hashem. What was so special about these mirrors that not even one could be left out of the construction process?

A brilliant answer taught in the Midrash Tanchuma states that the donors were the mothers of many children, and the many mirrors represented their endless faith and commitment to ensure the continuation of Judaism for generations to come. Who were these brave Jewish women and what did they orchestrate in order to be credited with such a great honor?

When the Jewish people were enslaved in Egypt, the Pharaoh deliberately kept the men away from their wives so that no children would be born, and the Jewish nation would cease to exist. The Jewish men were in an exhausted state of depression and anxiety, thus creating the realization that they could not bring themselves to father children who would ultimately enter a world of slavery. However, the Jewish women could not think in that same manner. Therefore, the wives used their mirrors to attract and seduce their husbands in order to ensure the existence of futures generations and preservation of am Yisroel.

The Jewish women had a mission that needed the execution of their transformation to “desirability” for their own mental health as well as that of their spouses. The mirrors had a purpose - of enabling them to beautify themselves - that today is often misinterpreted as being vain or immodest.

We can take this to another level as well. The women used their precious mirrors to alter the men’s vision. A mirror’s prime feature is to reflect; however, it also narrows the field of vision, like a filter used in Instagram or Facebook. Looking into the mirrors, the men could see only the Jewish reality, not the helpless backdrop of enslavement, thus temporarily distorting their grave reality with a more positive futuristic one. It was that vision that was required to focus upon.

In a wonderful article in “Hidabroot,” Dr. Mordechai Tobias writes: “The story is also brought in various other midrashim as well as in the Gemara (Sota 11b), to explain that when the women wanted to donate the mirrors, Moshe Rabbeinu had intended  to reject them because they seem to be associated merely with sensuality. Hashem, however, told Moshe to definitely accept them, ‘because these are the most cherished to Me of all!’ The reason, explained Hashem, was that they represented the way the nashim tzidkaniyos of klal Yisroel had guaranteed the future of the klal Yisroel - somehow the mirrors were intrinsic to the way they did it.”

“Each woman would hold up her mirror and the couple would look at each other in the mirror and then the wife would say ‘am I not more beautiful than you?’ and (according to the recent Zichron Aharon edn. based on thorough study of original manuscripts) the husband would say the same to his wife!...and she would then conceive…. under the apple tree I aroused you’ (Shir HaShirim 8:5).”

When the women rushed to bring their mirrors to contribute to the Mishkan, all the mirrors were to be used; for every Jewish women’s reflective faith was represented in the building of Hashem’s home in this this realm.

Maybe this coronavirus is a call for Jewish women to once again get out their mirrors and distort the grave reality and only reflect a positive future. Maybe our mirrors reflect back the image of the arrival of mashiach.

Mirror, mirror, on the wall, who’s the fairest of them all? Every Jewish woman is Hashem’s answer!

Jewish Financiers Speak In KGH On Balancing Observance And Business