The cold temperature did not deter nearly 25,000 people from expressing solidarity against anti-Semitism in a historic rally that began in downtown Manhattan. Billed as the “No Hate, No Fear Solidarity March,” the rally kicked off at Foley Square, with a march across the Brooklyn Bridge, concluding with speeches and performers at Cadman Plaza in Brooklyn. “Thousands of New Yorkers marched across the Brooklyn Bridge today to send a message: We have no tolerance for anti-Semitism and hate,” Governor Andrew Cuomo tweeted, with a video of the march.

The entirety of the city’s political class was there, including Senators Chuck Schumer and Kirsten Gillibrand, Mayor Bill de Blasio, Council Speaker Corey Johnson, and dozens of their federal, state, and city colleagues. But none of them spoke before the crowd, following a decision by rally organizers to avoid the appearance of partisanship. “This was the first rally where they did not speak and it left a huge impression on participants,” said David Aronov. 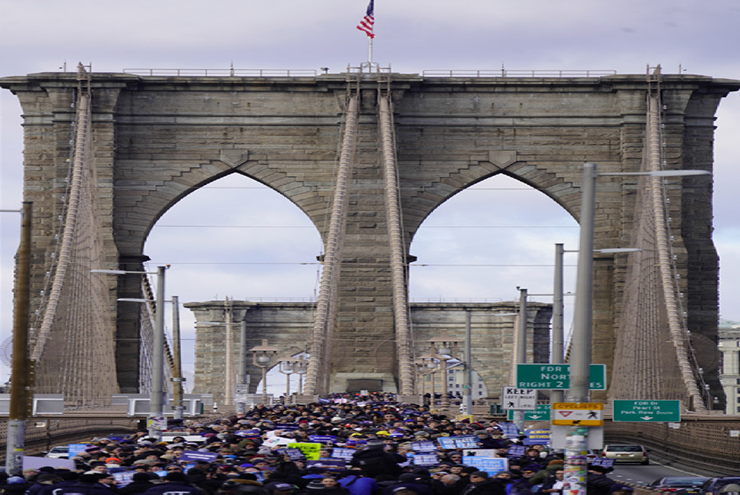 He marched with Enita Iskhakova and Manashe Khaimov under the banner of the Bukharian Jewish Union, representing their portion of a very diverse population united by their outrage in light of recent incidents. “It was a little bit surreal. There were Jews of every background there. There were people there who did not know about Bukharian Jews and it was nice to have representation.”

Kew Gardens Hills resident Michelle Szpilzinger also picked up on the rare diversity that included Reform and Orthodox Jews, political liberals and conservatives, a few black hats and a handful of rainbow flags. One such example was Yeshiva University President Rabbi Ari Berman, walking across the bridge with Rabbi Rick Jacobs, President of the Union for Reform Judaism.

“The mood was positive and uplifting, very focused on the mission at hand, which is to stand against anti-Semitism,” said Szpilzinger. “It was a very diverse crowd from super-liberal to right-wing.”

This theme was noted by New York Times columnist Bari Weiss, who spoke to the crowd with 28 reasons on what makes her a Jew. 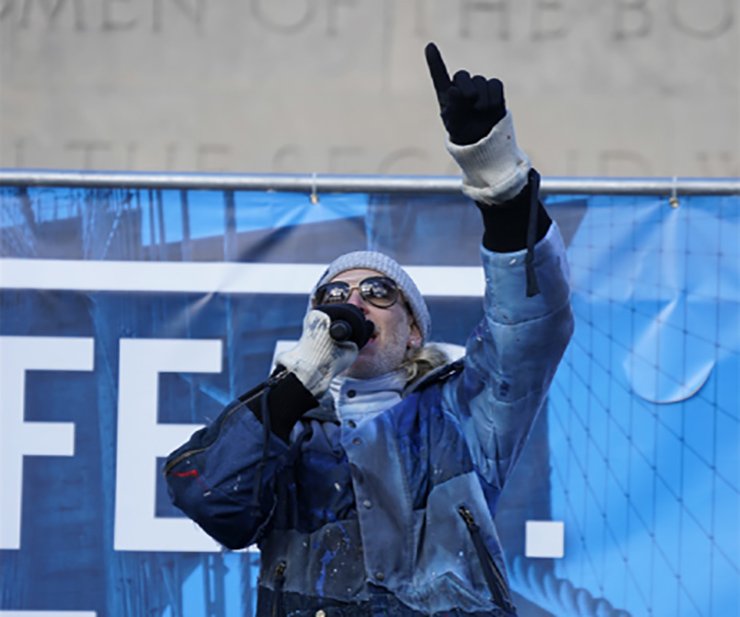 The official posters carried by participants were blue and white with the slogan “No hate. No fear” and the logos of the UJA-Federation of New York, Jewish Community Relations Council, ADL, AJC, and the New York Board of Rabbis. But there were also plenty of handmade signs that expressed individual fears of anti-Semitism and the desire for others to understand. “#MeJew. Don’t wait till we are DEAD. Show solidarity with our way of LIFE,” was the sign carried by Masbia CEO Alexander Rapaport.

“If you’re not showing up, then you don’t have a seat at the table,” said Rapaport. “I came to show support to Chaskel Bennett.” The Agudah activist was introduced before the crowd at Cadman Plaza by Malcolm Hoenlein, delivering a stirring defense of Orthodox Judaism. “I stand here with tremendous pain and with a heavy heart. It is my identifiable Orthodox Jewish community that has recently come under attack more than any other. Despite us desperately sounding the alarm, until today we really have not seen nearly enough sympathy or understanding for this sad reality – even from some of our own.” 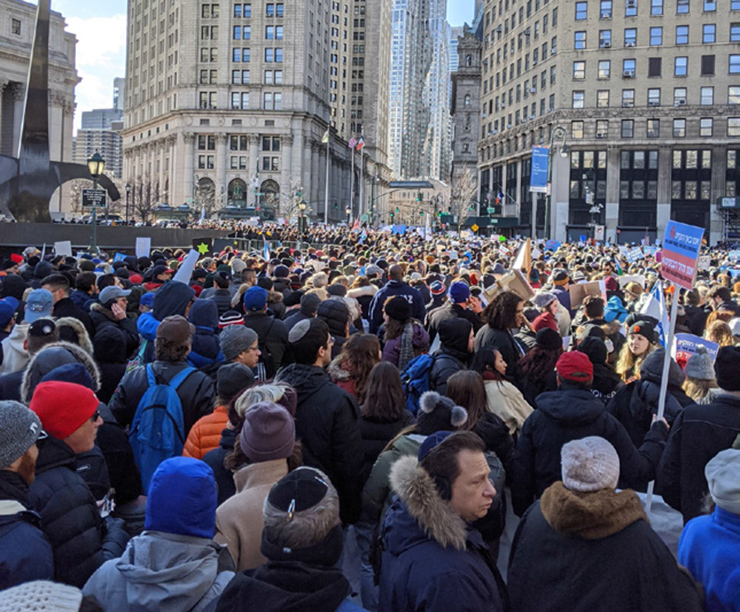 “This violence didn’t begin in a vacuum. It is the product and outgrowth of years of unchecked bias, prejudice, and misunderstanding,” Bennett said. These words resonated with Rapaport, who remembered the murder of chasidic landlord Menachem Stark exactly six years ago this week. “Who Didn’t Want Him Dead?” was the outrageous headline on the front page of the New York Post at the time.

“That was an extreme example. Then there are my father and Yossi Gestetner pointing out that there is a difference between criticism and generalizations and stereotypes. In tabloids and on social media there’s hatred,” said Rapaport. “Don’t generalize about bad landlords, or generalize all schools as ‘the yeshivas.’”

Bennett looked at the mostly non-Orthodox crowd and took it to task for accepting negative stereotypes of Orthodox Jews.

“Anti-Orthodox antagonists are using social media to spread ‎the most vile and despicable anti-chasidic bigotry online. These hateful smears are shared, liked, and re-tweeted unabated. There is a strong belief of a direct connection between the online hatred aimed at Orthodox Jews and the dramatic increase in violence against chasidim.”

Kew Gardens Hills resident Jeff Kohn heard the speech of Devorah Halberstam, whose son Ari was killed on a Brooklyn Bridge ramp in 1994 by a gunman inspired by anti-Semitic ideas. “Today we are all Monsey. Today we are all Crown Heights,” she said. “We will not tolerate being attacked in our shuls, in our homes, or walking down the street.”

“When Mrs. Halberstam spoke, you could feel her pain,” Kohn said. “Her son was killed because he had a kipah on his head.” 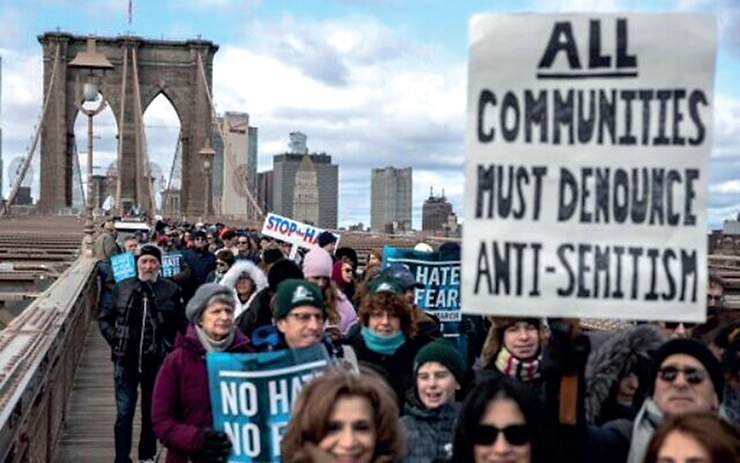 Szpilzinger said that as anti-Semitic incidents continue, so would the conversation on the vulnerability of “visible Jews.” The desire of thousands of people to leave the virtual conversations on their phone screens and be there in person demonstrated a genuine desire to address this rising form of hatred before it gets out of hand.

Local events are planned to continue the conversation. This Sunday at noon, the Queens Unity Rally Against Anti-Semitism will take place at MacDonald Park in Forest Hills, that neighborhood’s symbolic “town square” sandwiched between its commercial center and the borough’s busiest road. “Queens is the most diverse Jewish community outside of Israel, and I want people who could not make it to the Manhattan rally to feel included and express solidarity,” said Kohn. The roster of sponsoring organizations and speakers reflects the diversity of the Manhattan rally and Jewry in general.