Where could we go this summer to escape from the pandemic? After canceling two previously planned trips for this summer, we switched our destination to Maine, a place we’ve enjoyed visiting many times before. Maine has glorious mountains and sparkling mirrored lakes. We packed plenty of hand sanitizer and masks and headed on our way.

When we reached the border, there was a new sign next to the “Welcome to Maine” sign that lit up with the message in bold letters: “If you feel sick, stay home.” We felt fine, so we kept going. Pandemic reminders seemed to have followed us here!

Stopping at a Walmart for supplies, the front display featured a variety of masks, hand sanitizers, and hand soap. Reluctantly, we loaded the cart with two of each item.

My favorite signs in Maine are the ones that say “Brake for Moose” or “Moose Crossing.” Of course, I don’t actually want to have to confront a moose on the road, but it’s nice knowing they’re around. Even at the trailhead, we couldn’t avoid pandemic reminders. There was an illustrated sign that said, “Keep socially distanced: One brown bear, two loons, or three raccoons. See photo above. I’d rather see two loons or three raccoons than one brown bear, but I think I’d prefer to not have to social distance. Sigh! 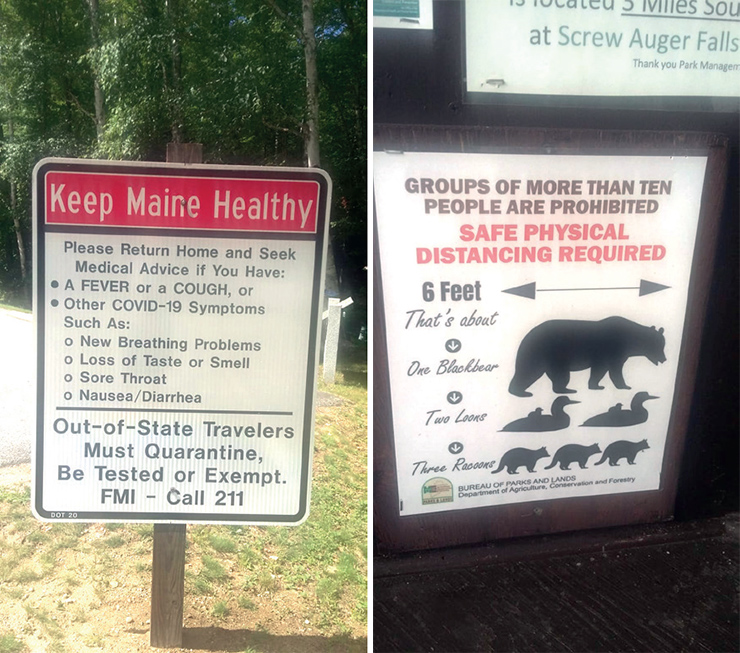 In Acadia National Park, we waited in the hot sun in a socially distanced line to get into the information center. The line inched slowly towards the door. When we finally were allowed entrance, we discovered that it was not the information center anymore; it had transformed because of the pandemic into a small gift shop. The information center was now located outside and we’d passed by it without realizing what it was. The information booths were in open tents outside, behind Plexiglas, and the masked ranger was wearing gloves and used a pointer to show us various hikes on the map. There were large signs reminding hikers to social distance and wear masks.

Okay, when we get onto the trails we’ll be able to put all these pandemic reminders behind us, I decided.

However, at the trailhead there were signs warning about symptoms of COVID-19. If you have fever, chills, body aches, loss of smell or taste, a cough, or unusual exhaustion, stay home. I turned away from it, thinking it’s even here, out in the wilderness. We surveyed the license plates of parked cars near the trailhead and discovered that they were all from New England states or New York or New Jersey. “Looks like a lot of New Yorkers and New Jerseyans had the same idea as us,” my husband said.

There are hiking etiquettes like no music, no littering, and greeting people. We soon discovered, as we hiked, that this summer there were additions to the hiking etiquettes. While hiking along the trail, breathing in the pure mountain air, hikers would remove their masks; but as soon as they came anywhere close to another hiker, they would whip out their masks and mask themselves. To keep socially distanced, on the trail we found ourselves moving close to the edge of a quite uncomfortable drop and mumbling politely through our masks, “Hello, have a good hike.” Standing on the trail, I gritted my teeth behind my mask, hoping they would pass by quickly, as I noticed we were moving closer and closer to the edge of the cliff.

Hikers often hike with their dogs unleashed. Sometimes dogs will head right towards you. Even if you’re not a dog lover, or even if you might be a bit scared of dogs, you have to act like you like them and hope they won’t bite you. Usually the dog, who knows nothing about socially distancing, prances right towards you. Several large poodles and a mutt did just that. Thankfully, none of them growled or lunged at me.

In past summers, we would normally hand our camera to a passing hiker and ask them to take our picture. This summer we hesitated. What if they have it of if they were exposed? In the end we did ask someone to take our photo and we also took theirs, but we had to sanitize the camera and our hands afterwards.

We had stopped at a rest area before reaching Maine, and we met a frum couple there who told us that there was a minyan in Bangor, which was what we were hoping. What hashgachah!

“Are you sure?” I asked. Masks make it hard to know for sure.

“It’s them,” he said. He greeted them and then they realized after studying my husband behind his mask that they’d met him before. They mentioned that there was a minyan in Bar Harbor that was close to the hike trail.

The Minchah minyan at 9 High Street in Bar Harbor was in front of the kosher bed and breakfast. The minyan took place on the front porch, and participants wore masks. I marveled at the large number of people who were there. I recalled another summer many years ago when we had to scrounge around looking for people to make a minyan in the exact same location. This overflow crowd was another indication of the pandemic sending more New Yorkers and people from New Jersey to Maine.

We decided to go to the Gem and Mineral Museum in Beth El, Maine. There couldn’t be any pandemic reminders in this type of museum. We saw exhibit after exhibit of different gems mined in Maine. As we rounded the corner, we encountered an old-style gem store with an antique cash register. Who was standing behind the counter? There was a mannequin wearing a mask. Yikes!

Later, we drove to New Hampshire so we could drive up Mount Washington. As we drove up the mountain trying not to look out the window at the 6,288-foot drop, and with our ears popping, I asked my husband, “Why did we want to do this?”

“We want that bumper sticker that reads, “This car climbed Mt. Washington,” he explained.

As we continued to ascend, another vehicle narrowly passed us coming from the other direction. I swallowed as our car maneuvered the curve close to that stomach-dropping edge.

“Well, on the way down we’ll be farther from the edge,” I said hopefully.

“No, it switches back and forth,” my husband informed me.

“Oh, are you sure we want that bumper sticker?” I said, squeezing my eyes shut to avoid looking at the huge drop down, and hoping we’d be at the top soon.

When we reached the summit, we enjoyed a spectacular view of mountains all around. There was a large crowd of people but everyone was staying with their own group or family. We spotted a group of frum young men, and my husband suggested that they daven Minchah. So, there was a Minchah minyan on top of Mount Washington.

As we explored the mountain top we heard someone cough. I spotted the “culprit,” a man wearing an aqua t-shirt, and I whispered to my husband not to go close to where that man was walking. We kept avoiding this person as we traversed the mountain top. Now, an innocent cough or sneeze scares everyone.

On Sunday morning, we woke to a thick fog. “The mountains are wearing masks in sympathy with us,” I noted.

At night, the whole sky was splattered with glittering stars, and I realized I’d found what I was searching for. The majesty of the mountains, sparkling lakes, starry skies, tall birch trees, and fresh pure air are all reminders of Hashem’s majesty and glory. His magnificent creations reassure us that nature is here – the beautiful world is still running according to plan. And sometime very soon, b’ezras Hashem, this whole pandemic will be a distant memory of the past faded into oblivion like the fog that dissipated unmasking the glorious mountains. 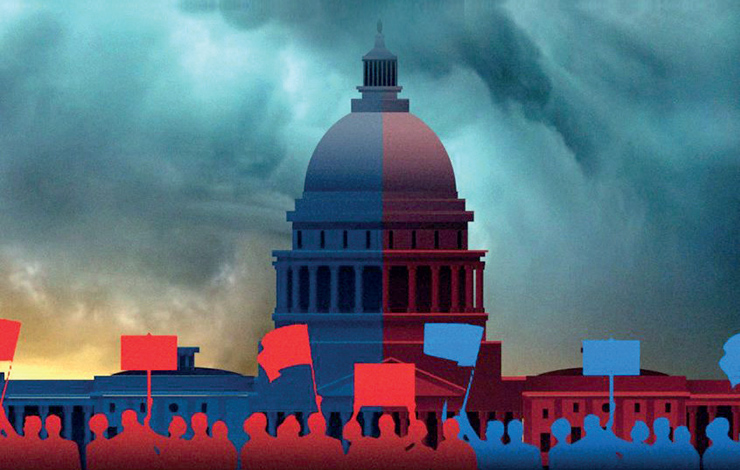 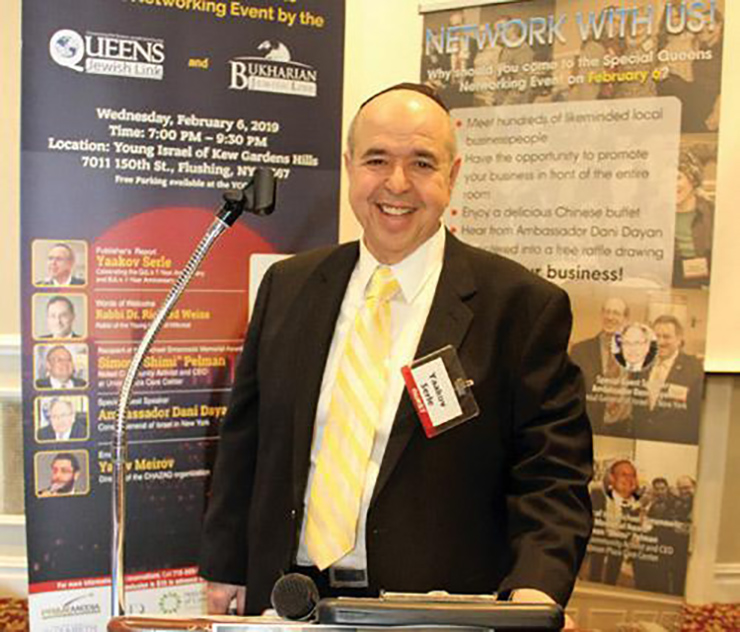