“I have never seen anything like this at a Dirshu test! I have been taking Dirshu tests for twelve years straight rarely missing a test, month in month out, winter and summer,” said Reb Moshe Baum, “but I never saw such simcha as this time! The picture in my mind of the lomdim springing out of their seats and starting to dance was a snapshot that I will never forget.”

Rejoicing in the Reopening!

Anyone who has ever attended a Dirshu testing site can attest to the atmosphere of quiet tension permeating the air. The Lakewood testing site was no different this past Sunday night, 13 Tammuz/July 5. Hundreds of lomdim came together in the first post-corona test.

Suddenly, in the middle of the test, the voice of Dirshu’s North American Director, Rabbi Ahron Gobioff, broke the silence. “The last thing we want to do is interrupt all these distinguished lomdei Torah as they take their tests, yet we must pause for just a few minutes to contemplate the chasdei Hashem. It has been nearly four months since we last came together. A lot has happened. We cannot just continue without giving shevach v’hodaah to the Ribbono Shel Olam that baruch Hashem we are back!” His words were followed by a surge of music. Hundreds of 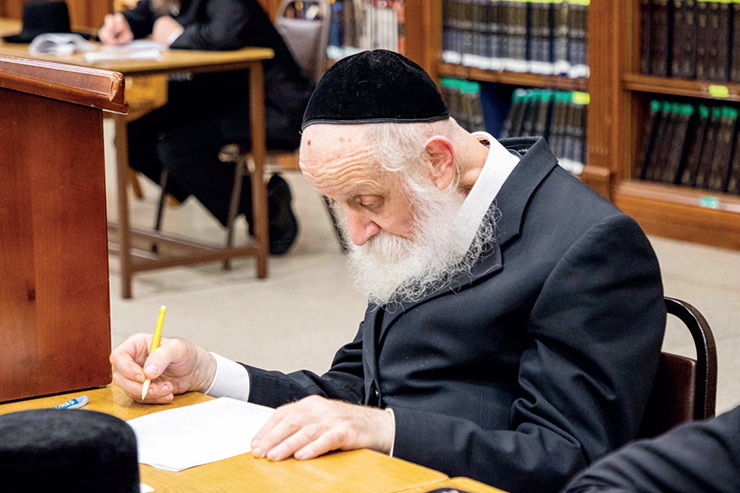 lomdim jumped from their seats and began a beautiful rekida circling the bais medrash, singing and thanking Hashem for once more affording them the opportunity to come together and take the tests after having to learn and take the tests at home for so many months.

“It was a surreal experience,” said Rabbi Eliezer Feld. “Yes, I learned my Dirshu limudim throughout the difficult corona period, even when I was sick at home with corona induced fever. Yes, I took the tests at home. My home became my bais medrash and my testing site, but it feels so good to be back and take the test b’rov am.”

On Sunday, the vast majority of Dirshu testing sites in North America reopened and the feeling of simcha was felt throughout. Whether it was Boro Park, Monsey, Williamsburg, or the summer Catskills location, in all of these locales a beautiful l’chaim with enthusiastic singing and dancing was held to thank Hashem for the zechus to again come together.

At the testing site in the Dirshu Bais Medrash in Toronto, the Nasi of Dirshu, Rav Dovid Hofstedter said that the zechus to come together and take the tests is not something we should take for granted. “We must all collectively say, ‘Hodu l’Hashem ki tov, ki l’olam chasdo’ and realize what chasdei Hashem we have just experienced by being able to come together after all of these months. Not all communities can do this yet.”

In his short remarks, Rav Hofstedter put the recent difficult period sustained by Klal Yisroel into historical context. “The transition and transformation that we underwent this year is mind boggling. We had just finished celebrating the colossal kiddush Hashem of siyumei haShas worldwide, where from all over the globe, lomdei Torah came together to celebrate the tremendous accomplishments of yedias and ameilus haTorah. Just weeks later virtually the entire world was plunged into quarantine, the kol Torah in our battei medrash, yeshivas, schools and shuls was stilled. What a contrast!

“This contrast, however,” pointed out Rav Hofstedter, “is not unprecedented. Look at our history. We had mattan Torah, the greatest gilui Shechinah possible and almost immediately thereafter, the terrible sin of the eigel hazahav. We had the climax of kedushah with the chanukas haMishkan followed immediately by the tragic petirah of the tzaddikim, the sons of Aharon; Nadav and Avihu.

“We see,” Rav Dovid observed, “whenever there is an outpouring of gilui Shechinah, revelation of the Divine Presence, the Satan fights with every means at his disposal. Thus, although of course we are terribly distraught over the situation that the world and especially the olam haTorah found itself in due to the pandemic, it shouldn’t come as such a surprise. It is the Satan again trying to neutralize the tremendous Torah accomplishments of Klal Yisroel.”

Rav Dovid ended his remarks by telling the lomdim, “It is your learning, your shteiging that is so important to Hashem. You should know that you and the whole olam haTorah are involved in a battle with the Satan! Every blatt Gemara learned and reviewed, every test you take infuses not only you, but the entire Klal Yisroel as well with chizuk! It is our task to continue, to keep on learning and shteiging until we are zoche to the ultimate gilui Shechinah when the Satan will throw up his hands in defeat, b’meheira b’yameinu!”

A Milestone of Return

“In truth,” remarked Rabbi Ahron Gobioff, “I have been simply amazed at how the lomdim maintained their learning despite illness, despite families being cooped up, despite non-optimal learning conditions… they forged on! The phones in the Dirshu offices were ringing off the hook as our lomdim sought details about test taking during the corona period and the majority of our lomdim persevered and took the tests at home throughout.”

The test on Sunday night, however, was a real milestone. A milestone of return. At the Boro Park testing site, it was such a beautiful sight to see Reb Aharon Cohen, a longtime Dirshu learner, come in with his fifteen-year old son, Chaim Eliyahu. “We were both home in quarantine. He was home from yeshiva and I was home from work in lockdown, so we decided to make a daily seder in Dirshu together. We haven’t stopped. We took the tests throughout the lockdowns and now we are coming together to the take the test at the testing site. Not only has our learning improved, but the depth of our relationship with each other has been so enhanced as well. There is nothing more magnificent, nothing more meaningful than a father and son relationship strengthened through mutual limud haTorah, day in and day out,” commented, Reb Aharon.”

Perhaps the words of Reb Yossel Wein, a test taker at the Lakewood site encapsulated the feelings of so many others who finally came together to take a test after all these months. “When we were dancing to the tune of ‘Ashreichem talmidei chachomim’ at the Dirshu testing site, I couldn’t help but think how lucky I am to once again be together with all these talmidei chachomim! There is so much that we have to be thankful for: our health, the health of our family members and most of all that we are able to continue learning Torah! What better place to celebrate this and to thank Hashem profusely than with our like-minded Lomdei Dirshu!”