Global fashion weeks that are politically motivated always raise my suspicions, especially with “of the moment” themes such as #metoo movements and results of the Weinstein trial. During Paris Fashion Week, Christian Dior relied more on feminist flea market signs than on new looks for the runway. It was as if they got lost at sea and live on an island of current events, losing the art of fashion to the world of headlines. Motty Reif’s Tel Aviv Fashion Week (March 15-19) celebrates positivity with energy of love and acceptance. Living in Israel, you can easily succumb to a myriad of divisive and negative frameworks, such as elections, terror, and the quest for peace and world acceptance. These could be four hot topics that would dictate any fashion week runway series. However, Motty stays true to who he is: an admirer, lifelong appreciator, nurturer, and sustainer of a women’s true self from the inside first and then the outside, as a complete canvas for beauty. 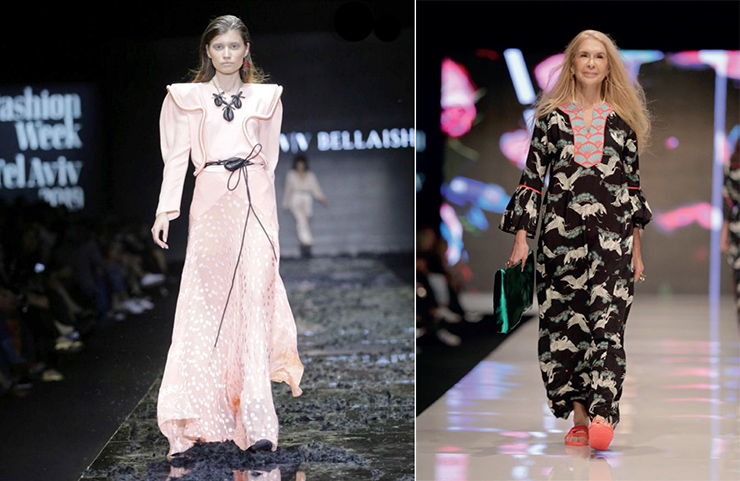 When you research Motty Reif, you immediately conclude that there is nothing he can’t do. Israel’s answer to Simon Cowell, Tony Robbins, and Anna Wintour, all rolled up into the most famous and iconic cultural figure in the Middle East. During TLVFW 2015, I was a guest of his production company and the bureau of Israel tourism/business council, as I was surveying for potential business in the U.S. At the time, Motty was producing a three-day fashion event in conjunction with the completion of a new Gindi-owned mega brand fashion mall in Tel Aviv. The amount of shows, designers, models, makeup teams, hair teams, production crews, lighting crews, security, sponsors, and attendees was staggering, but Motty remained the cool major general in the fashion armies he commanded. I was so impressed and amazed, I tried to figure out any way to work with him in NYC. We collaborated in 2016 with Shankar School of Design and the Israel Day Parade to have the first fashion float with models and Israeli diplomatic figures. He couldn’t be more gracious with his knowledge and enthusiasm. I went on to produce three NYFW fashion shows with Israeli Designers Maya Negri, Nirit Dekel, Matan Shaked, Keren Wolf, and Inbal Dror.

Motty’s Tel Aviv Fashion Week welcomes diversity. Modeling standards are spun around with many sizes, ages, and races. “I believe that in the fashion industry there can’t be only one type of model,” said Motty Reif to Vogue. “I have been working 33 years and I have been listening to women all my life saying, ‘This is beautiful, but it isn’t for me.’ The fashion industry has a responsibility to change that.  Imagine if fashion labels used models parallel to their clients?” That’s a very bold statement coming from the man who calls Bar Refaeli his BFF. Motty could adopt a haughty attitude with his movie productions, TV shows, photography exhibits, real estate consulting, and large lifestyle, but he’s surprisingly and unexpectedly humble.

When I texted him my list of questions, he was knee deep in preparations for the upcoming TLV Fashion Week sponsored by Dove. He’s continuing his multi-mega beauty boom. How do you ask someone like this about G-d?

Tobi: Do you think your talents are G-d-given?

Motty: I believe that each of us come into this world with a purpose, being talented is part of your tools and role, you can improve it and use it to invent yourself with that G-d-given gift.

Tobi: How has your faith been incorporated into your work?

Motty: I believe that everything in my life, especially my work, starts with faith. Diligence and hard work are the other important steps to success.

Tobi: Has fashion become faithless, or is faith now fashionable?

Motty: I see fashion as not only clothing, it’s the way we feel about ourselves. Fashion can be used to feel better about ourselves. However, fashion today has more faith than ever. My work in celebrating women of all shapes and sizes is proof that fashion has grown up to include “faith in oneself.”

Motty: My work has so many different beats, it is a long session of music that sounds like a brilliant symphony, a musical prayer.

He apologized to me that it took a bit longer to get back to me because he’s so busy. That’s an understatement, considering how much he is in demand. Motty Reif has a treasured quality called humility despite the glamorous job he chose as his purposeful career path. I read an article in chabad.org by the great Chief Rabbi Jonathan Saks where he says “true humility is one of the most expansive and life-enhancing of all virtues. It does not mean undervaluing yourself. It means valuing other people. It signals a certain openness to life’s grandeur and the willingness to be surprised, uplifted, by goodness wherever one finds it.”

Motty found all that in the most unlikely place ... fashion!