The MakerSpace at NYU Tandon School of Engineering became a shark tank of sorts on Tuesday, April 30, when high school students dove into entrepreneurship to pitch their robotic inventions to a panel of experts. The event was the finale of the second annual NYU ITEST InnoVention competition, a National Science Foundation-funded project aimed at showing metropolitan-area high schoolers and their teachers how robots can turn STEM (Science, Technology, Engineering, and Math) into a scintillating team sport with real-world applications.

Midreshet Shalhevet (MSH) of North Woodmere’s research team – juniors Zahava Ganchrow, Tal Gaon, Avigayil Roffe, and seniors Becky Haviv, Hadassah Krigsman, and Maayan Sandowski – won second place with The Water Bot, a robot that aims to promote proper hydration of students in schools. One of the students on the team will be chosen to participate in a two-week paid internship at Silicon Harlem this summer, as part of the award.

The MSH students, their teacher Aliza Feder, and NYU ITEST fellow Shivam Bhardwaj, the only all girl team in the pool, competed against teams from all five boroughs and Long Island, representing technical high schools, STEAM academies, and NYC public schools, who brought robots, presentations, and talking points to the MakerSpace to vie for bragging rights.

The competition was to identify a problem in their school’s environment that can be addressed using a robot. The teams were tasked to survey their schools, carefully analyzing opportunities for a robot to make a significant impact on the school community. They used Vex Robotics platforms to build the structural elements and mechanisms of their robot, along with an array of sensors and Arduino microcontrollers, and were allowed to spend no more than $20 for other materials.

The MSH team surveyed their school environment and identified that although most students know water is healthier than juice or soda, they tend to choose non-water drinks.

They found that when water is out of sight, it’s out of mind; students don’t take the initiative to go get the water. MSH’s team’s solution to this problem is to bring water to the students. They built a robot that follows a line to the vending machine, interfaces with the machine to collect bottles of water, and distributes them to each classroom twice a day. Each student has an ID card to count how many water bottles they take, and reports it to the school office, which can issue positive reinforcements for creating healthful habits.

The teams had to market their solution to potential investors by creating a short video explaining how they came up with the problem, and the solution – how the robot helps address that problem.

Judges scored the submissions on their design, product name, aesthetics, programming sophistication of logic behind the code, complexity, and approach taken, human interface, and use of sensors, actuation, and mechanism. They considered the teams’ entrepreneurship and market analysis, and the presentations. The teams were scored on their visuals, content, and video, addressed the challenge and showing a fully functional prototype of their proposed solution, to be used as a commercial for the eventual product.

The NYU ITEST program kicked off last summer when 16 teachers and 32 students from schools representing all five boroughs – most in underserved neighborhoods with diverse student bodies – participated in a month-long intensive program to learn how to incorporate robots into their STEM curricula. Last summer, Avigayil Roffe, Chaya Roffe, Tamar Waronker, and Esther Conway, and teacher Aliza Feder, participated in the program and spent two weeks on full-time guided training and another two on robotic-product development.

Feder brought her experience back to MSH this fall, where she launched an advanced robotics course, where NYU Tandon student Shivam Bhardwaj made regular visits, building the blocks necessary for the girls to be able to enter and compete in the ITEST competition. 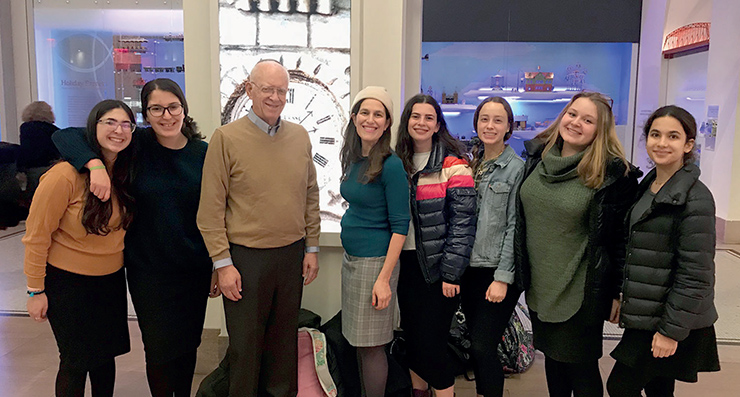