That last week of June in Mississippi was hot – so hot that you couldn’t stay outside very long. It was a frying-an-egg-on-the-sidewalk kind of weather. The heat rose in waves from the cement in Neshoba County. People moved as slowly as their drawled speech. I went to work every day in the dry cleaners.

I worked alongside Ben. He rarely joked around. Despair hung over the air.

An FBI agent appeared at the door one day as we were finishing up work. “You Yonah Hartstein?” he asked.

“Come with me,” he said. “We found something.” Ben trailed behind us. The man walked quickly. I had to almost run to keep up with him. “We found something” didn’t sound too promising. I wanted him to say, “We found the men.” Ben sidled up next to me. “Maybe they found my brother?”

The agent turned to me. “I think we found their car. It’s near Philadelphia. I want to take you there to verify its identity.”

Can he come?” I pointed to Ben who was staring down at the sidewalk. “His brother is one of the missing men.”

The FBI agent nodded. We both slid into the back seat of the black station wagon with tinted windows. Funny how I noticed the type of car it was. It wasn’t something I would usually think about, but today details seemed important, since none of what had happened this past week seemed real. My three friends were arrested and disappeared and I’m riding in an FBI car. It didn’t feel real.

We rode in silence. Ben was staring out the window. I saw his legs were shaking. I felt so bad for him. We drove towards Philadelphia, Mississippi, on dirt roads where there wasn’t much traffic. He passed the main drag of the city and headed towards a swampy area, pulling up in a secluded spot. After stopping the car, he motioned for us to get out. He led us down a long dirt road. The sun was beating down. I felt sweat pouring down my back.

Behind some trees and brush, I spotted it. The blue sedan, like a fallen animal, lay among the bushes. It was burned out. The windows and doors were gone. All that remained was the shell of a car. I felt a horrible sinking feeling. My eyes welled with tears. Someone had totally burned the car.

I shouldn’t have brought Ben with us. The FBI agent put his arm on Ben’s shoulder. “We don’t know that son. This is just the car. We don’t know. They could still be alive.”

Ben wiped his eyes with the back of his hand and tried to stop his uncontrollable sobs.

“Is this their car?” the agent asked me. “Please examine it and make sure so we can identify it.”

I approached the burnt shell of the blue Ford. My whole body was trembling. The violence done to the car felt visceral. The smell of the burnt metal was nauseating.

I turned away and nodded. “This is it, sir.”

Ben was quiet on the nine-mile ride back to Neshoba. I didn’t feel like talking either. I watched the scenery and wondered where Mickey, Andy, and James were. I said t’hilim by heart and hoped they were still alive and safe.

Later, I saw reports about the burnt car on the news and pictures of Mrs. Schwerner coming to Neshoba with an FBI escort. She demanded to see the car.

The next day, I noticed Mrs. Schwerner in the window of Woolworths. She motioned me to come inside. She was sitting at a table with an FBI investigator. “This is Yonah Hartstein,” she told him. “I’m so glad to see you. Maybe you have some information. We aren’t getting anywhere. When did you last see my husband?”

“I saw him and Andy and James that day when we went to look at the burned-down Zion Church.”

“Tell me what happened.” She was wearing dark glasses. Her voice was steady, but I saw that her hand on the handle of the coffee cup was trembling.

“It was hot,” I said, thinking of that horrible day. “The sheriff demanded that we change the flat tire. The tire just blew on us.”

“Could a tire just blow like that when it was just checked out?” she asked. “Someone did it to the car. I am sure someone did.”

The FBI agent was silent. He was also wearing dark glasses and recording everything we said on a pad of paper.

“So, James changed the tire and Andy and Mickey went out to help him. Then the sheriff demanded to see our identification. He told me to leave and he drove away with them.”

Rita nodded her head slowly. “I was in the training in Ohio this week and I told everyone there to send letters to Congress and to the President – to put pressure to find my husband.”

“I hope they find them soon,” I said, hoping those were the right words to say.

She was chain smoking.

I felt so bad for her.

I wished I had really done something she could thank me for. I lumbered away from her, feeling so sad and discouraged.

Andy Goodman’s parents came to Mississippi, too. His mother spoke to reporters. “We would let him go again if we had to make the decision, but I just pray we can find my son alive.”

Henry was asking me lots of questions about Yiddishkeit around then, and I found myself digging deep into my own emunah to answer him. Why this evil was going on here and my friends were missing: I couldn’t find an answer, but I had to believe everything Hashem does is for the best and we can’t understand it. I thought often of that needlepoint analogy that my grandfather used to tell me. “We can’t see the masterplan, the beautiful design, on the other side. All we see is the loose threads in this world. We can’t understand.”

I was lost in my thoughts as I made my way home from work the next day. I didn’t notice a group of people walking nearby. Suddenly, Jed and his two burly friends appeared out of nowhere. I felt my stomach clench. I glanced around me. There was no one around. I was trapped. 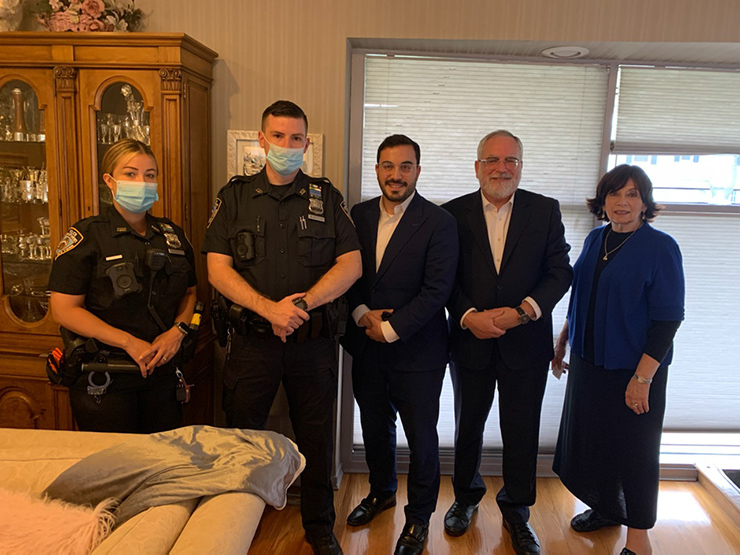