“If only,” a member of Agra D’Pirka recently observed, “I could be in five places at once.”

He was speaking, of course, about the special Memorial Day legal holiday program that Agra D’Pirka offers at five different locations. Every day at Agra D’Pirka is special, of course. But the legal holiday shiurim are in a class by themselves. Riveting topics are explored, outstanding presentations are shared, thought-provoking concepts are examined, and an overall sense of focus and fulfillment is achieved. It’s simply the very best way to spend a holiday morning.

Agra D’Pirka is an organized morning learning program geared towards local professionals, business owners, college students, retirees, and anyone else who wishes to increase his limud haTorah. The program runs from 9:30 to 11:30 a.m. with an impressive roster of magidei shiur at each of its eight locations. Those who are already involved in Agra D’Pirka are singing its praises. And once they get started, they usually maintain a permanent commitment. The Memorial Day special program was held in Queens, Flatbush, Lakewood, Monsey, and Miami. 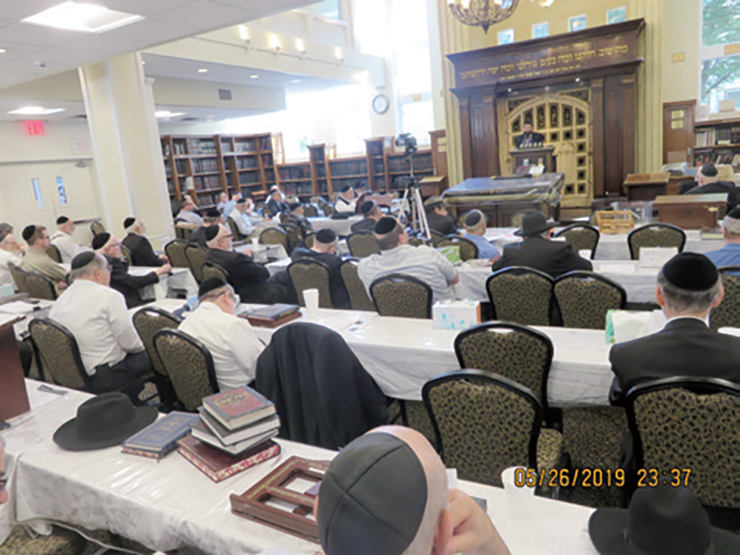 In Queens, Rabbi Noach Oelbaum explored the relatively unknown yet fascinating topic of whether one is permitted to sell land in Eretz Yisrael to a non-Jew. He pointed out that there’s a lav in the Shulchan Aruch against selling property in Eretz Yisrael to a non-Jew, to give him possession of the land. He explored various sh’eilos that were presented to the Chazon Ish on this topic. He was asked if someone is permitted to swap or exchange karka (parcels of land) in Eretz Yisrael with a non-Jew. The Chazon Ish answered that it is not permitted, stating, “We don’t trade mitzvos for aveiros. It’s a mitzvah to retrieve karka from a goy, but not through an aveirah (of offering him other land in exchange).”

With Shavuos just days away, many of the shiurim focused on inyanei ha’chag. In Flatbush, Rav Aharon Kahn discussed fundamental themes of kabalas haTorah. He explored the concept of “Naaseh v’Nishma,” quoting a Gemara about Rava who was so immersed in his Torah learning that he didn’t realize his finger was bleeding. “Torah demands total and absolute concentration,” Rav Kahn explained. “Otherwise you can’t be Rava.”

Where does that intense commitment and focus come from? Said Rav Kahn, “When something is so significant, then your commitment is absolute.”

In contrast, the non-Jew does not understand this powerful focus. “It bothers the goy that our commitment is so profound,” Rav Kahn explained, “because his life is so empty.” Anti-Semitism, he added, comes from kin’ah. “The goy cannot tolerate that a Yid has such ahavah for these words. So there’s a tremendous kin’ah.”

But a Jew, he continued, has to understand that “ki heim chayeinu” is the essence of who we are. The Jews will prevail as long as they learn Torah. “What defines the Jewish people?” he asked. “What is everything centered on? What makes us tick? What is the essence of our being? The answer is Torah.”

Rav Daniel Glatstein, who spoke next, took an entirely different approach in discussing Shavuos. He focused on the question of what to learn on the night of Shavuos, on whether to recite the Tikun Leil Shavuos or to learn Torah she’b’al peh.

Drawing from a vast number of m’koros, Rabbi Glatstein explored the subject in depth. He shared the opinions and the customs of the Steipler, the Chazon Ish, the Dubno Maggid, the Sh’lah, the Ben Ish Chai, the Magen Avraham, the Chok Yaakov, and others.

Meanwhile, at the FountainView in Monsey, the Agra D’Pirka legal holiday program was heralded as “an uplifting event.” Rav Dovid Margareten started the morning with a shiur on the topic of keeping one or two days of Yom Tov. He discussed the many different opinions on this.

In the second shiur, Rabbi Pinchas Jung discussed emunah and bitachon during the year of Sh’mitah. He concluded that everything that happens is from HaKadosh Baruch Hu, especially in Eretz Yisrael.

The Lakewood community was fortunate to enjoy three Memorial Day special shiurim, each one an eye-opening experience. Rav Simcha Bunim Cohen spoke first about the greatness of Hashem and how important it is to live for Olam HaBa. Then Rav Dov Kahan spoke about Matan Torah and how k’rias haTorah in the Taam Elyon is a re-enactment of Maamad Har Sinai. Finally, Rav Micha Cohn discussed the concept of credit unions and corporations in halachah, specifically regarding ribis applications and the various issues that come up.

Finally, the Miami Beach community was treated to a unique shiur given by Rav Reuven Brown on the topic of “Can You Trust Your Rabbi?” Rav Brown explored the concept of machlokes in halachah. He discussed what to do when poskim disagree, who determines which is a valid p’sak, when is eilu va’eilu relevant, and how has halachic p’sak changed throughout history? Until Beis Shamai came into play, he indicated, there was no machlokes. But Rabbi Yochanan actually enjoyed machlokes because he felt it sharpened Torah learning.

Guest speaker Rav Ephraim Shapiro then spoke about counting toward Shavuos and how to prepare for kabalas haTorah. He discussed the chashivus of Torah and encouraged parents to share with their children the importance of Torah in order to continue the mesorah for future generations.

Naaseh v’Nishma, Tikun Leil Shavuos, selling karka in Eretz Yisrael, keeping two days of Yom Tov, Emunah and Bitachon, the greatness of Hashem, k’rias haTorah, and corporations in halachah – there were so many intriguing and essential topics, so many outstanding and esteemed magidei shiur. No wonder Agra D’Pirka participants are wishing they could be in five places at once.

Memorial Day may be over, but Agra D’Pirka continues to grow and flourish. Reb Ezra Klein, founder of the program, encourages more community members to join the daily morning program. “Please come,” he says. “We are learning at the feet of the masters. And it’s indescribably delicious.”